A plane had to turn around and fly 1,600 km back home because a man on board claimed to have caught the Wuhan coronavirus A WestJet flight from Toronto to Montego Bay, Jamaica, was forced to turn around after a man stood up and declared that he had contracted the coronavirus while on a recent trip to China.

Peel Regional Police said in a statement that at around 1 p.m. local time on Monday, 28-year-old James Potok announced mid-flight that he had contracted the deadly virus, which has so far killed at least 426 people and infected more than 20,000 across 24 countries.

According to police, the announcement was shared with the flight crew, who made the decision to return to Toronto's Pearson International Airport. The man was assessed upon landing back in Toronto at about 2 p.m. and was deemed symptom free.

Potok was charged with mischief and is due in Ontario court in March.

Data from FlightRadar24 shows the plane's flight path. The aircraft appears to have turned around about two hours into the flight near Jacksonville, Florida. 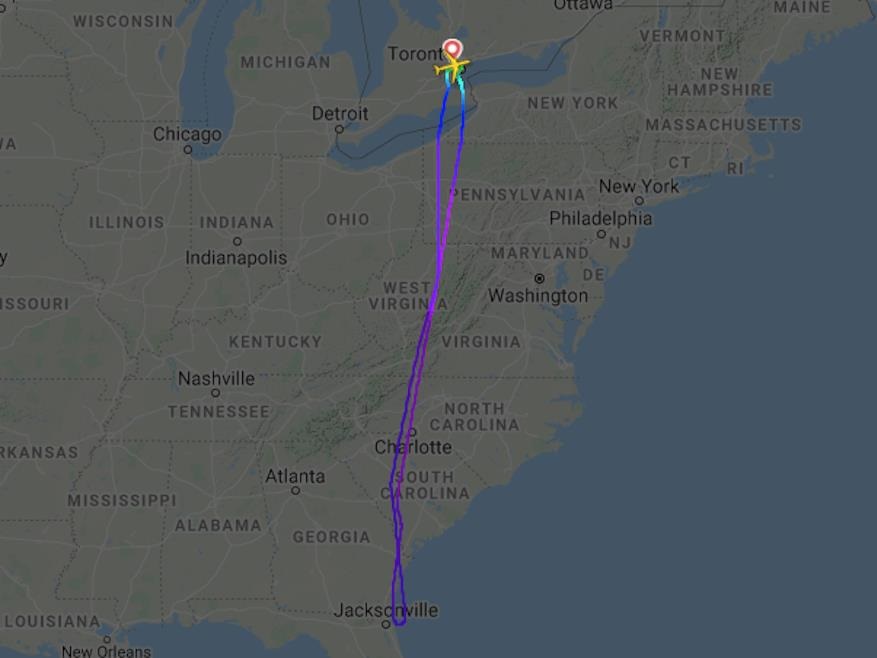 The flight path of Flight WS 2702 from Toronto, which returned to Pearson International Airport after takeoff.
FlightRadar24

WestJet said in a statement to CBC that the crew onboard followed the appropriate procedures for infectious disease, including isolating the man. They also apologised the incident.

Five people have tested positive for the virus in Canada, including three in Toronto and two in Vancouver, as of Tuesday.

At least 62 airlines have canceled flights to China amid coronavirus fears.

On Sunday, Canadian Prime Minister Justin Trudeau convened a special incident response group to discuss the outbreak and efforts to contain the virus in Canada.

"The government remains fully engaged on the issue, and will do all that is necessary to ensure the safety of Canadians, both at home and abroad," Trudeau said in a statement.

Trudeau also said that a chartered play would fly to Wuhan, China - the epicenter of the disease currently on lockdown - in the coming days to evacuate Canadians trapped in the city.