Turkey doesnt want to hold onto foreign ISIS fighters but neither does the rest of the world. So where will they go? Last month, US President Donald Trump made the abrupt decision to pull the remaining US troops out of Kurdish-controlled areas in Syria.

The move sent the fragmented country into a spiral, disrupting one of its few areas of stability. By withdrawing support from Kurdish forces in the area - which had helped the US combat ISIS - Trump opened them up to an oncoming offensive by Turkey.

Justifying the decision. Trump argued that US forces in the region had already "defeated" ISIS, and that therefore there was no need for them to stay in Syria.

This was, at best, only partly true.

While US-allied forces this year deprived ISIS of the territory it once controlled, the group still has as many as 18,000 fighters quietly stationed across Iraq and Syria, according to The New York Times.

Additionally, Kurdish-led fighters, known as The Syrian Democratic Forces (SDF) had maintained control of tens of thousands of former ISIS members and their families, including about 70,000 women and children in a compound in the Syrian city of al-Hol, according to the Atlantic. Of those detainees, 11,000 of them are foreign nationals, according to the BBC.

The SDF has said it is holding more than 12,000 men suspected of being ISIS fighters across seven prisons it operates, estimating that more than 4,000 of those prisoners are foreign nationals, the BBC said.

The fate of those prisoners remains uncertain, particularly in the wake of the US pullout.

Turkey has taken over parts of Syria, and with it, ISIS prisoners On October 22, Russia and Turkey took advantage of the power vacuum that had been created and signed an agreement to expand their control in Syria and minimise Kurdish territory.

As part of the deal, Russian military police and Syrian border guards entered the Syrian side of the Turkish-Syrian border, pushing Kurdish forces back to 30 kilometers from the border.

Turkey says it will use the reclaimed area to create a "buffer zone" along its border and will use the land to resettle more than 1 million Syrian refugees displaced by the war.

But as Turkey gains land in Syria, it has also taken on the task of figuring out what to do with former Islamic State detainees, many of whom are now under its control. Turkey has faced criticism in the past for its porous border, which allowed foreign fighters to enter Syria and join the Islamic State to begin with.

But Turkey doesn't want to deal with them, and neither does the rest of the world

According to a 2016 report by the World Bank, foreign ISIS fighters have been recruited from "all continents across the globe," though it named Russia, France, and Germany as the top Western suppliers of ISIS' foreign workforce.

Data from the Institute for the Study of War also indicated that significant portions of foreign fighters also came from European countries like the UK, Belgium, and France between December 2015 and March 2016. 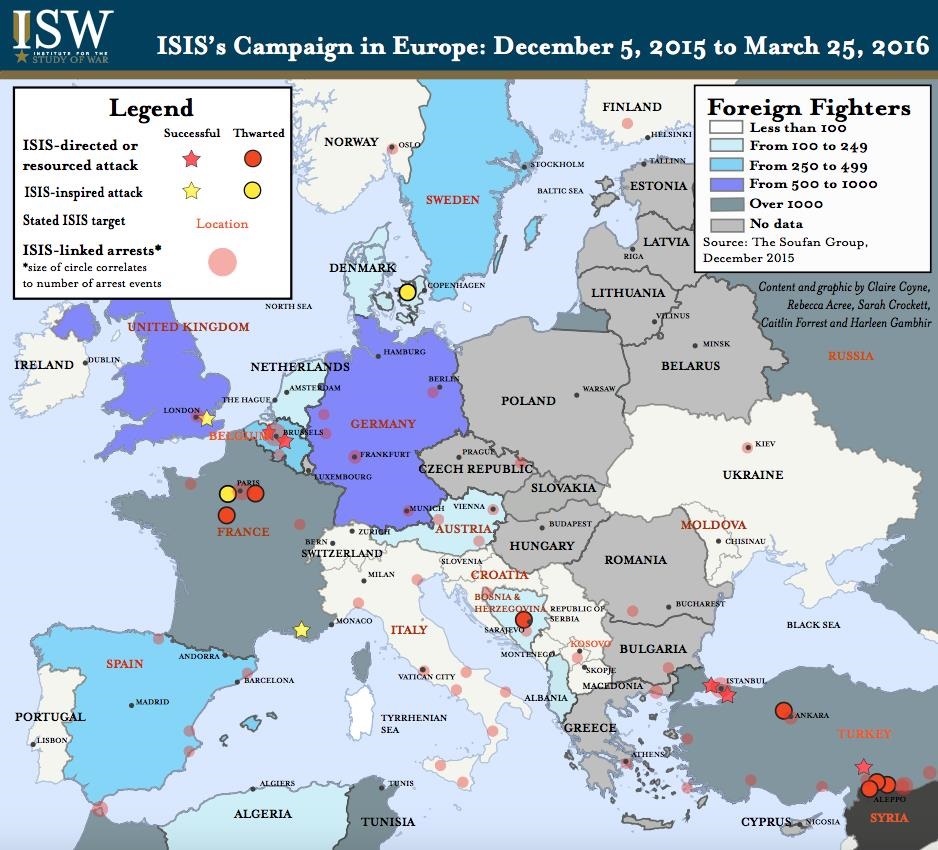 Interior Minister Suleyman Soylu said last week that about 1,200 foreign ISIS fighters were in Turkish prisons, and warned that Turkey would not become "a hotel" for militants.

On Monday, Turkey began deporting foreign nationals said to be linked to ISIS back to their home countries.

One of those foreign nationals was from the US, a spokesperson for Turkey's interior minister said, though according to the BBC the man remained stranded at the Greek border after choosing not to return to the US. On Thursday morning, Turkey's Interior Ministry said that the man would be brought to the US.

Turkey's interior minister added the country was planning to deport "several more terrorists back to Germany" this week, and that legal proceedings against two Irish nationals and 11 French citizens captured in Syria were underway. A spokesperson for Germany's foreign ministry confirmed to German broadcaster Deutsche Welle that three men, five women and two children were being returned to Germany this week.

But many of those countries have not put a concrete policy in place for what to do with ISIS foreign fighters or their families that remain in displacement camps in Syria, or have refused to allow them to return.

Trump said in his statement in October that he discussed the issue of repatriating foreign fighters with France, Germany, and other European nations but they "did not want them and refused."

Foreign nationals abroad are traditionally entitled to consular services abroad, though many European nations have been cautious about offering help to citizens who joined ISIS on national security grounds. Under international law, it is illegal to strip people of their citizenship if it will leave them stateless.

In April, Germany approved a bill stripping dual nationals of their citizenship if they traveled overseas to fight in a foreign terror group, though the law does not apply to women and children. In June, France passed legislation stating that it would repatriate French jihadists on a case-by-case basis. But the UN has stood firm on pushing countries to take responsibility for their citizens.

"It must be clear that all individuals who are suspected of crimes - whatever their country of origin, and whatever the nature of the crime - should face investigation and prosecution, with due process guarantees," said Michelle Bachelet, the UN High Commissioner for Human Rights, in June.

"Foreign family members should be repatriated, unless they are to be prosecuted for crimes in accordance with international standards," she added.

The UK is currently debating what to do about those who left the country to join ISIS. In February, it stripped British-born Shamima Begum, who traveled to Syria to become an ISIS bride at the age of 15, of her citizenship, citing national security risks. Begum has appealed the decision, and the UK government is said to be considering options for repatriating British members of ISIS held in prison camps in Syria.

As the West works through the complicated process of absorbing foreign fighters, Islamic State militants in Syria appear to be taking advantage of the chaos.

Last month, the SDF said ISIS fighters committed three suicide bombings on its positions in Raqqa as Kurdish fighters moved from their posts to respond to Turkish assault. And SDF General Mazloum Kobani has warned on Wednesday that the West should "expect" major attacks from Islamic State fighters who may be looking to capitalise on the chaos in order to regroup.

"The danger of the resurgence of ISIS is very big. And it's a serious danger," he told Sky News.