The Barloworld and Caterpillar head office and showroom in Isando, Johannesburg

Over the past year, despite the challenges in the local construction industry – of late exacerbated by the pandemic - there was no shortage of innovative structures erected across the country.

Last week, the Southern African Institute of Steel Construction (SAISC) awarded its Steel Awards 2020 to some of the most exciting projects completed in the past year in the country.

They included a house built from light steel within 28 days, as well as a cool farm school and a massive warehouse built in just six months. The new bridge was the bigger winner this year, winning the overall prize as well as triumphing in the bridge category. Last year, it replaced a 22-year-old bridge. Every year, the bridge carries 2.4 million people per year and it has to open and close 60 times a day, to allow boats to pass.

The bridge itself is more than 40m long and 3m wide with the mast section extending over 10m into the air.  Once completed it weighed more than 40 tonnes. 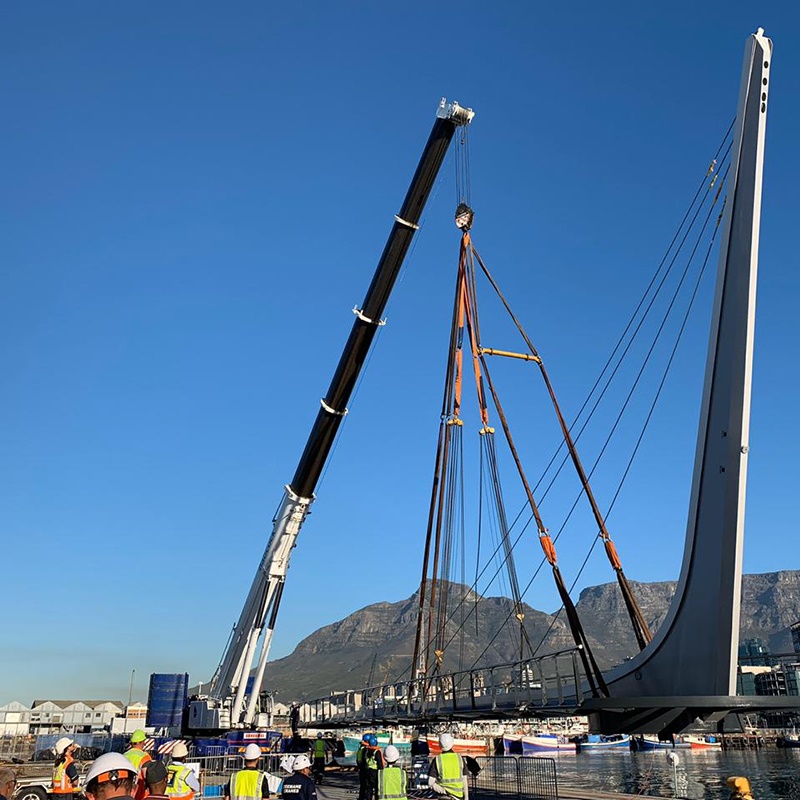 Lifting the swing bridge into place.

It was praised for "the combination and integration of mechanical, structural, marine, geotechnical, construction and architectural expertise to create a simple but beautiful structure that moves". It also made use of a so-called “slew bearing” - a technical innovation not seen before in Africa

To limit disruption to the V&A, the bridge was assembled on a nearby jetty. Once completed the bridge was carefully craned onto a barge and towed to its final position. The bridge was then lifted off the barge and mounted onto the slewing bearing.

The new Barloworld and Caterpillar head office and showroom in Isando The development consists of Barloworld's head office as well as a Caterpillar showroom and a new training campus.

The 4,500 m² project actually consists of two elongated buildings, that are bubble-shaped: a double-storey north building and a three-storey south building linked by an enclosed glazed bridge. "Architecturally the only straight feature in the double structure is the glass frontage," says Paragon Architects. The exterior of the Botha’s Halte farm school reflects the colours of the environment.

The new primary school building was designed by Meyer & Associates Architects Urban Designers to replace a dilapidated farm school. Although the project was privately sponsored, the school is operated by the Western Cape Education Department and 250 learners from the farmworker community attend the school. A walkway on the Botha’s Halte farm school,

The judges say the most spectacular aspect of the building is the tubular steel “tree columns”, found in the central library. The four “tree columns”, each different in its configuration, are individually sculpted and constructed from tubular steel sections, fitted and welded together, to carry structurally, a large central concrete roof and planted roof above. “Four light scoops pierce through the roof garden above, and light up the ‘tree columns’ itself, similar to the light filtering through the tree canopy in a forest, to provide a soft even natural light quality.” The buildings operate largely off the grid, with solar and wind generating capacity – the benefit of this is demonstrated to learners via interactive displays. Stormwater is harvested and stored in a reservoir under the buildings, from where the grounds are irrigated. The most impressive technical aspect of this staircase - built as part of a retail and office development - is that it could be 100% manufactured off site, and installed as a retro-fit item. The precision of the staircase, and the complexity of the installation makes this quite an accomplishment, the judges say. The construction process of the staircase.

“The biggest challenge was the enormous weight of the staircase in terms of dead and imposed live loads, along with the millimetre precision which was required to make all interfaces perfect.” Tass Engineering was responsible for the project. The client, Century Property Developments, wanted to attract tenants for a Midrand apartment development by providing a "lifestyle hub" which features a movie theatre, spa, games room, restaurant and gym. The design incorporated a natural koppie and features a bridge and walkways, which limited the environmental impact of the construction. Construction on The Precinct Lifestyle Hub.

The design and construction firm RAW Module came up with a modular house that can be built in 28 days.

By building on an existing slab, the bulk of the house’s structure is erected on the first day on site. By the end of day 1, all modules and structural posts are fixed to the slab. By day ten, all exterior structural work and interior drywalls are completed. After this, the interior work can commence. As the modules hold most of the small items that take a lot of time to fit, so the interiors can be completed quickly.

It recently built this 158m2 house on a stringent World Heritage Site: 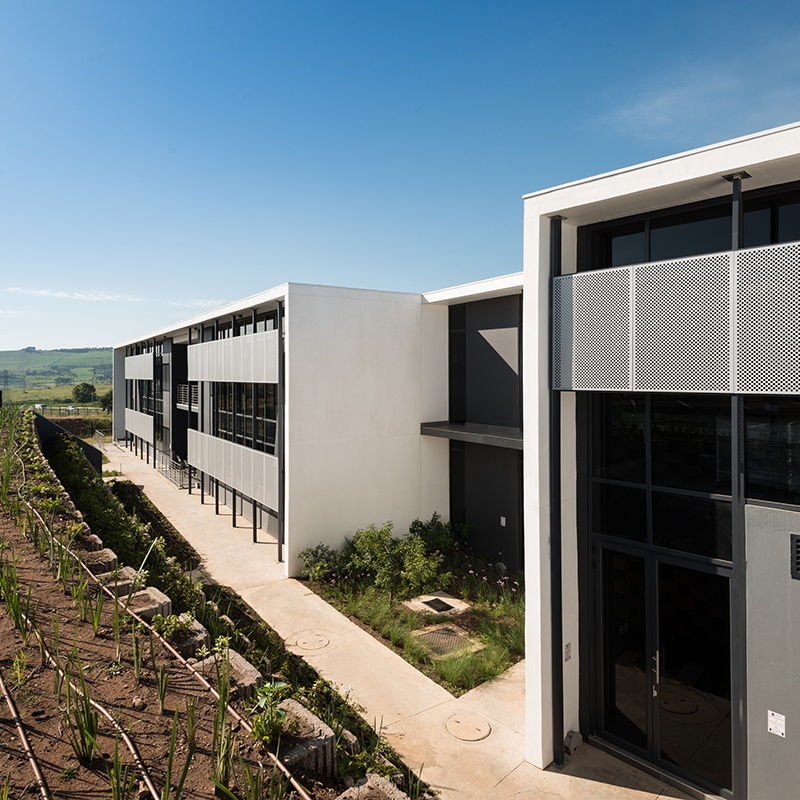 The large distribution warehouse was built last year on a sloping site alongside the N3 Freeway.

“In order to render warehouses financially feasible, the structural steel design needs to be as light as possible. Under normal circumstances, the result is a simplified box with uninspiring aesthetics,” the judges say. But the architects innovated, and added striking features to the external structure that don’t cost much, but produced a “most impactful visual impression but at a negligible cost considering the scale of the structure”.

This includes the use of red fire water supply pipes as well as steel lattice work. White edging contrasts with the dark colour of the sheeted box which is further enhanced with lighting. Ries Shaw Architects designed the project. The new steel stairway was designed for CapeNature’s De Hoop Whale Tail. The stairway was needed to replace the unsafe timber and wire rope ladder that leads down to a renowned swimming cove at Stilgat

“With an increasing trend in the average age of hikers, the client realised that the route either had to be closed or made safe. Cable or chain ladders were considered too risky for the profile of the hikers and a stairway was approved for the path to Stilgat,” said design firm ParaMatic.

CapeNature wanted a stairway that was aesthetically unobtrusive, with minimal use of cement works.

No survey data on the site was available, and ParaMatic had to use a 3D scanner to capture the site

While it was initially expected that the finished material would be delivered by helicopter, owing to the remoteness of the site, this wasn’t needed in the end, thanks to accurate, finished sub-assemblies in small, portable, site bolted frames. Almost six tons of steelwork were used for the stairs. 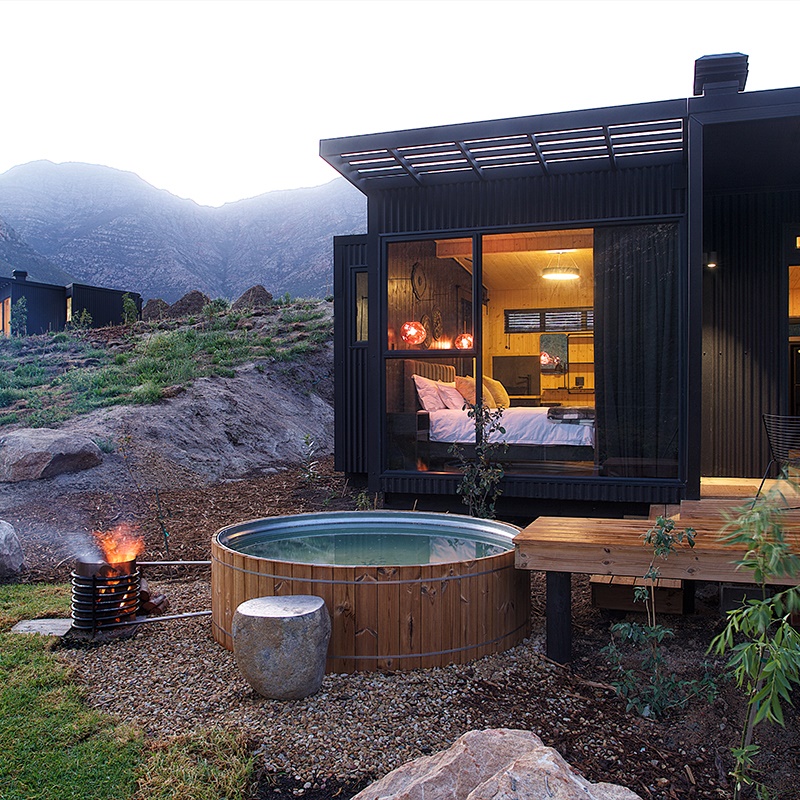 The client briefed the architect to design pod units for a vacant portion of the farm to be used as guest accommodation, and initially requested to make use of shipping containers to form the structure. The architect underwent a process of investigating repurposing shipping containers but due to the limitation in design, challenges with transport and the complexity of building with containers, working with light steel was suggested. This paid off - in the end, the construction was simplified, and the time on site limited. The new addition to the mill – constructed within a “severely confined space” – added 24 woodchip conveyors which are up to 200 metres long, as well as other conveyors to the site. The judges praised the new design’s unique four-conveyor, double-decker, walk-in type gallery, with the gantry bridge spanning 45m, at a height of 24m, over the existing sulphur plant. The new system - designed by TAKRAF Africa - helped to increase production at the Saiccor mill from 780,000 tonnes per year to 890,000. The massive 41,000m2 warehouse was built in only six months, and required large minimally obstructed spaces to accommodate the production lines and to move materials. Related Links
TAKE A LOOK | A futuristic glass skyscraper shaped like a blooming flower is being built in Hong...
China is building a high-tech 'Covid-proof' smart city designed for future lockdowns
TAKE A LOOK | Inside Capitec's shiny, curvy new head office
Next on Business Insider
These historic SA wines, some from the 1940s, are up for auction - and may fetch R40,000 per bottle