Experts question if sea turtles are thriving during lockdowns Depending on location, sea turtles may face new obstacles as lockdowns close off beaches to humans.
Sea Turtle Conservancy

The world's population is on pause and beaches around the world are deserted. It's just in time for sea turtle nesting season.

These empty beaches have conservationists questioning how lockdown measures will affect sea turtles around the world.

"The news is not all great in terms of how this virus is affecting turtles," David Godfrey, the executive director of the Sea Turtle Conservancy, told Insider.

In some locations, closed beaches have clear positives for turtles. But in other regions, conservationists are concerned that empty beaches might see an uptick in poaching. Either way, experts are unsure if these lockdowns will have any long-term impact. 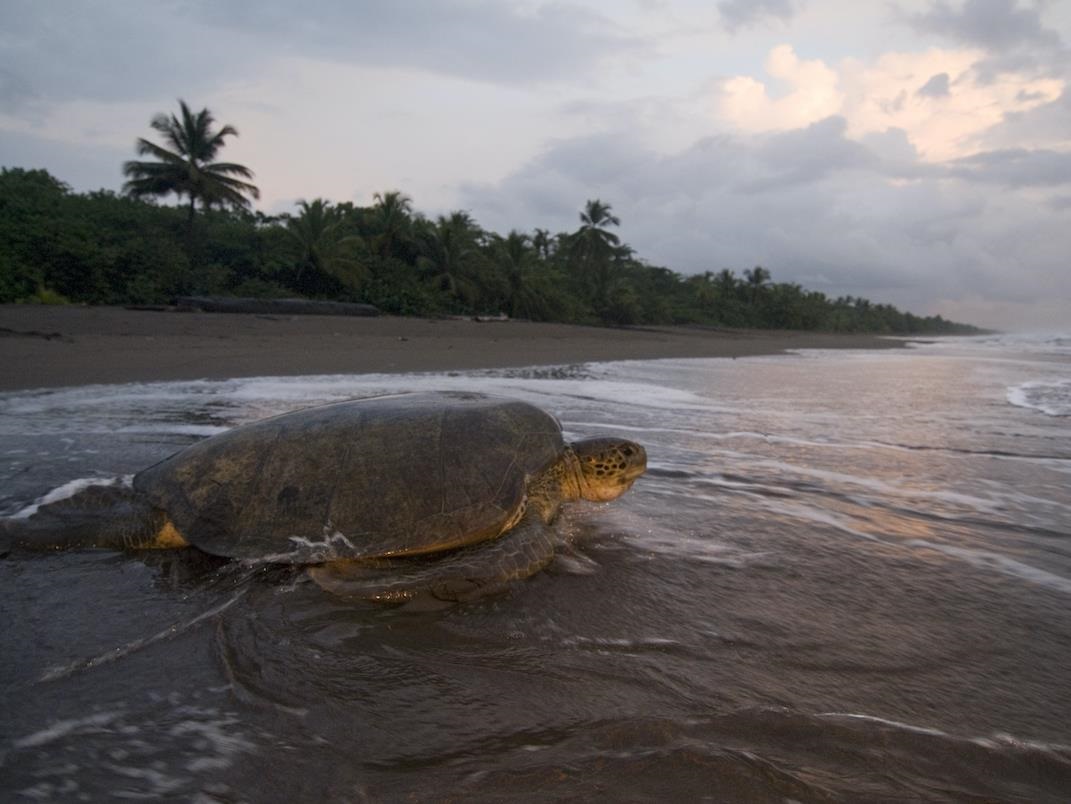 By using the earth's magnetic fields, female turtles can relocate their birthplace and navigate back to the area when they nest.
Neil Osborne

Although sea turtles have survived for 100 million years, six of the seven species are currently threatened or endangered

Each year, millions of female turtles head to the coastline to lay eggs. Their nesting season starts in March and lasts through October. Populations of loggerheads, leatherbacks, and Kemp's ridleys will head to the shores of Southeast US, while other groups of green sea turtles and leatherbacks will swim hundreds of miles to lay eggs in places like Costa Rica and Gabon.

On these shores, turtles are met with challenges. They might face boat collisions in the shallow water, poachers on land, or disorienting artificial lights.

Depending on a turtle's nesting location, the set of challenges vary. For some nesting and hatching populations, empty beaches may be helpful. Take Florida for instance, where boat collisions are one of the leading causes of mortality for sea turtles.

The coronavirus has largely eliminated that obstacle. "Many of the marinas are closed. Many of the public boat launches are closed," Godfrey said. "So there are few fewer people cruising around our coastline in boats."

But even if a turtle makes it to the shore, it could still get deterred by beach debris - whether that's beach chairs, sandcastles, or trash.

If the female turtle successfully lays eggs, the eggs will hatch a couple of months later.

"They all tend to sort of bubble out of the nest, and they immediately are trying to find their way to the water," Godfrey explained. Debris and bright lights can cause them to head in the wrong direction, where they could be caught by predators or become dehydrated. It's estimated that only one sea turtle in 1,000 will make it to adulthood. Now that beaches are closed, restaurants have shuttered, and hotels sit empty, the female turtles have a better chance of making it to shore and successfully laying eggs. As turtles begin to hatch in lockdown, the babies will also have an easier time finding their way to the ocean.

"Purely from a biological standpoint, I expect that there will be less hatching disorientation. I suspect there will be fewer boat collisions. I expect that fewer adult female turtles will be disturbed and caused to go back to the water," Godfrey said. "From a biological standpoint, we're talking about Florida, I think you're going to see those benefits."

At Juno Beach in Florida, researchers have recorded an increased number of loggerhead and leatherback turtle nests than the year before

Just two months into the typical nesting season, the Loggerhead Marinelife Center has already counted 676 nests on its nine and a half miles of beach. At this time last year, the research team had marked 494 nests.

But Justin Perrault, the director of research at the Loggerhead Marinelife Center, said there's no indication the increase is due to coronavirus.

"We are actually above our record year for loggerheads right now," Perrault told Insider. "That doesn't mean anything at the moment. They could start early and end early." Nesting rates vary from year to year as female turtles only nest every few years. The organisation expects to have between 10,000 and 15,000 nests, which it's on track for.

Perrault also noted that the leatherbacks started nesting in February, which is earlier than usual and before stay-at-home orders had been placed in south Florida.

"We don't know the impacts of coronavirus and beach closures on sea turtles in Florida yet," Perrault said.

Empty beaches have created another problem in some regions: the potential for increased poaching

Many coastal communities have long histories of turtle poaching. According to WWF, tens of thousands of sea turtles and their eggs are lost to unsustainable harvesting each year. Turtle meat and eggs have been used as a source for food, income, and medicine across the world for thousands of years.

But as sea turtle populations declined, groups formed to support both the turtles and coastal communities.

Godfrey and his team at the Sea Turtle Conservancy work directly with communities to reduce turtle poaching. One successful strategy is by providing ecotourism opportunities. A sea turtle sits on an empty beach in Panama.
Sea Turtle Conservancy

"In more developing countries, like Costa Rica and Panama for example, we work with coastal communities essentially to eliminate the unsustainable harvesting of turtles and their eggs and replace it with the sustainable use of turtles as an ecotourism driver," Godfrey said.

The coronavirus lockdowns have put tourism on hold, and businesses now face a lack of business. That, paired with an escalated need for food and income, may lead to an increase in poaching.

"All the people that make their living off those tourists are getting more desperate," Godfrey said. "Those forces are going to cause people to go out and get food for their family off the beach." Sea turtles can be found in oceans and on shores all around the world. This green sea turtle was spotted in the Red Sea off the coast of Egypt.
Alexis Rosenfeld/Getty Images

In Tortuguero, Costa Rica, Godfrey has heard from his team "that there's less patrolling by park guards taking place, and they are seeing evidence of increased poaching."

"The direct human consumption threat is the problem there, and that's only going to get worse because of the virus," Godfrey said. "There's nothing about the virus that will make that better."

Before lockdowns, volunteer groups would walk the beaches, tourists would be present, and residents could go on beach walks. Their presence was often enough to deter poachers. With these groups staying home, people have an easier time stealing turtle eggs.

Mast, who works with turtle conservationists on a global scale, said the pandemic has caused challenges in regulating fisheries. While there might be fewer fishermen on the water, which could lead to fewer accidental turtles caught, there are fewer people on the water to enforce regulations.

"I think it's not only important to continue to enforce," Mast said. "But I think it's important to take this moment to engage the public in understanding why we enforce. Why it is we protect these resources, not just turtles, but everything."

Are new nests a result of coronavirus?

In a few locations around the world, there has been new or increased sea turtle nesting attributed to empty beaches.

On one of Thailand's popular tourist islands, Phuket, leatherbacks are nesting for the first time in five years, according to Reuters.

Across the beaches, 11 leatherback nests have been spotted, the highest number in the past 20 years.

Although these new nests have been associated with quiet beaches during Thailand's lockdown, according to Aorn Sillapasathitwong, foundation manager at the Mai Khao Marine Turtle Foundation in Thailand, the nesting happened before Thailand's lockdown went into effect.

"There is no sea turtle rebounding during COVID-19 in Thailand," he told Insider in an email. "If we consider the timeline, the returning of the leatherback is not related to the lockdown."

In India, an estimated 60 million eggs were laid on the eastern coast this year and linked to lockdowns, according to Sea Voice News.

Where a sea turtle decides to nest is coded in its DNA, explained Godfrey. By using the earth's magnetic fields, female turtles can relocate their birthplace and navigate back to the area each year they nest. While it's an exciting discovery, a single sea turtle can nest anywhere from two t0 11 times each season, meaning that it could be as few as two turtles who nested on the beaches in Thailand.

That's still promising. Those beaches may have previously been inaccessible to turtles due to fisheries in the water or tourists on the land.

"We don't want to fool ourselves into believing that a spike portends some sort of recovery of the species," Mast said. "It takes more than a spike to indicate that something like that is happening. But it offers us an opportunity to really stop and reflect on, not just as the status turtles, but the status of nature in general." Experts doubt empty beaches will have any lasting impact

While the prospect of lockdown has people questioning the benefits and disadvantages it will likely have on turtle populations, the experts that Insider spoke to agreed that one season won't have long-term impacts on sea turtles unless it leads to changes in human action.

"If we do find these positive impacts of beach closures on the sea turtles, maybe there will be some increased management," Perrault said of Juno Beach.

Godfrey agreed. One good or bad season won't make or break sea turtle populations, but he does hope that data might.

The data collected during this time could be used to persuade people to protect these animals and change their behaviours.

"If we can take lessons learned from this year about positive things that have happened to these animals and say, 'Look, you know all those things we've been asking you guys to do the last couple of decades? It actually works. That's the only silver lining I see coming out of this for turtles," he said.