1. The rand is under pressure again, trading at R14.80/$ this morning amid emerging market jitters. The trade war is a degree hotter after the Chinese government stepped up its rhetoric.

2. The South Gauteng High Court in Johannesburg instructed the EFF to pay Trevor Manuel R500,000 for "defamatory and false" comments.

The EFF accused him of nepotism in the process that led to the appointment of the new head of SARS, Edward Kieswetter. The EFF will appeal.

We have instructed our attorneys to appeal; not even courts should be allowed to silence the truth also if that truth is against the Thuma Mina group of the ruling elite.

3. Former president of the Black Business Council Danisa Baloyi and three co-accused appeared in a Johannesburg court yesterday on charges of fraud and theft.

Baloyi is facing allegations that she funnelled a R5m donation to the council, from Airports Company South Africa, into other bank accounts.

The former Black Business Council president Danisa Baloyi is out on R5000 bail along with 3 other co-accused. The four handed themselves to the Hawks on Wednesday over the missing R5 million donation to BBC by ACSA. They're due back in court on July 3. pic.twitter.com/Lmrp66qYPd

5. The debt-laden fertiliser company Omnia Holdings said on Thursday it will issue new shares worth R2 billion to raise money.

Omnia to sort out its debt via a right issue. Of R2bn. The Group's market cap is only R3.6bn. Ouch.

So on April 23rd $JSEOMN Omnia said clearly "no need for recapitalisation"....the share runs +8% on relief

Today, May 30th.....oops we misled you...we actually need R2bn AND we ain't telling you what price it is

1. Someone from board needs to be fired
2. Ditto Sponsors pic.twitter.com/kiLvyIB6Nt

About 5,000 people have reached the summit of Mount Everest since Sir Edmund Hillary and Tenzing Norgay first made it to the top in 1953. About 306 people have died climbing the mountain, 11 in the past week alone.

Everest's peak sits almost 9km above sea level. To get to the summit, climbers must brave the "death zone," the area more than 8,600m up, where the body cannot get enough oxygen.

But the experience of climbing Everest is probably a bit different than you'd imagine.

Mountaineers pay tens of thousands of dollars for a chance to go to the top, and they spend months at Base Camp, making little climbs up the mountain to acclimatize to the low oxygen levels.

The recent deaths have been attributed to overcrowding on the mountain, since people were forced to wait in line for hours in the death zone for a chance to ascend and descend from the summit. But Everest actually has more than one route up, and the mountain is far from the most dangerous Himalayan peak.

Here are 16 misconceptions about the experience of climbing the world's highest mountain.

Climbing Everest isn't cheap. People who attempt to summit spend up to R900,000 to hire Sherpa teams to carry loads up the mountain, pay for food and climbing gear, and buy the required permits to stay at Base Camp and climb the mountain.

Several companies charge customers around R900,000 for a chance to climb, which covers the cost of climbing guides, Sherpa teams, and food.

One company, Seven Summit Treks, charges  R1.7 million per person for a "VVIP" Mount Everest package that includes a welcome dinner, a stay in a five-star Kathmandu hotel, a personal photographer, all meals, unlimited tea and coffee, and private helicopter service. At base camp, these climbers get a private bakery, bar, heated kitchen, shower, and toilet tents. The package doesn't include flights, required gear, or tips for the crew.

But most climbers can get away with spending far less the only fixed cost is the R157,000 permit fee paid to Nepal's government for the right to climb.

Attempting to Everest comes with myriad health risks. The mountain's fatality rate was about 4% as of 2012.

That's just one-eighth as risky as trying to summit the nearby Annapurna. 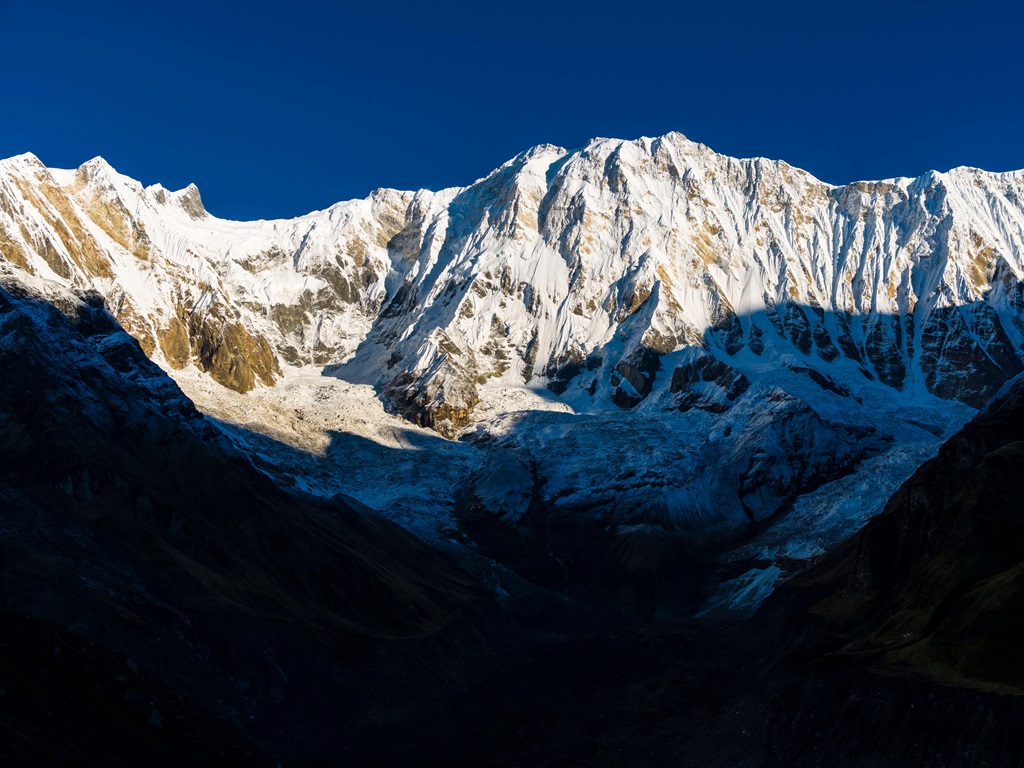 According to NASA's Earth Observatory, Annapurna I - the 10th tallest mountain in the world - has a fatality rate of 32%.

Before attempting to reach the summit, climbers typically spend one to two months at Everest Base Camp, which is higher than nearly every mountain in Europe at 5,300m. They make multiple trips up and down the mountain to acclimatize.

If climbers don't give their bodies enough time to acclimate to the lung-crushing conditions in the Himalayas before attempting to summit, they could experience swelling in their brain and lungs.

Expeditions generally make at least three trips up the mountain from Base Camp, going a few thousand meter higher with each successive trip before making a push for the top.

One woman, however, recently completed her entire Everest journey - including the flight from California to Nepal, the 65km trek from the airport to Base Camp, and her climb up the mountain - in just two weeks, the Washington Post reported.

To get to Everest's Base Camp, climbers have to fly from Kathmandu to the tiny airport of Lukla, then trek 65km.

This trek often takes two weeks, giving climbers time to acclimatize to the high altitudes of the Himalayas. People often pass through Namche Bazaar, a mountain village, to stock up on supplies.

Climbers can't scale Everest at any time of the year. Typically May is the only month when the weather is good enough to reach the summit.

Good weather conditions - free of extreme snow, rain, and windstorms - are rare on Everest. An impending "weather window" often prompts a crowded scramble to the summit.

Short windows of good weather can cause traffic jams and overcrowding on the mountain route. Last week, 11 people died waiting to ascend and descend the peak during this season's good-weather window.

Not everyone who wants to climb Everest in a given year can do so. Nepal only issues a set number of permits per year. A record 381 people were granted permits to climb Everest in 2019, and the recent deaths have given rise to new scrutiny of the permitting policies, according to The Washington Post. But overcrowding on the summit has been a consistent issue on Everest, since parts of the route necessitate single-file climbing.

Typically, the north route has less traffic jams due to having fewer climbers. That route also has its own base camp, which is far less busy and built-up than its southern counterpart.

But most climbers prefer the southern route because the climbing isn't as technically challenging.

The route is mostly a long, slow, oxygen-starved ascent.

The current Everest-climbing record holder, Kami Rita Sherpa, has been up to the summit 24 times and plans to make it an even 25 next year.

One of the secrets behind Kami Rita Sherpa's success is that local Nepali and Tibetan people don't experience the same health consequences at high altitudes as most people do. That's thanks to a unique aspect of their genetic code.

When most humans reach high altitudes - where oxygen levels are lower - our bodies make more hemoglobin (the protein in red blood cells that helps carry oxygen from the lungs to the rest of the body). But too much hemoglobin can make it harder for the heart to pump blood around the body. That can lead to mountain sickness and heart attacks.

Many Tibetans don't experience this issue because their bodies don't make that extra hemoglobin. Instead, their DNA contains a gene called EPAS1, which prevents that blood-thickening process. That gene, it turns out, comes from our human ancestor cousins, the Denisovans.

In order to combat the lack of oxygen at Everest's high altitudes, many climbers use supplementary oxygen, which they carry in tanks on their backs. But not all mountaineers use supplementary "O" to climb. Some record-breakers make it to the top without supplementary oxygen. The first people to achieve that feat were Reinhold Messner and Peter Habeler on May 8, 1978.

Ropes up the mountain aren't in place year-round, so the first climbers to reach those heights have the job of anchoring the equipment and setting up the path for themselves and the climbers behind them.

Mountaineer Shaunna Burke and her Sherpa team were the first to summit during the 2005 climbing season.

That meant Burke's team had to break the trail up - setting ropes, lines, and routes for themselves and the climbers behind them. "It meant we were moving so slowly that our hands and feet start to freeze," she said.

Everest's southern route has designated sites where climbers are allowed to make camp. They can't just pitch a tent anywhere.

Climbers leave from Base Camp at 5,800m, then trek through the Khumbu Icefall up to Camp 1 at about 6,500m. Then they pass through the area known as the Western CWM to get to Camp 2, around 7,000m up.

The summit is 762 meter above Camp 4. Summiting takes a single, almost 24-hour, day of climbing from the edge of the "death zone." Typically, climbers attempting to reach the summit try to make it up and down in a single day, spending as little time as possible in the death zone.

Burke's summit attempt began around 11 p.m. at Camp 4, as she and her Sherpa team started ascending in total darkness.

"You almost felt like you could touch the sky," Burke told Business Insider. "It was a cloudless night, the stars were so bright, and all you could hear was breathing sound and see the headlamps of climbers in a line going up the mountain."

While the summit push may be the hardest day on the mountain, it's far from the scariest part of the route. Most people agree that's the Khumbu Icefall.

The Khumbu Icefall consists of layers of gigantic ice blocks that are constantly shifting, creating massive crevasses between them. Climbers use metal ladders to span these cracks.

Because the Icefall is located between Base Camp and Camp 1, climbers must pass through it every time they complete an acclimatization trip.

According to Burke, as temperatures warm, the Icefall becomes more unstable.

Between 1953 and 2016, there were 44 deaths in the Icefall - roughly 25% of the total deaths on the south side of the mountain during that time period. Climbers perished after falling into crevasses, having sections of the Icefall melt and collapse around them, or being smothered by avalanches.

In total, 306 people have died trying to summit Everest. Most of those dead bodies remain frozen on the mountain, since it's a dangerous and life-threatening task to retrieve them.

Most bodies are left on the mountain because removing them can cost a lot of money (in some cases, around R1 million). The effort has proven fatal in the past: in 1984, two Nepalese climbers died trying to recover a body.

Lhakpa Sherpa, who is the women's record-holder for most Everest summits, previously told Business Insider that she saw seven dead bodies on her way to the top of the mountain in 2018.

"Only near the top," she said, noting that one man's body "looked alive because the wind was blowing his hair."