The stop-gap law on land rights in former homelands was due to expire in 1997. It was just renewed again. 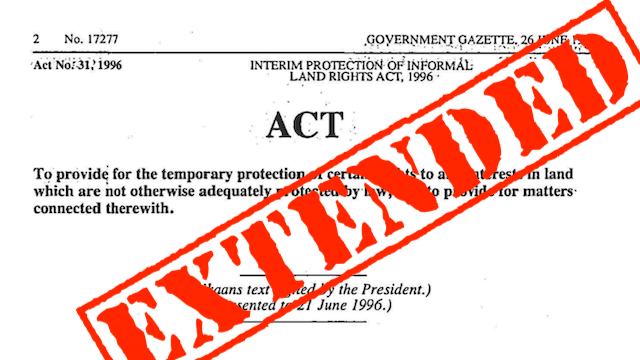 In June 1996 then President Nelson Mandela signed a piece of legislation dealing with one of the thornier issues in South Africa: the right to land in the former homelands such as Transkei and Bophuthatswana.

Despite all the complications involved, that law ran to just three pages, if you count its ornate but content-free first page, because it was a hastily crated stop-gap, literally intended to buy just a few months of breathing room.

But on Friday the Interim Protection of Informal Land Rights Act was extended for another year before it could expire at the end of December, at which point it would already have been 22 years overdue for retirement.

The notice that creates that extension, buried in the middle of a 200-page Government Gazette, is perfunctory and by now routine, but illustrates how long South Africa has failed to come up with a comprehensive solution to land reform – even before new controversy around expropriation without compensation and the fate of land held by the Ingonyama Trust.

The "interim" law was intended to make sure people were not kicked off land to which they had a clear claim, but without paperwork to prove that.

It provided protection specifically for those in the former homelands, or with informal rights by way of custom or indigenous law and, just in case, added in anyone who had held "beneficial occupation" of land from at least 1992 without the consent of the formal owner.

In such cases nobody, including the state, can "deprive" those informal owners of their land outside of formal expropriation mechanisms. That includes traditional leaders, who even if they otherwise have the right to sell land, must convince a majority of those who live on it to consent to such a sale.

It was a messy bit of law, but with a specific sunset clause of December 1997.

See also: Here is how expropriation – with or without compensation – would work under the new Expropriation Bill

Perhaps realising that land would not be quite such an easy matter to resolve, legislators built in an extension clause, which would allow one extra 12-month extension, to December 1998.

But before that expired the Interim Act was amended so that the single 12-month extension could be repeated indefinitely – as it has been every year since, and again this week.

Related Links
The SA government is ready to transfer more than 100 plots of state-owned land in restitution...
Why Cyril Ramaphosa’s land reform panel loves individual ownership of farms – and thinks...
Here is how expropriation – with or without compensation – would work under the new Expropriation...
Next on Business Insider
15,300 UK KPMG staff could lose part of their bonuses if they don't attend unconscious bias training