The world's skinniest skyscraper is almost complete. Take a look inside A bevy of super-tall, glossy skyscrapers are rising along New York City's Billionaires' Row, an area south of Central Park that's home to some of the most expensive real estate in the city.

There's Central Park Tower, which recently became the tallest residential building in the world. Then there's 220 Central Park South, which broke real-estate records last year when the billionaire hedge fund manager Ken Griffin paid R4.1 billion for a spread of condos. Both towers are expected to be finished in 2020.

Now nearing completion is 111 West 57th Street, which has the distinction of being the world's most slender skyscraper. The 435 metre tower is 24 times as tall as it is wide and has only one residence on each floor.

The skinny skyscraper, which was developed by JDS Development Group, Property Markets Group, and Spruce Capital Partners, is expected to welcome its first residents later this year.

Take a look inside the first finished condo in the world's most slender skyscraper.

Steinway Tower, a super-tall tower at 111 West 57th Street in New York City, is the most slender tower in the world, according to the developers. According to New York's Skyscraper Museum, a tower's slenderness is based on the width of the base compared with the height of the building.

"A tower can be very tall, but not slender, and it can be slender without being very tall," the museum's website says.

On a gloomy October morning in 2019, I took the train uptown to Steinway Tower. The 91-story skyscraper is in an area called Billionaires' Row, home to some of the city's most expensive real estate. Billionaire buyers like Ken Griffin, Michael Dell, and Liu Yiqian have picked up multimillion-dollar condos in the glossy towers rising in the neighborhood.

111 West 57th Street sits adjacent to the historic Steinway Hall, which was built by the piano company Steinway & Sons and opened in 1925.

While building the luxury skyscraper atop Steinway Hall, developers have also done a thorough restoration of the interior and exterior of the historic building.

The building was still a construction site, with scaffolding hiding most of the bottom of the tower from view. The tower is expected to be completed in 2020, but the developers held a special press event for a peek at the first finished condo in the building.

I stepped into the Steinway Hall rotunda, which was once part of the famed piano company's showroom. A pianist was playing pieces by composers like Chopin, Brahms, and Rachmaninoff — on a Steinway, of course — next to a glowing model of the building. After some introductory remarks, coffee, and tiny quiches, we went up the elevators in small groups to the 43rd floor.

The first finished condo in Steinway Tower is a three-bedroom unit on the 43rd floor — about halfway up the building — with its own private elevator entrance. While it's not currently for sale, a three-bedroom of about the same size on the 42nd floor is listed for R500 million.

The condo has about 418 square metres of living space. The open kitchen flows seamlessly into the living area. 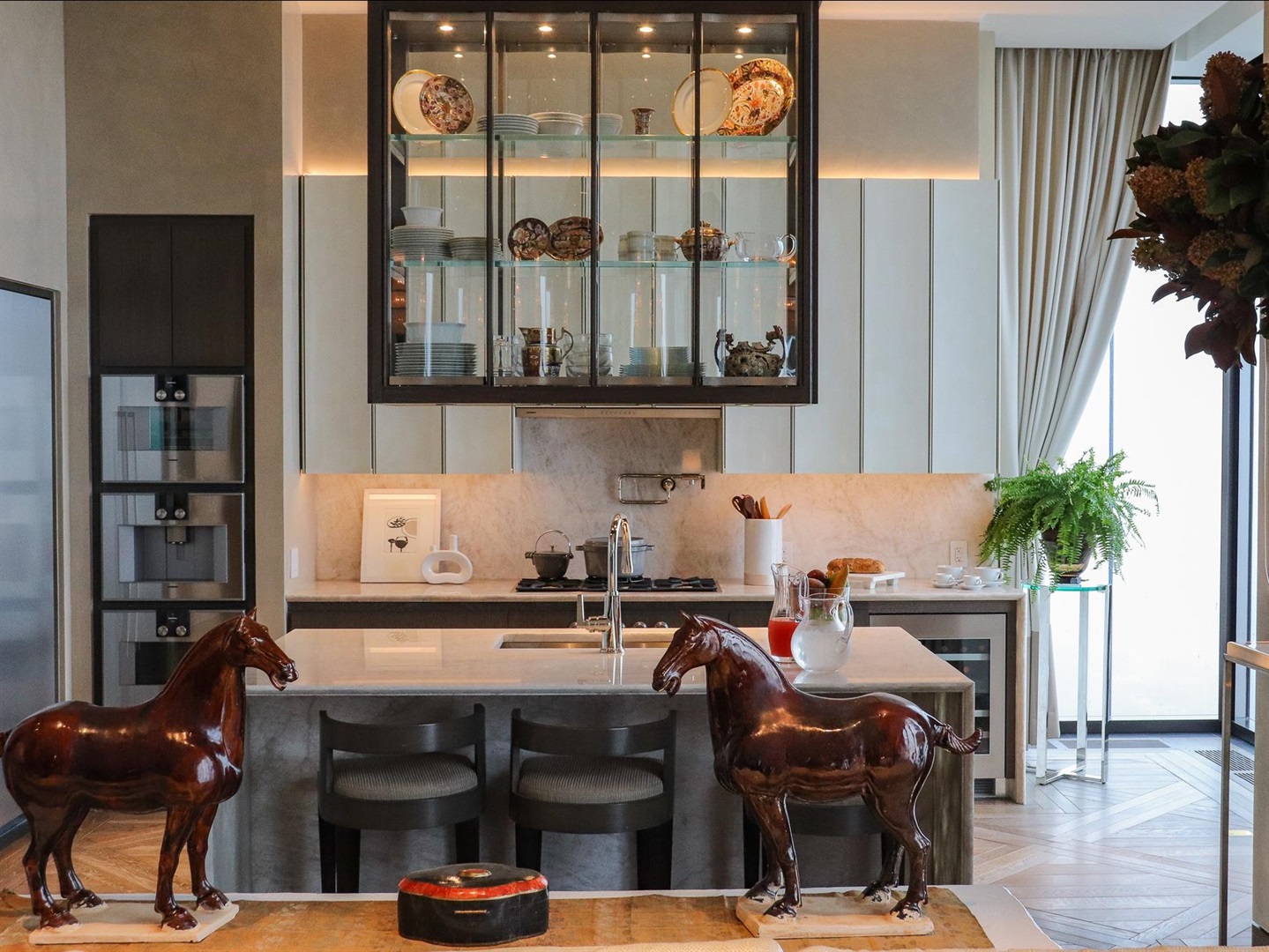 Although I wasn't able to get a photo of the living area without people in it, this is what the view of Central Park would look like on a sunny day. Thanks to its location almost directly at the center of the park's southern border, 111 West 57th Street has symmetrical views of NYC's most famous park.

The condo's great room is more than 15 metres long.

During my visit, the view looked more like this. It was drizzly and foggy, and on the 43rd floor, we were basically in the clouds.

The dining area, which can comfortably fit 10 people, sits on the opposite end of the great room from the kitchen. A door off the dining area opens up to a full wet bar. The condo has three bedrooms, one of which was set up as a study. Each bedroom has an en suite bathroom and there's an additional powder room. The interior design was done by New York-based Studio Sofield. Each bedroom has floor-to-ceiling windows. 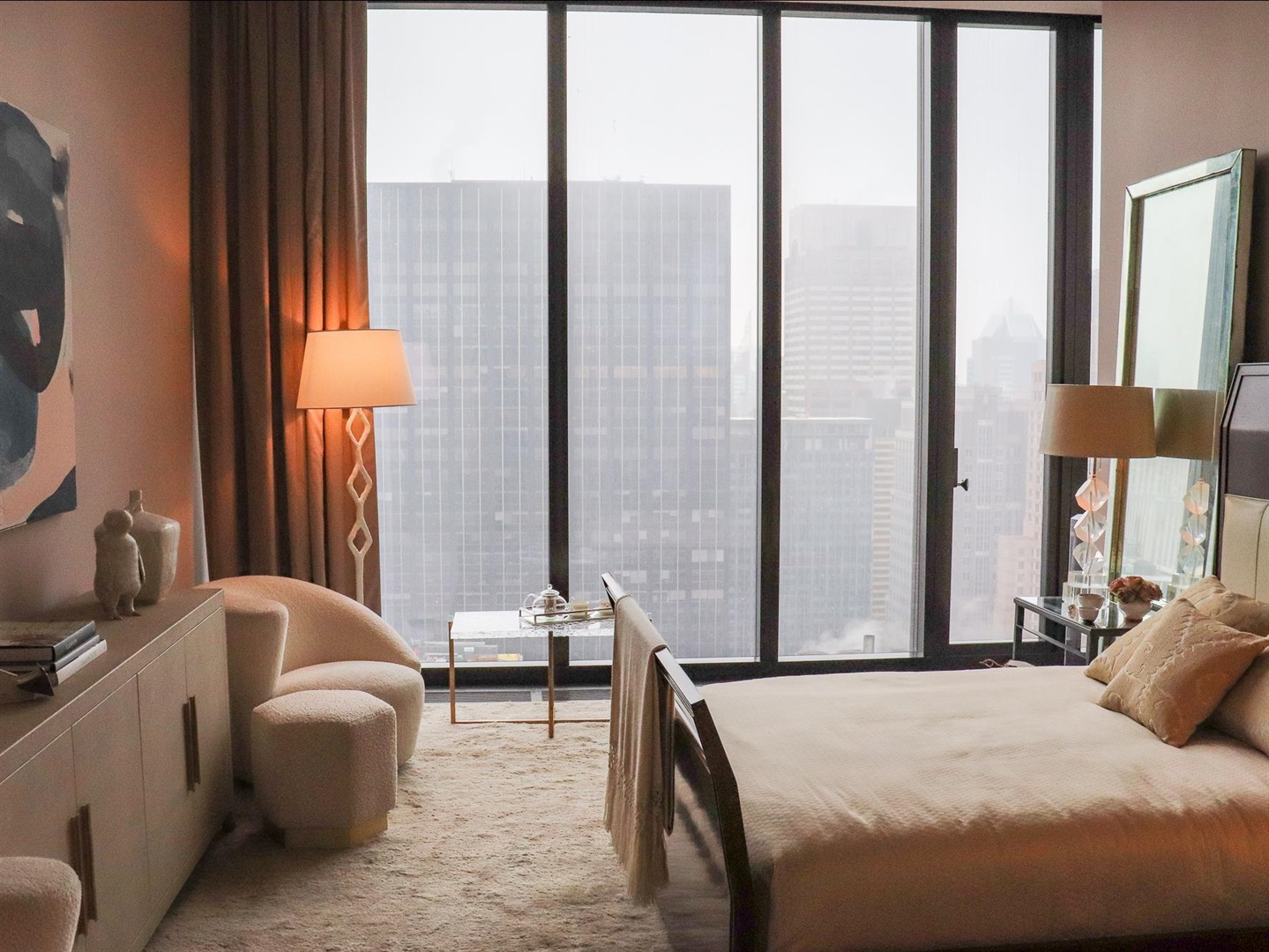 A dressing hall leads toward the master suite. To the right is a walk-in dressing room ... ... and across from that is the marble-clad master bathroom, which features dual vanities and a walk-in rain shower. A glossy, freestanding soaking tub is the focal point of the glamorous bathroom. 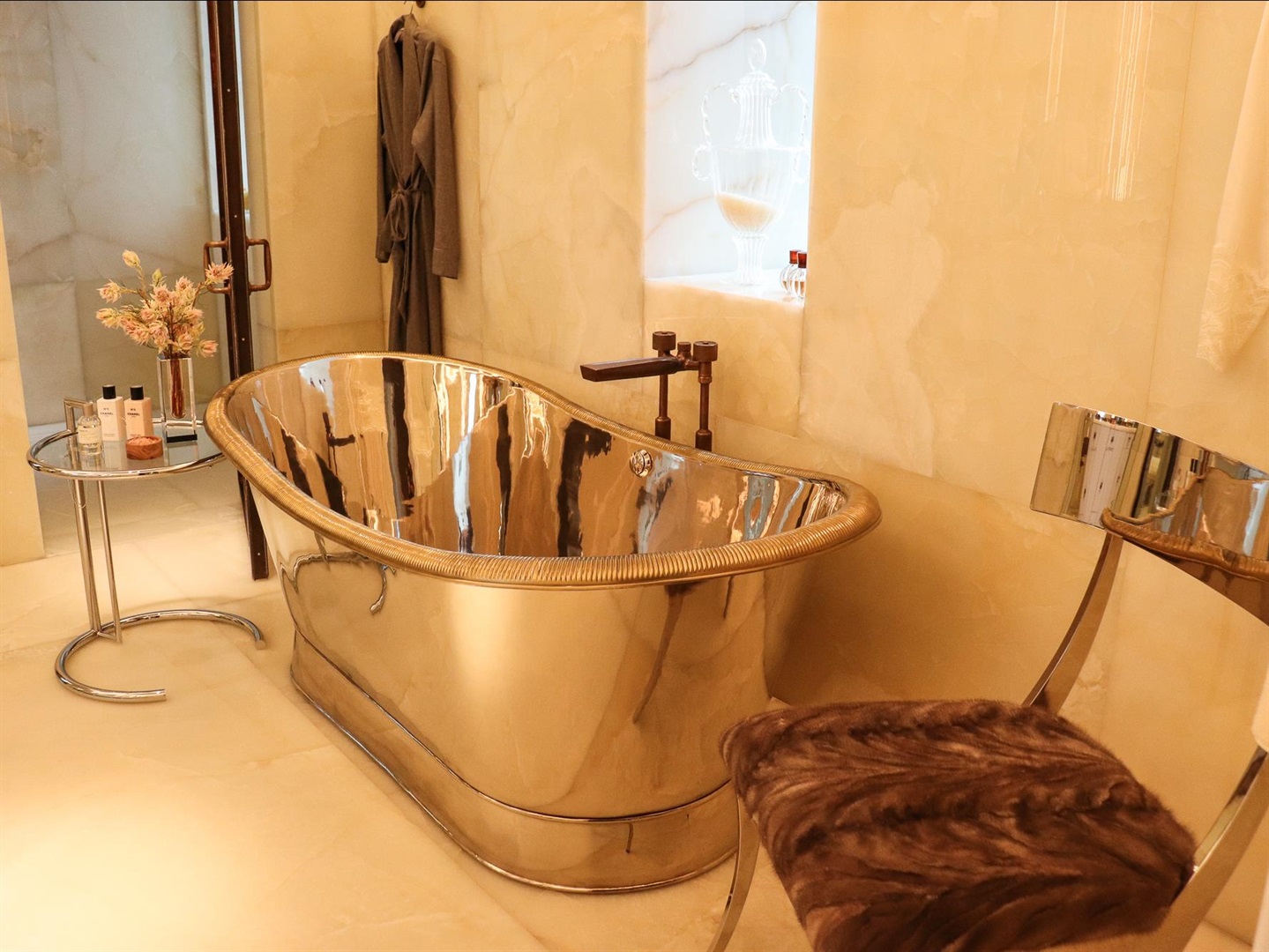 The master bedroom sits in the southeast corner of the building. When it's finished, Steinway Tower will offer residents amenities that include a 24-hour doorman and concierge, a 25 metre swimming pool, and an expansive shared outdoor terrace.

The architect of 111 West 57th Street describes it as the "quintessential" New York City building, but I'm not sure I agree with that characterisation. Gregg Pasquarelli, founder of SHoP Architects, which designed the building, said at the press preview that their goal was to create a building that was "uniquely New York and absolutely modern and forward-thinking, but has the DNA of the New York skyscraper embedded in it."

"It's the quintessential tower designed and built by New Yorkers," Pasquarelli said.

The tower's terracotta and bronze exterior does differentiate it from the sleek glassy surfaces of the other new skyscrapers on Billionaires' Row.

But while the skyscraper's facade and super-tall, super-skinny silhouette are certainly unusual, I can't say that my tour of its first condo felt too different from another Billionaires' Row apartment I've visited.

Earlier last year, I toured a full-floor residence at nearby 157 West 57th Street that was listed for R1 billion and found that the standout feature was the view of the park. Steinway Tower has basically the same draw, only slightly more symmetrical - a fact the developers made sure to emphasize during the press event.

Pasquarelli says the building is "uniquely New York." As a New Yorker, I have to say I'd rather live closer to the ground in a diverse neighborhood than 300 metres high in the clouds in Midtown, surrounded by the absent millionaires and billionaires that make up so many of the buyers on Billionaires' Row.