At 4% in February, inflation just dropped to its lowest point in almost three years as the rand claws free of paralysis South African headline inflation, which takes into account food and energy prices, dropped 40 basis points to 4% in February, making it the lowest rate since March 2015. 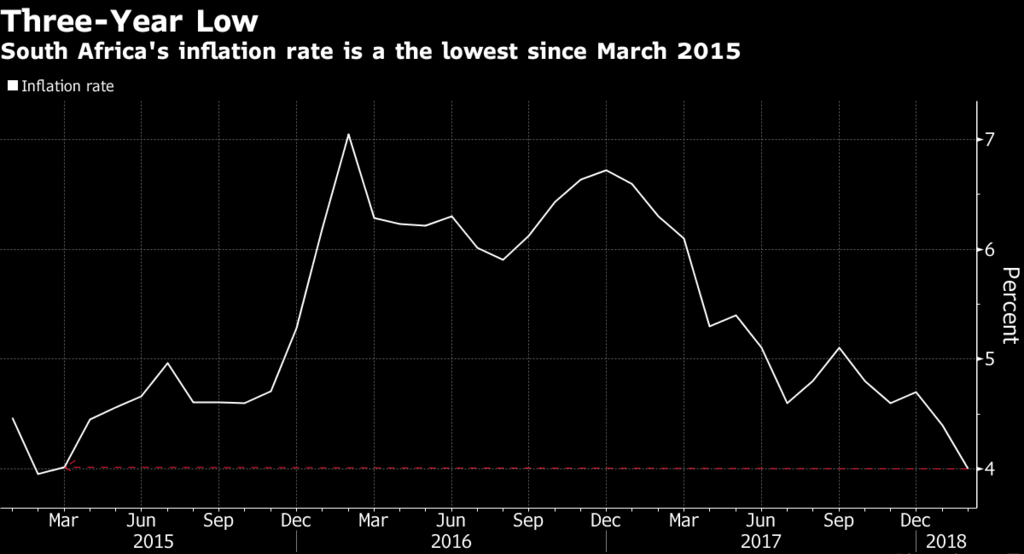 Market expectations were for a 20 basis points decrease, according to PwC economist Maura Feddersen. Instead, inflation came in 40 basis points lower.

"There are two key drivers behind the decrease, the most important one is that we have been benefiting from the stronger exchange rate which has been translating into lower fuel prices in South Africa. Fuel prices are down almost 2% between January and February 2018," says Feddersen.

The South African Reserve Bank (Sarb) sets policy to achieve and maintain inflation of between 4% and 6%.

Moneyweb reported that 15 out of 22 economists concurred that the central bank could possibly announce a 25 basis point cut in interest rates next week, bringing the repo rate down to 6.50%, in an attempt to boost a feeble economy that has begun to recover from political paralysis.

Feddersen hopes that the good news of the CPI rate will influence the interest rate decision.

She tells Business Insider South Africa that the second driver behind the astonishing drop is that food prices are continuing to soften too, especially bread and cereal, down 5.1%. Meat prices are however, a bit of a counteracting factor with an 11% increase year-on-year, as farmers restock their herds in recovery from the drought.