Clusters of glass slabs scattered across the top of a small mound at the Puquio de Nuñez site in northern Chile.
Schultz et al., Geology, 2021

At first glance, the Atacama Desert in northern Chile looks like a forgotten wasteland. It's one of the driest places on Earth, with a climate so arid that few animal species can survive. Humans are scarce, too - the area is peppered with ghost towns. And one swath of the desert is brimming with clues about a disaster that may have occurred roughly 12,000 years ago.

About a decade ago, scientists detected scattered plots of black and green glass along a 75-kilometre corridor. Their origin was mysterious, but some researchers surmised that a fire had melted the soil, fusing and hardening the minerals.

Peter Schultz, a professor of geological sciences at Brown University, wasn't convinced by that theory when he visited the site in 2018. In addition to being scorched, the glass was twisted, folded, and sheared.

"These samples look like somebody was out there - some sort of cosmic God - simply folding over glasses to make some bread," Schultz told Insider. "It was one of those things that made my hair stand on end."

In a study published this week in the journal Geology, Schultz and his research team determined that an exploding comet or comet-like object fused the soil, leading to the formation of giant glass chunks. The researchers estimated that the explosion took place roughly 11,500 to 12,300 years ago, around the time when hunter-gatherers inhabited the region and large animals, or megafauna, disappeared from South America.

Schultz said his team is now investigating whether there's a correlation between the animals' disappearance and the ancient explosion.

"We have the evidence," he said. "We don't have the smoking gun." The researchers behind the study said they found "innumerable patches" of folded, twisted glass. Schultz estimated that each patch is nearly 3 kilometres long and 0.6 miles wide (3 by 1 kilometres). The chunks of glass are also large: up to 50 centimeters across.

"Our truck got caught and we had to use slabs of glass just to get us out," Schultz said. "That's how much glass there is - we put it under the wheels of the tire so we could get our truck out."

Based on the size of the patches, he added, the explosion was probably capable of widespread destruction.

"We can just imagine this thing coming down," Schultz said. "I think we would have seen multiple small bodies, comets, coming in. Then they hit in different locations all about the same time, within minutes."

Schultz thinks the explosion took place within a mile of Earth, but never struck its surface, which is why it didn't form a crater. Instead, it probably ushered in enough extreme heat to melt the soil, he said, plus a tornado of heavy winds - likely above 160 kilometres per hour. Schultz compared the pressure to holding a watering hose to the ground. High winds would have lifted the glass, kicked it around, and folded it over several times.

It's unclear whether the explosion wiped out any large animals, but the researchers wagered that hunter-gatherers who settled in the high plains would have borne witness to the disaster.

"If this had occurred in an overpopulated area, I think there would have been tens of thousands of deaths," Schultz said. "It makes Chelyabinsk look like a runny nose and Tunguska like a sneeze," he added, referring to two meteor blasts, in 2013 and 1908, respectively. The blasts released significantly more energy than the bomb dropped on Hiroshima. 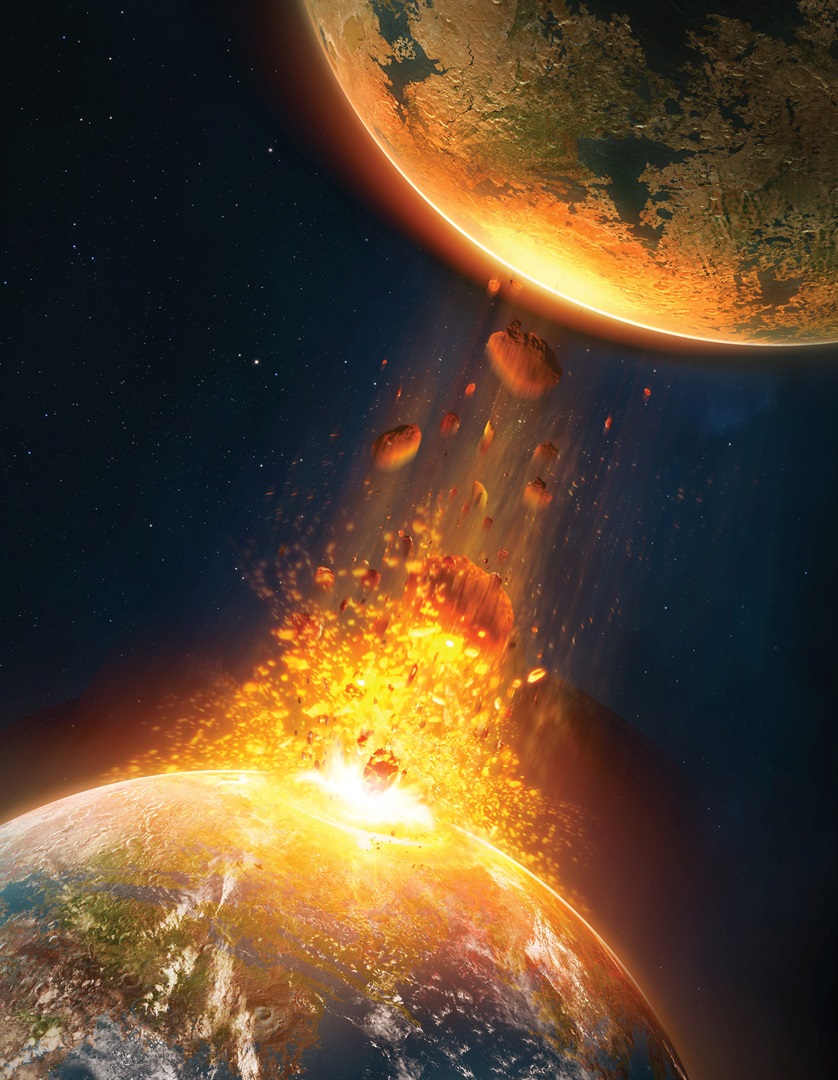 An illustration of an object, such as a comet or asteroid, colliding with the Earth and ejecting debris beyond the Earth's atmosphere toward Venus.
Tobias Roetsch/Future Publishing/Getty Images

Schultz said his team is confident that an explosion formed the glass patches in the Atacama Desert. A regular fire couldn't have warped the soil to that extent, or on such a massive scale, he said.

His study also showed that minerals in the glass were exposed to much higher temperatures than fire can reach. After examining the glass under a microscope, his team found evidence of decomposed gems called zircons.

The glass also contained minerals commonly associated with meteorites, such as the samples brought back from a comet during the 2006 NASA Stardust mission.

"We found material in there that looked just like the stuff from the Stardust mission," Schultz said.