By its nature, the Seattle-based dominatrix's work has pretty dark themes. But in the current pandemic, a portion of her clients' requests are now explicitly related to Covid-19, she told Insider.

Rage spoke to Insider about the kinds of requests she's had since the pandemic started.

Time to call the 'CDC inspector' Rage's version of a CDC officer wears a full rubber cat suit with a gas mask, and sets about determining whether her client is "infected."

"They must be, you know, completely inspected medically up and down," she explained. "They're often found to be infected, and therefore must be tortured for being in society."

Scenes like this can take an even darker twist, she said. "A couple of people have wanted me to be their 'executioner,'" she said. "I obviously don't kill anyone, but I have a body bag and I do this whole psychodrama."

Every sensory detail of the experience is thought out. Rage sets the scene with dramatic music and red lights, and uses an aroma diffuser to spread a sharp ginger scent around the room.

"I tell them it's a poisonous gas," she said. "And I'll say: When I count down from 10, this is going to have stopped your heart. I'm the last face you're going to see.

"And then I'll say something really dirty and count from 10," she continued. After the countdown, she abruptly covers their face "so it looks like 'lights out' to them."

"And that's their scene and they love it," she said. Video work used to represent about 5% of Rage's clients, but now it's around half of her work. So for that, she has had to get creative. "It was coming up with the ideas digitally that I found really hard at first," she said.

Clients who enjoy following orders, and those who enjoy what she calls "tease and denial," can be easily dominated over video, she has found.

One client who loves to dress up and behave like a dog can be easily told to sit, beg, and eat over video. But playing "fetch" presents a little more of a barrier.

Rage explained how she will throw a ball at the screen, and the client will also throw a ball themselves and "fetch" it for her.

Those who are into bondage save Rage the bother of having to tie them up, by tying themselves up before a call. Then they're "tortured" by seeing, but being unable to touch, a distant Rage through the video screen.

Masks, but with a twist 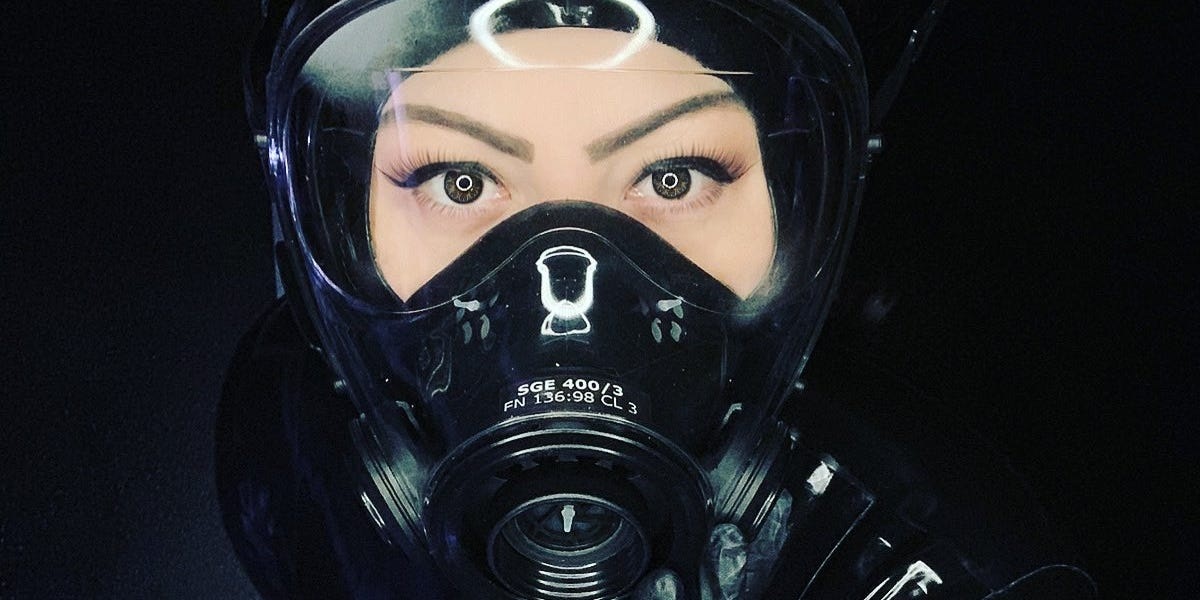 As part of her hygiene regimen when taking in-person clients, Rage asks them to wear masks on arrival.

Rage often completes her own outfit with an advanced-looking black mask with a breathing filter on, through which only her eyes can be seen. In terms of hygiene and aesthetics, it kills two birds with one stone.

"It's just normal PPE and I think it adds to the look," she said. "No one's complained so far!"