11 bugs that you can eat and what they taste like There are a fair amount of bugs that are edible.
Sean Gallup/Getty

An estimated 2 billion people eat insects as part of their traditional diet worldwide, according to a report by the United Nations. Over 1,900 different species of insects have been used for food, as noted in the same report.

Read: Fried termites - rich in protein and vitamins - are the go-to meal for many SA households, a new study shows

Known as entomophagy, the practice of eating bugs is nothing new. Now recognised as a more environmentally sustainable protein when compared to animal agriculture, insects can create a lot of nutritious food with far less waste, as noted in The Huffington Post.

But this doesn't mean grabbing a random bug from your yard and eating it raw. (This is actually a bad idea because of potential pesticides.) Most of these edible bugs are best enjoyed spiced, fried, smoked, or sauteed, like any other tasty treat. We rounded up some bugs you didn't know you could eat.

Crickets are a good beginner bug. Crickets are often the go-to edible bug for beginners because they are pretty easy to catch and rich in protein. However, they can carry parasites, so it's important to cook crickets before eating them, according to Backpacker.

Whether sauteed, baked, broiled, or fried in tempura batter, the ways to cook and serve crickets are almost endless, according to HuffPost. Many cricket chefs do recommend working with frozen bugs to make the whole process easier.

If the idea of eating a whole bug is too much, then there's also the option of cricket flour, also known as cricket powder. A complete source of protein with a mild, nutty taste, cricket powder can be mixed into baked goods, smoothies, and even salad dressings, as noted by Cricket Flours LLC. It's an easy introduction into the world of edible bugs.

Grasshoppers have made the leap to US plates. Grasshoppers are also totally edible. "In many countries that are heavy consumers of insects, like Mexico, they are wild harvested - think of the grasshoppers that are commonly eaten there called chapulines," said David George Gordon, a.k.a "The Bug Chef," in National Geographic.

It looks like they're pretty tasty, too. The toasted grasshoppers coated in chili-lime salt have become a hit ballpark concession food at Seattle Mariners games, often selling out at the concession stand, according to Sports Illustrated.

Scorpions can be less scary when cooked. When cooked, the taste of scorpion has been compared to popcorn, shrimp, or crab, as noted in Survival-Mastery. For novice bug chefs, removing the stinger and venom gland before cooking is a safe practice. Eat the bugs that try to eat your house. "I have harvested them individually or in small groups and then toasted them in a hot pan. They have a high oil content relative to the size of their body and are quite tasty, with a slightly nutty flavour," said Miles Olson, author of Unlearn, Rewild, in Mother Earth News.

Ants can be bought in bulk. 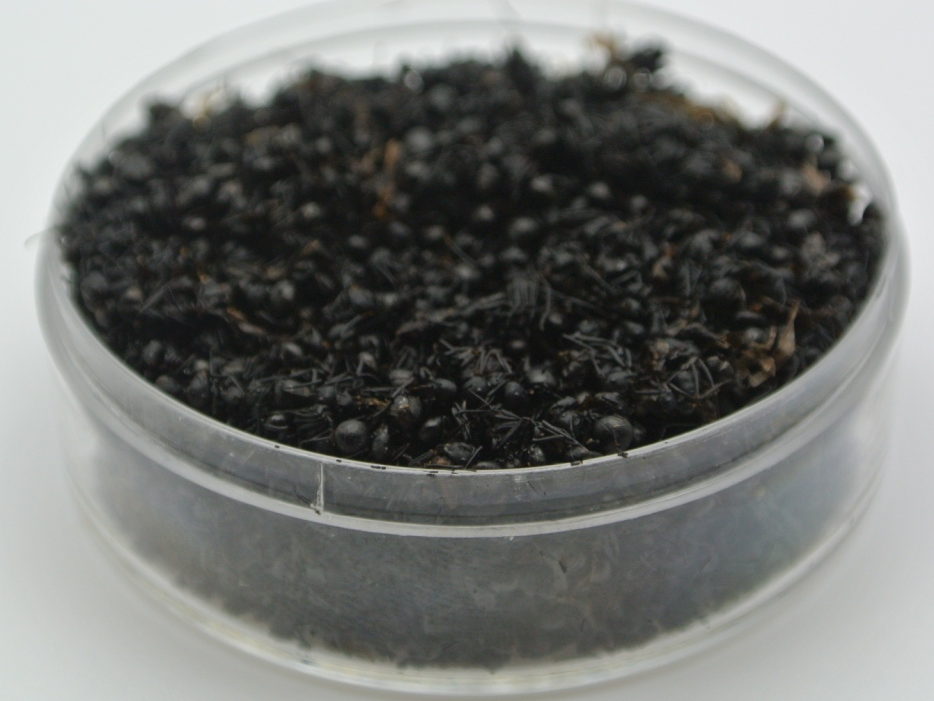 Depending on the species and cooking technique, ants can have a complex, acidic taste with a citrusy kick, according to Munchies.

Even their eggs are edible. "Ants' eggs - escamoles - are the real delicacy, and are called Mexican caviar. They taste creamy and have a wonderful soft texture," said former Masterchef winner Thomasina Miers in Slate.

Locusts can be a tasty junk food. High in protein, zinc, and iron, locusts can be pan-fried, deep-fried, or even covered in chocolate, as noted in BBC. Locusts are said to have a sort of shrimpy, nutty flavour. They were even renamed "sky prawns" during an Australian swarm, according to Bugsfeed.

Beetles can be put in tacos. The larval form of these bugs is a pretty common snack. Palm weevil, wood-boring larvae, and even mealworm are frequently eaten species, as noted in Very Well Fit. BBQ-flavoured mealworms are for sale on Amazon, and they're recommended as a taco topping.

Caterpillars can be served spicy. If you check out the street food in a city like Lusaka, Zambia's capital, dried caterpillars might be on the menu, as noted in Travel Gluttons. They can be boiled, fried, or even smoked for extra flavour. Sometimes they're served over a bed of spinach, collard greens, and hot peppers.

Wasps can be sweet. This is another bug that's apparently delicious in its larval stage. "Where you get blackberries the wasp adults will be bringing blackberries to the larvae, the larvae turn purple and if you eat those they have a distinctive fruity flavour," said Patrick Honan, manager of Live Exhibits at Melbourne Museum, in ABC Radio Melbourne. Fried dragonfly is absolutely delicious, according to fans.

"I have been cooking bugs for about 20 years now, and in that time, I think I have settled on a fried dragonfly dish I call Odonate Hors d'oeuvre as my favourite dish to make and serve," said Zack Lemann, Curator of Animal Programs at Audubon Butterfly Garden and Insectarium, in The Advertiser.

"It turns out like a lightly fried delicacy atop a slice of sautéed mushroom with a drizzle of Dijon-soy butter. They are delicious and end up tasting like soft-shell crab."

Cicadas can be cooked up to taste like popcorn. Often cooked up in garlic and salt, cicadas are said to taste like seafood, popcorn, or bacon, as noted in The New York Times.

Related Links
We blind-tasted ice-cream made from insect milk – and couldn’t believe the taste
A study of nearly half a million people found that eating certain types of food is linked to...
Bad news for people who prefer well-done meat: it's linked to an increased risk for high blood...
Next on Business Insider
Ukrainian film cast, crew launch Cannes red carpet protest against Russian invasion at own premiere