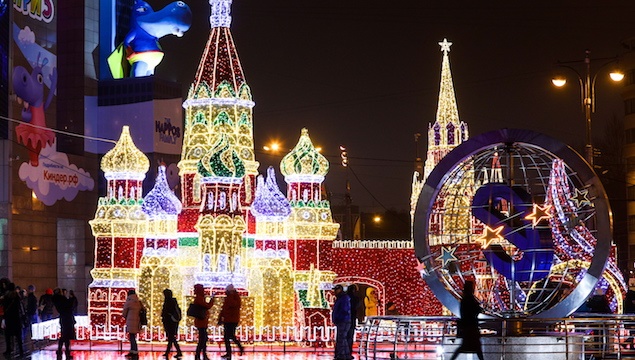 Christmas lights in Moscow, in 2017. (Getty)
British military forces reportedly practiced a cyberattack on Russia on Saturday to send Moscow into total darkness if Vladimir Putin's government attack the West.

Military sources told the UK Sunday Times that the only other way of hitting Russia back would be to use nuclear weapons.

But cyber weapons reportedly give Britain the best chance of deterring Russia because the West no longer has small battlefield nuclear weapons.

See also: NATO invited the Russians to watch its massive war games because they really want Moscow to get the message

The Sunday Times reported that the test to "turn out the lights" in Moscow – which will give Britain more time to act in the event of war – happened during the UK's biggest military exercise for a decade.

Sources told the Sunday Times that in a series of mock battles, the UK's Household Cavalry played the role of an enemy using Russian T-72 tanks.

Britain-Russia tensions are being tested at the moment over the fate of two Russian military intelligence (GRU) agents who Britain accused of poisoning former Russian spy Sergei Skripal and his daughter Yulia in March this year, and over accusations that Russia is behind a host of global cyberattacks.

On Thursday, British and Dutch intelligence exposed an operation by the GRU to hijack the investigation into the assassination plot against the Skripals.