Here are 12 behind-the-scenes pictures showing the secrets behind his cinematic photography.

Jordi Puig Batlló is a 27-year-old photographer from Barcelona, Spain. He and his brother, Arnau, founded Jordi.Koalitic, a photography project and production company.

Batlló's photography style is inspired by his previous work as a filmmaker, where anything can look and feel cinematic with the right touch. It looks like the model is wandering through an abandoned house or looking through a broken window, but she's actually holding the frame herself to line up the shot just right.

"Everything can have an artistic point of view," he said. "I can photograph anything. The main point is about finding the angle, the impact, the perspective." The yellow swirl following the woman in the yellow raincoat wasn't added in Photoshop - it's a yellow Slinky.

To this end, he uses everyday objects to stage dramatic portraits. It looks like the tennis player is hitting the ball with his racket, but it actually took another person to throw the ball at the right height.

Seemingly Photoshopped, highly edited pictures with added special effects turn out to be comprised of simple elements and regular objects. Batlló used a flower pot lined with dirt to create the illusion of a hole in the ground.

"I would define myself as an artist, crazy like my photography, but at the same time, a person who knows how to enjoy daily life," he said. "That's why my photography style is marked by simplicity and daily things," he added.

What looks like a tunnel or sewer pipe leading out into the sunset is actually a plastic water bottle.

He feels it's important to show the creative process that goes into the polished end result that people see online. Batlló removed the bottom of a popcorn tub to shoot pictures from inside of it.

"People are surprised to see the simplicity that surrounds each idea, without Photoshop, just creativity," he said. 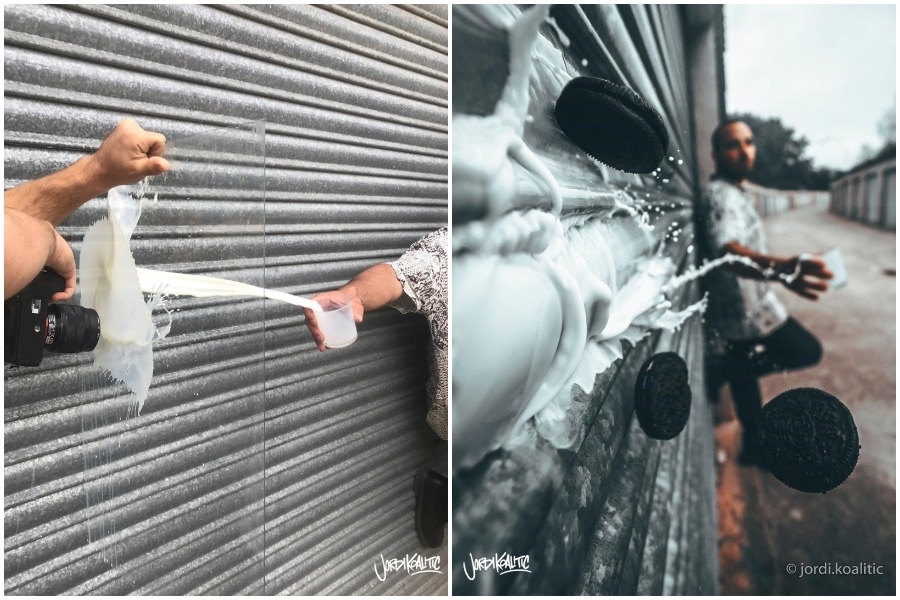 He held up a clear piece of plexiglass to avoid getting milk splattered on the camera.

One of the most complicated photos Batlló created involved using a shoebox to simulate a tomb. "For this idea, we went to a very specific location, during a sunset," he said.

But for other photos, the clever positioning of everyday objects does most of the work. Before Photoshop, there was fishing line. Batlló used the clear, fine string to dangle the donut in front of the camera and to make it look like it was being thrown.

Batlló hopes his work inspires others to create and look at the world in new and unexpected ways. It looks like the player in yellow scored the goal, but they had some help from an unseen assistant.

"I have realized that being creative and original is what matters the most within art and photography," he said. This shot involved three people to create - one to dangle the rock on a string, one to toss the shards at the right moment, and one to take the photo.