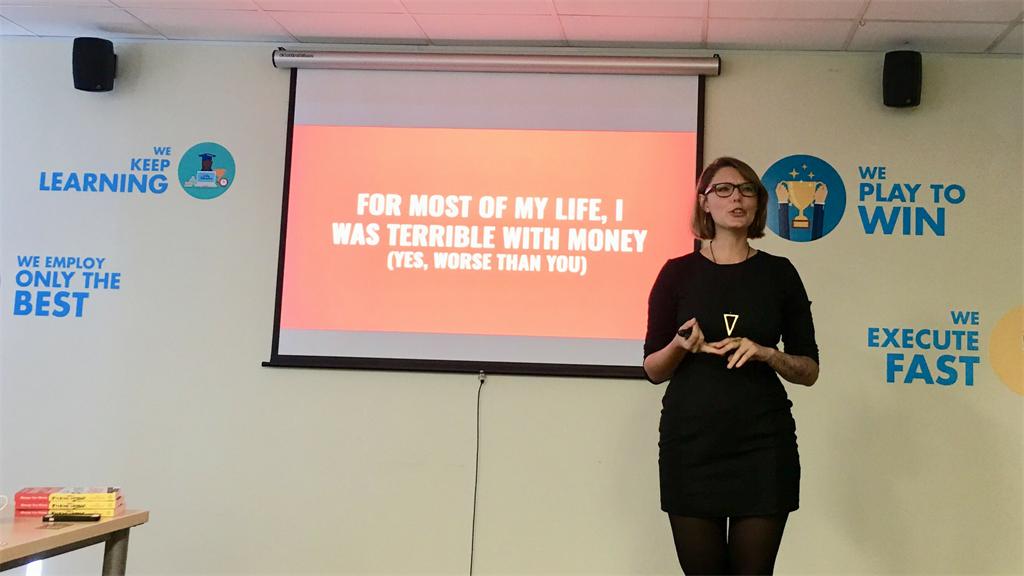 Sam Beckbessinger speaking at a Media24 event about her latest book 'How to manage you money 'like a f*cking grownup'. (James de Villiers, Business Insider South Africa)

Starting to be a grownup about your money is about understanding what emotionally is holding you back, says Sam Beckbessinger, author of How to manage your money like a f*cking grownup.

"And then you need to decide what do you actually want and what is your actual goals," Beckbessinger told Business Insider South Africa.

Buy How to manage your money like a f*cking grownup from Jonathan Ball Publishers here.

She believes most of what we've learnt about money is wrong.

"We never got an instruction manual about how money works. We never have to pass a test to get our money licence before we can take a new credit card for a drive," Beckbessinger says.

And in a country with an estimated R1.66 trillion consumer debt - averaging on R274,000 per person - she might not be wrong.

Myth 1: This is future me’s problem

"The temptation is to say I can start doing this later, but it turns out that the extra five years or ten years that you start [investing], that can actually  compound into being worth a huge amount of money at the end," says Beckbessinger, who had to work off a huge credit card debt herself.

She says there's a million rand difference between someone who saved R1,000 a month for five years at the age of 25, and someone who did the same at 30.

"Time is the single most important thing in our control," Beckbessinger adds.

Myth 2: Budgeting is about willpower "Our brains are not very good at discipline so when we try and create systems that rely on self-discipline we are just setting ourselves up to fail."

She suggests people set up systems that don't require discipline. One example Beckbessinger uses herself is to have two bank accounts: one for monthly expenses and a second for weekly pocket money.

"Now I don’t have to constantly worry if I can spend money on something ridiculously fun… I just have to check [the pocket money] balance and I know if I can."

Myth 3: If you rent you are just paying someone else’s mortgage She says disaster can strike that fixed asset, but more importantly, house prices have depreciated by 1% the last 10 years when compared to inflation.

Myth 4: Investing is only for rich guys who own wine farms in Stellenbosch

"You just need R250, you can go onto a website (https://www.easyequities.co.za) and you can fill in all the paperwork in like 5 minutes - that's how easy it is to buy shares."

One can either use a 'super impressive' fund manager to manage your investment or buy shares directly from the top 40 index or S&P 500, she says.

"The funny thing is 83% of the time, if you do the very lazy thing and buy the simplest shares [from the top 40 or S&P 500], you will outperform the [fund managers] trying to do the fancy thing and beat the system," Beckbessinger says.