The tax on one litre of petrol and diesel will increase by 25c in 2020, finance minister Tito Mboweni said during his Budget speech on Wednesday afternoon.

This as South Africa struggles with a budget shortfall of R370.5 billion.

Budget documents reveal that the national Treasury believes South Africans are already overburdened with tax, and that additional taxes to plug budget deficit would stifle economic growth – so existing taxes, including on fuel, will increase at roughly the rate of inflation instead.

Mboweni said the fuel levy would increase by 16c and the levy for the nearly insolvent Road Accident Fund (RAF) – which the Treasury said is the state’s second-largest liability after Eskom – will increase by 9c from the beginning of April.

National Treasury officials said the carbon tax was reduced in 2019 from an originally envisioned 10c per litre to 7c per litre of petrol, and 8c on a litre of diesel, to more accurately reflect carbon content.

It said carbon tax will remain unchanged in 2020.

In total, South Africans will, from April, pay R5.88 in tax on each litre of fuel.

This is slightly lower than the 40.6% of the average petrol price for 2019 which went to taxes. 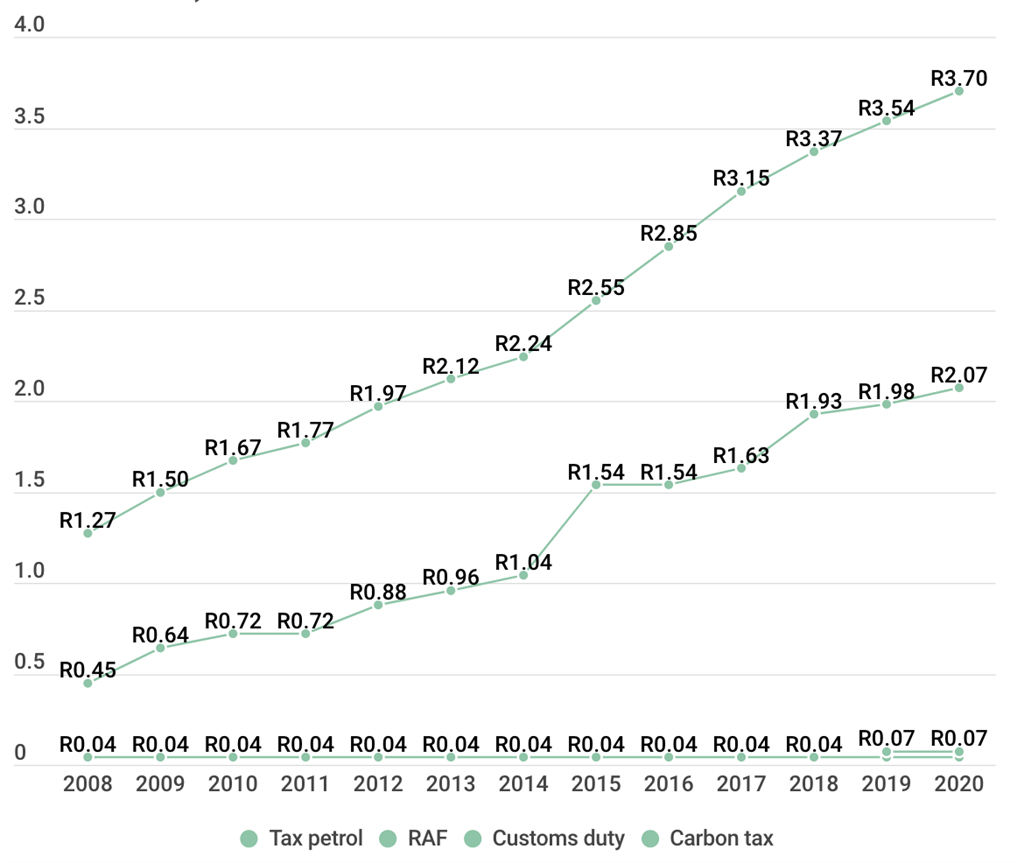 In budget documents, Treasury said the general fuel levy might be restructured to include a local air pollution emissions component, to be discussed in an upcoming environmental fiscal reform paper.

Other proposals will be considered with that paper at the base of the debate, including reviewing inefficient fossil fuel subsidies, taxes on electrical and electronic waste, and the tax treatment of company cars to incentivise use of more fuel-efficient vehicles, Treasury said.

Related Links
A plane dumped jet fuel over schools in Los Angeles, injuring dozens
The petrol price doubled over the past decade - with fuel tax jumping 132%
SA likely to see fuel price decline in January - thanks to a stronger rand
Next on Business Insider
The dollar and euro are on the verge of parity for the first time in 20 years — and it could happen within a month