You can track pangolins and find rare animals, plants, and birds at this Big 5 reserve in SA Roughly three hours north of Durban is the 70,000-acre andBeyond Phinda Private Game Reserve, which showcases some of South Africa's most notable animals, and a handful of rare and unusual species considered by many to be bucket list items.

Big Five fans will revel in the high possibility of spotting each at least once on a trip. And the reserve's marked success with cheetah reintroduction means Phinda now has a surplus.

Birders may choose to spend their time in the rare sand forest surrounding Phinda Forest Lodge looking for the elusive iridescent metallic green Narina Trogon — or any of the 436 other species that have been spotted in the reserve.

And while driving through the dappled forest light, it's also possible to catch glimpses of a shy red duiker or suni seeking safety in the thicker bush. Hopping off the vehicle for a guided walk among the ancient trees will reveal even more diminutive delights — like one of the smallest known flowering orchids in the world. Or the critically endangered Phinda button spider, a discovery confirmed just three years ago.

"There are roughly just 6,000 hectares of sand forest like this left in the world," andBeyond guide James Humphrey said as he shouldered his rifle, "and 1,000 of those hectares are right here in Phinda."

Humphrey explained many of the trees that make up the main forest canopy are hundreds of years old. The Lebombo wattle, torchwood, and false tamboti are the only ones to tower above the otherwise smaller trees and shrubs.

"As we walk through these forests, it's fascinating to look at the small details you might otherwise miss. We might spot one of the world's smallest flowering orchids and some rare spiders," Humphrey said as he ducked beneath a branch and onto an overgrown game path. "Of course, there's also every chance we'll encounter a leopard, lion, or hyena."

Humphrey soon found a flowering Microcoelia exilis orchid on an eye-level branch of a tree several hundred years old. The tiny plant is one of the smallest of its kind and is known by most as a pinhead orchid, for obvious reasons. 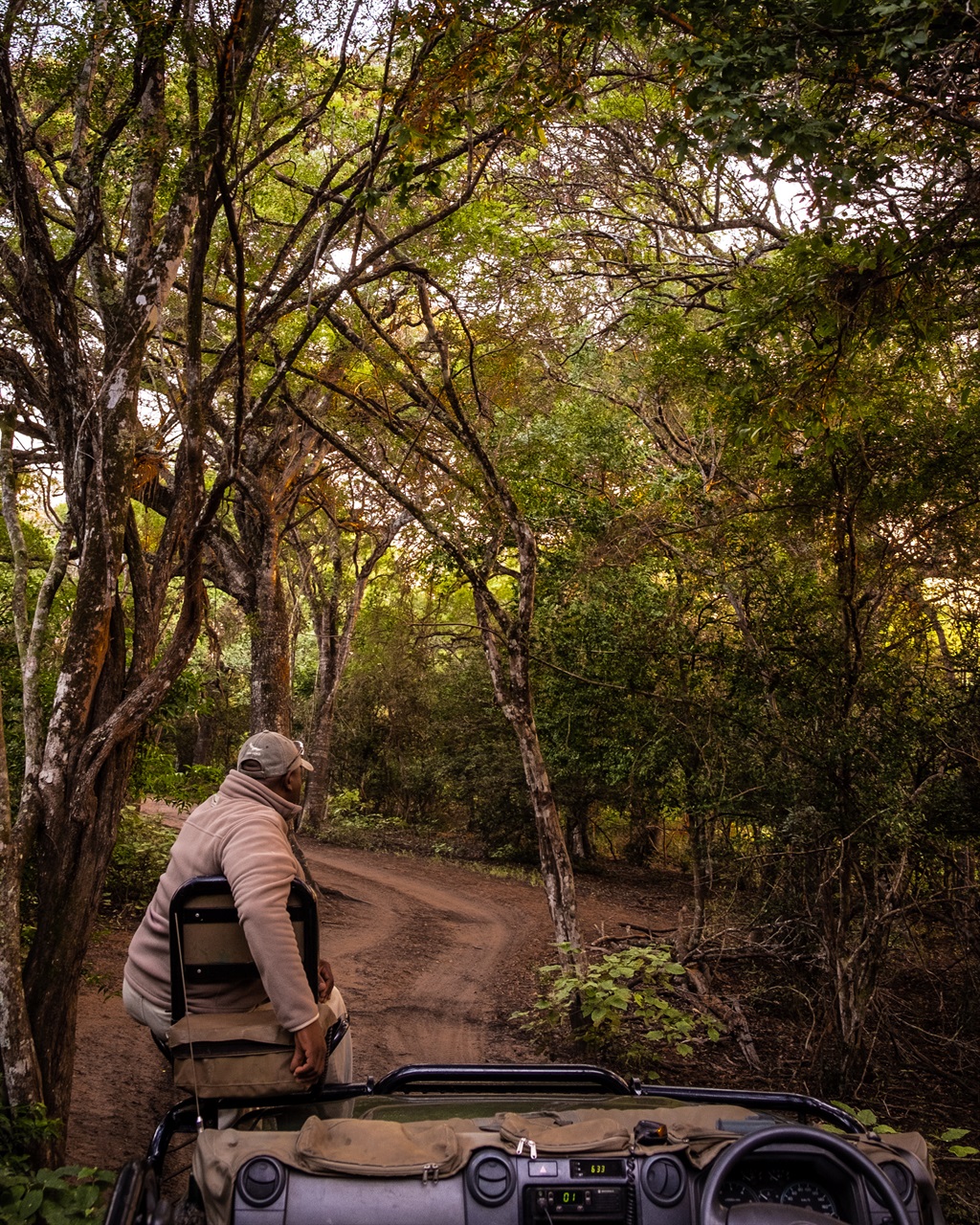 A few quiet steps along the leafy forest floor later, Humphrey dropped to all fours, scoured around a fallen log, and exclaimed with palpable excitement.

"This is a web of a Phinda button spider! You can tell by the type and location of the web and all the dead toktokkie beetles beneath it."

The actual spider proved elusive — which is hardly surprising given it evaded scientists until 2014 and who only confirmed its uniqueness in 2019. At the time, it was the first widow spider species discovered in 28 years.

But the disappointment of not seeing the spider was quickly erased by a sighting of a shy suni antelope, reaching no higher than our knees.

These tranquil forests envelop Phinda's stilted Forest Lodge and serve as the ideal atmospheric start and end of the twice-daily game drive. Game drives are well choreographed with other guides to maximise the chances of sightings of animals and minimise the possibility of encountering other eager guests. Only three vehicles are allowed to go in search of animals in a specific region, and rotations at prime sightings happen seamlessly.

Finding the elusive big game — lion, leopard, and cheetah — falls into the hands of expert trackers. Chris Matenjwa, who perched quietly on his seat atop the bonnet of our Land Cruiser, humbly proved his worth on multiple occasions.

Matenjwa miraculously spotted the faintest paw prints of various species on the sand roads even while the vehicle was moving at a reasonable speed. He instantly knew which animal had left it, the direction it was walking when it did, and roughly how long ago it might have been.

With a near indiscernible tap of the bonnet, he signalled for Humphrey to slow. Matenjwa would slide from his seat and wander off, with his eyes pointed attentively at the ground.

The most dramatic of these occurrences culminated in Matenjwa tracking a cheetah and her two cubs on foot while we searched elsewhere. Moments later, he radioed back to our vehicle to call us in for a remarkable sighting. Humphrey explained that with fewer open spaces than cheetah are typically used to, those in Phinda have adapted to hunt in thick bush. They'll catch their prey deep in the forests and feed there - which is precisely what the mother and her two cubs had done moments before Matenjwa had found them.

"Phinda has seen a lot of success with their cheetah programme," Humphrey said in a loud whisper as we watched the mother lap water from a muddy puddle. "So much so that we've sent many to other reserves in South Africa so we can keep our current population healthy."

It's this success that ecological manager Charli de Vos and her colleagues at Phinda are trying to emulate with other species - most recently with rescued pangolins.

"We received our first two pangolins in 2019. For security reasons, we're not able to share the exact number we've received since, but the project has been a major success," De Vos told Business Insider South Africa. The pangolin project at Phinda is one of many taking place around South Africa in conjunction with pangolin conservation groups and wildlife veterinary clinics. Organisations rescue the animals from imminent death and trafficking, nurse them back to health, and then grant custodianship to reserves for soft releases back into the wild.

Phinda was among the first reserves in South Africa to trial the release of pangolins back into the wild and is one of the most successful. Before their programme, the most recent record of a pangolin sighting there was in 1984. Now, De Vos says, about one untracked pangolin sighting a month comes through to their offices.

For many, seeing a pangolin is the last significant African animal sighting on their bucket lists - and rivalled only by seeing the remaining gorillas. To increase the possibility of spotting the elusive pangolin to a near guarantee, Phinda runs three monthly pangolin conservation experiences for guests.

During these experiences, guests join the conservation team as they track a reintroduced tagged pangolin and watch as they perform necessary tasks to monitor its health and wellbeing.

The experience costs approximately R13,500 per group of six, and this money goes directly back into Phinda's pangolin conservation efforts. The average cost of looking after an individual pangolin, excluding veterinary bills, is R200,000 for the first year, and R120,000 for the second year, which means the fee makes only a small dent in the overall costs. But De Vos says it's a tremendous help to their efforts and hugely popular activity.

"After doing the pangolin experience, most guests fall in love with this animal. It's a strange prehistoric looking thing, a cross between an artichoke and a pinecone, with odd, clumsy behaviour. But pangolins are quirky, and people love quirky," De Vos said.

The pangolin experience books up months in advance. Because of its popularity, the reserve now also runs standby lists for especially keen guests.

While most guests visit Phinda for its famously luxurious lodges, high-end hospitality, and memorable animal sightings, conservation awareness and activities are playing an increasingly important role.

"If we don't get involved with programmes like these, pangolins will go extinct," said De Vos. "And with Phinda meaning 'return' in Zulu, we feel an obligation to safeguard all our animals and do exactly that as we give them a second chance at a wild life." andBeyond Phinda is a three-and-a-quarter-hour drive north of Durban's King Shaka International Airport, where most major car rental companies have offices. Alternatively, it's a seven-hour drive from Johannesburg.

There are seven lodges located in andBeyond Phinda, each in different ecosystems and with a unique design. All conservation experiences require a three-night minimum stay at any of these lodges.

South Africans and SADC citizens pay less than foreign guests, and andBeyond's Bateleur Club offers significant discounts of up to R10,000 per person per night at off-peak times.

Related Links
Everything we know about the pangolin — the scaly mammal that may have spread the coronavirus to...
From Delta to desert: the best of Botswana in the midst of a pandemic
There's never been a better time to visit the Masai Mara and Serengeti - but it won't last long
Next on Business Insider
One of Europe's busiest airports is offering cash to people who missed flights because of huge lines