Something a world-famous bartender recently said on bars and dating culture stuck with me.

Jim Meehan, author of "Meehan's Bartender Manual," said that in the early years of his career, bars weren't where people went on dates, but to find dates.

Nowadays, online dating has changed the game. And as a bartender in the age of dating apps, I'm grateful that I'm spared the horror of seeing real-life Tinder swiping in front of my eyes.

But one painful ritual I'm frequently audience to is the cringeworthy first date. I've witnessed countless first dates play out from behind the bar, and I've gotten a sense of what works and what doesn't from both parties.

These are the worst and most frequent mistakes I see people making, and what they could be doing better.

Know the kind of bar you're going to 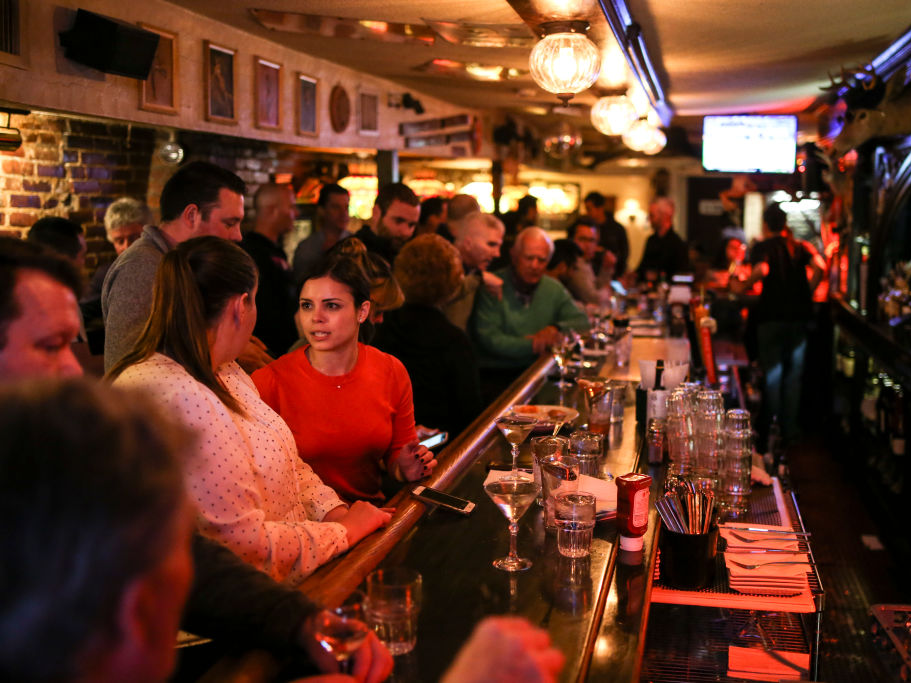 Nathan Klima for The Boston Globe via Getty Images

Because of apps, most of us go in relatively blind to first dates - we haven't met our match in real life.

But that doesn't mean you should go in blind to the bar, too. You don't have to be the person who didn't make a reservation, who or is overdressed or underdressed, or not ready for the sticker shock of the menu. I've seen all of the above, and other than being small-talk fodder for the date, it's not a good look.

Scout a place before the date on another day. Make sure you know things like the likelihood of there being a wait, or if the atmosphere is entirely too romantic, or too loud to hold a conversation.

But be cautious of over-familiarity

It's also funny to me when people take a different date, week after week, always to my same bar.

We bartenders won't do it on purpose, but you are running the risk of having us inadvertently reveal your penchant for dating around, which also might not be a good look.

"Hey, there. Same as last week? Old Fashioned for you and a Bee's Knees for the lady?"

In my effort to flex my ability to remember your face and drink order, it's not uncommon to accidentally reveal you were here last week with someone else. Someone who in this case apparently likes to drink a Bee's Knees.

Always check your card balance before you go out to make sure you have enough to cover your bill. Or if you're out of town, make sure your bank won't lock out your card for security reasons.

I always try to be discreet if I can tell someone is on a date when their card is declined, but if you don't have cash or another viable card, that date you intended to treat may end up footing the bill. Awkward.

Always tip your bartender 20%. No matter how the service was. Every time, whether you're on a date or not, frankly. But especially on a first date.

Because even if waiting tables or making drinks isn't your date's current profession, you never know if they were a former service industry worker themselves, and will be sensitive to the issue.

I can almost guarantee they're going to check and see how much you tipped. And a good tip will show them you acknowledge the hard work that goes into a service industry job, which usually comes with a base rate below minimum wage.

A tip higher than 20% would be, ahem, uber classy, and would demonstrate generosity.

And if you know that your date has worked as a bartender and still don't intend to tip 20%, just stay home.

Side note: If a customer gives me their phone number while I'm bartending, but they tip less than 20%, I'm immediately throwing it away.

This one probably speaks for itself.

It's also pretty awkward to get cut off by the bartender on a date with someone new, as happened to me just a few weeks ago. After balking and accusing me of simply not wanting to serve him, the young man - yes, it's usually the men over-imbibing - left a one-star Yelp review about it.

I imagine being cut off in front of your date is less embarrassing than falling down the stairs at a three-storye bar, so I maintain that I was helping him in the long run.

When it comes to conversational faux pas, oversharing is a big one

I've seen more than one dater's eyes glaze over as their date regurgitates a spectrum of emotions on topics relating to their exes, drug use, daddy and mommy issues - the list goes on.

It's one thing to have a back-and-forth where you've connected on deeper, emotional topics on a first date, but when it's a monologue, it's like watching a therapy session. A really awkward therapy session.

Daters often have go-tos, like travel and television, but miss cues that their date doesn't care

Even traditionally "safe" topics, like travel, can go awry when daters use it as a conversational crutch.

From polling other bartenders, I can say the television show most heavily abused as a first date conversation topic that goes absolutely nowhere is "The Office."

So if your conversation is going this way: "Have you seen 'The Office'? No? Well there's this scene where …"

A lot of conversational topics are fine with a good mix of questions. But the other type I see are like trial lawyers: They cross-examine their date

I've seen a lot of dates become deeply uncomfortable because they start to resemble a job interview.

Often, the questions are too probing and invasive.

If you're trying to figure out your date's marriage goals, bank account, and family disease history on the first date, you probably won't get a second.

Don't bring up your conspiracy theories on a first date

Or maybe do. They are loads of fun for me to hear.

The best so far was a guy on a first date revealing he believed that "the moon is a manmade construct." A serious level-up from the "we faked the moon landing" theory. Not as good as the "moon is made of cheese" hypothesis, though.

I remember one incident where a guy was so freaked out by something, that as soon as his date went to the bathroom, he had to tell the bartender I was working with: He thought his date was great-looking, but her dating profile pictures must have been at least 15 years old.

People may be judgmental jerks about your appearance. But some won't be. Misrepresenting yourself, on the other hand, perturbs everyone.

Don't mansplain things to the bartender to try to be impressive

I think it's a good thing when a couple on a date can make good conversation with the bartender. People reasonably make character judgments about others based on how they treat those serving them. Warm conversation can go far.

But men in particular are enormous offenders of bad bar chatter with the bartender when on dates.

Sharing enthusiasm on spirits, asking questions, and even sharing some information is fine. Condescending sermons on things I already know, like the difference between bourbon and rye, do not impress me and do not impress your date.

Likewise, don't order an overly complicated drink to flex on your date

The look I will give you while I make your Ramos Gin Fizz - an eight-ingredient cocktail that requires so much shaking that some bars just use a blender instead - will indicate to your date that you are a bona fide jerk.

Especially if I can tell you ordered one in an attempt to seem impressive.

Any time I've been serving or bartending and a dater bickered over trivial bill errors (that often weren't actually errors), I usually notice a curled lip response from their date.

You don't look assertive. You look cheap and petty.

Likewise, don't send back a drink when it's not exactly to your liking. Suck it up.

And men especially, don't act so affronted by a 'girly' drink

Don't insist that I pour a cocktail meant for a stemmed coupe into a rocks glass in front of your date.

Plus, as I have in the past, I will make the next drink three times as effeminate just to make you reveal your fragile masculinity all over again.

Finally, if you insist on doing any of the above, don't sit in front of me

Please, spare your bartender. We aren't like servers. We're stuck in front of our well.

And you always seem to insist on sitting right in front of us.

Sure, witnessing the schadenfreude can be entertainment. But it's mostly just cringeworthy.