For centuries, mountains and lakes posed massive problems for engineers.

In both cases, they make travel nearly impossible and can make trips longer by days or months to bypass obstacles.

However, with the invention of Marc Isambard Brunel and Thomas Cochrane's invention of the tunneling shield in the 19th century, that all began to change. Tunnels could go deeper - underwater through bedrock - allowing for quicker travel times.

From particle accelerators to portals through Switzerland's famous Alps, today's tunnels built with advanced Tunnel Boring Machines make Brunel's original London Thames tunnel seem tiny by comparison. For the purposes of our roundup, we excluded most metro tunnels, which are often built by cut-and-cover methods instead of boring, and water tunnels, which humans can't travel through (easily, at least.)

These are the world's 12 longest tunnels: Perhaps the most interesting tunnel on this list, the Large Electron-Positron collider tunnel is the only one on the list you'd have some trouble trying to travel through. Built in 1988, the tunnel at CERN's complex on the Franco-Swiss border has been the home to several particle accelerators used by nuclear researchers at the centre. This portion of the Tube's Northern Line is still the United Kingdom's longest railway tunnel. Despite the exclusions of many other metro tunnels on this list, this portion makes the cut because the entire length was bored through solid rock beneath London's streets. The New Guanjiao tunnel replaced an existing tunnel, built in the 1970's, through mountains in the rugged Tibetan plateau. Lötschberg Base Tunnel was formerly the longest in the world until the Gotthard tunnel was completed nearly a decade later. 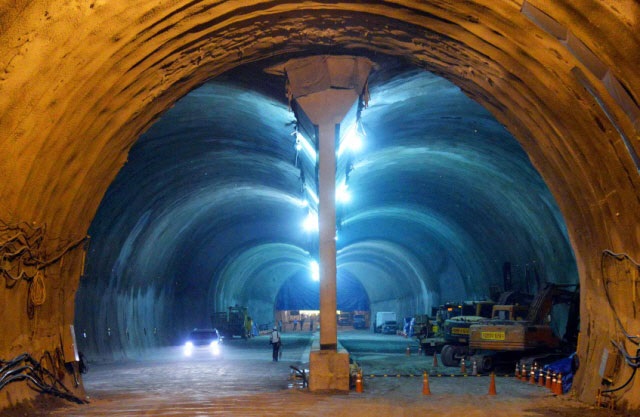 South Korea's Yulhyeon tunnel is virtually tied with the Channel Tunnel, and took more than three years to to carve the shortcut on the Korean peninsula.

While the Channel Tunnel has a longer underwater length than Seikan, its total length falls about two miles short of its Japanese counterpart. Seikan is the world's longest tunnel with an underwater segment, beating the Channel Tunnel in total length, but not in terms of how much is under water.

The Gotthard base tunnel is the longest tunnel by distance and also the deepest. Read more about the tunnels history and construction here.