40% of US honeybee colonies disappeared last year. This is what the world would be like without any bees at all. 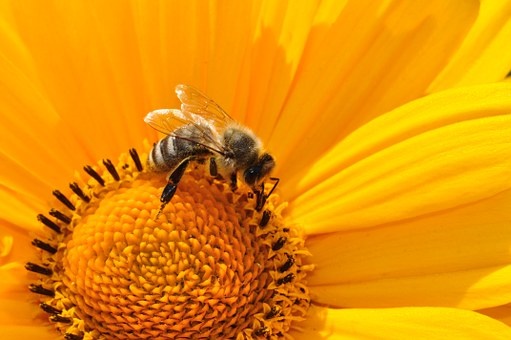 Bees are getting so scarce and so valuable that people are stealing hives from almond farms in California and selling them at steep prices.

That's because the populations of both domestic honeybees and wild bees have been in decline for the last few decades. Extinction rates for pollinators have jumped to 100 to 1,000 times the normal rates, according to the Food and Agriculture Organization of the United Nations (FAO). About 40% of invertebrate pollinators, especially bees and butterflies, are facing extinction worldwide.

Today, the US has only 2.5 million honeybee colonies, less than half of the bee settlements it boasted in the 1940s.

Bees perform a crucial role in fruit, vegetable, and nut production - without the pollination work they do, humans would have to say goodbye to (or pay very steep prices for) some of our most nutritious foods, including berries, apples, almonds, cucumbers, peppers, and seeds.

This is what the world would look like without bees.

The survey is conducted by researchers at the University of Maryland, and the beekeepers who participate manage (in total) 320,000 of the 2.69 million honey bee hives in the country.

The rates of bee colony collapse slowed in 2014, but losses recently picked up again.

Last year, the US lost 40.7% of its honeybee colonies.

Most of those colonies died or disappeared during the winter - the highest winter loss since the survey began 13 years ago.

"These results are very concerning, as high winter losses hit an industry already suffering from a decade of high winter losses," Dennis vanEngelsdorp, a University of Maryland scientist, said in a press release.

When the majority of a colony's worker bees disappear and leave behind the queen, baby bees, and lots of food, that's called Colony Collapse Disorder (CCD). The mysterious phenomenon has caused enormous bee losses since at least 2006.

Researchers have identified a barrage of threats to bee health that could be responsible.

One factor is that bees are getting sick. New viruses and a new fungal gut parasite are killing bees worldwide. American foulbrood, the primary bacterial disease affecting US honeybees, has developed resistance to the antibiotic that beekeepers once used to prevent it.

Hives can also be invaded by parasitic mites. During the winters of 1995 through 2001 in particular, mites decimated bees across the northern US, wiping out entire beekeeping operations. Today many mites are pesticide-resistant.

Human activities can also stress bee colonies to the point of collapse. Bees, like humans, can't lead healthy lives consuming just one type of food, so as more farms grow miles and miles of a single crop, bees have to fly too far to get the nutrition they need.

Pesticides sprayed on crops also play a role. Some are poisonous to bees and have been directly linked to their population collapse, so the US Environmental Protection Agency (EPA) banned 12 pesticides that are harmful to bees this year.

Wild bees are declining too, and some studies suggest that they do more pollination than domesticated honeybees.

In a study of 41 crops grown worldwide, researchers found that increasing wild pollinators' visits to a crop improved fruit production by twice as much as an equivalent increase in domesticated honeybee visits.

But these wild bee species are suffering declines, too. One study found that 50% of native bee species in Illinois had disappeared over 120 years, while another revealed that 14 New England bee species declined as much as 90% over a similar time period.

What's more, domesticated honeybees might be spreading lethal viruses to wild bee populations, according to a study published in June.

The way things are going, Earth could lose all its insects by 2119. Roughly 40% of the world's insect species are in decline, according to a study published earlier this year. Researchers found that the total mass of all insects on the planet is decreasing by 2.5% per year. If that trend continues unabated, the Earth may not have any insects at all by 2119.

That loss could trigger a "catastrophic collapse of Earth's ecosystems," the study authors wrote.

Without bees to pollinate crops, yields on about 35% of agricultural land worldwide would suffer, and 87 of the world's leading food crops would be affected. Worldwide, farmers are growing more and more pollinator-dependent crops like cocoa, tomatoes, almonds, and apples. The volume of such products has tripled in the last 50 years.

All in all, those crops are worth up to $577 billion (R8.8 trillion) annually, according to a UN report.

In the US, more than one-third of all crop production ?- 90 commercial crops, including nuts, berries, and flowering vegetables ?- relies on insects for pollination.

The same is true for nuts and seeds.

Almonds depend entirely on bees for pollination.

Each year, beekeepers from around the country travel to California's almond farms, bringing more than 31 billion honeybees to pollinate the almond trees. Each tree is only receptive to pollination for about five days, according to Scientific American.

California produces 80% of the world's almonds, and those California crops alone call for 1.3 million bee colonies each year - over half of the existing colonies in the US. That need is projected to grow as the world demands more almonds, according to the USDA.

Without bees, you'd also have to say goodbye to your morning brew, or at least pay a lot more for it. Coffee plants can pollinate themselves, but they need help from bees to produce strong yields. Their flowers are only open for pollination for a window of three to four days. If the flowers aren't pollinated, the plant is much more vulnerable to disease.

More than half of the fat consumed around the world could be in trouble without bees, since all of the world's oilseed crops at least partially rely on bee pollination.

Globally, humans get half of their fat from oilseeds like cotton, sunflower, rapeseed, coconut, and oil palm.

Rapeseed pollinated by bees produces seeds with higher oil content, according to the FAO.

Bee pollination also improves the quality of crops. A study in Burkina Faso found that cotton and sesame plants pollinated by bees had an average of 62% higher quality and quantity than those that self-pollinated.

Similarly, a European Commission study found that bee-pollinated strawberries are heavier, redder, firmer, and have fewer malformations than those that are wind-pollinated or self-pollinated.

Those strawberries also had longer shelf lives, which reduced the amount of fruit that went bad during storage by at least 11%.

Cows and sheep also eat crops that depend on bees for pollination, such as alfalfa and clover. So dairy would become more expensive without bees as well.

Undernourished animals don't make much milk, so the dairy industry would struggle to produce cheese, butter, or yogurt if bee populations continue to drop significantly.

Losing bees could even mean losing the clothes you like to wear, if they're made of cotton.

The world has other pollinators, of course, but bees are best. Bees are called "busy" for a reason. Unlike birds and butterflies, bees work together and use exceptional communication and memory skills to visit hundreds of flowers each day.

Honeybees are particularly effective pollinators because of their social behavior. A colony holds 20,000 to 80,000 bees, and they fly en masse to visit flowers up to 5 miles (8km) away.

Honeybees often develop an affiliation for particular flowers; as a result, they often carry pollen from just one species of flower, which means they bring the right type of pollen to the flowers they visit.

Other bees and pollinators carry pollen from multiple species, which increases the chances that they will bring the wrong pollen to the flowers they visit.

Overall, losing bees would lead to much higher levels of food insecurity.

Many nuts, fruits, and vegetables that rely on bees are crucial to a balanced diet. If they become scarce, people would have to eat more starches like rice, corn, and potatoes.

Reduced crop yields are also especially threatening to the more than 820 million people who are already undernourished worldwide.

There's also a financial cost, of course. Crops that require pollination are five times more valuable than those that don't, according to the FAO. In the US, honeybees are estimated to contribute $15 billion (R229 billion) to the economy.

Wild bees, like bumble bees and alfa leafcutter bees, contributed $9 billion (R137 billion) worth of pollination services in 2009, according to a 2014 White House report.

Human hands and technology can pollinate crops, but it's pricey.

Hiring humans to do bees' jobs by hand could cost over 65 times more than bringing in bee hives, according to a 2008 study of the fruit industry in South Africa. The practice is common in China, but it may not be feasible everywhere.