In an Essence survey, 45% of Black women polled said the workplace is where they most often experienced racism.
Brothers91/Getty Images

Even on her worst days, Joselyn Ink prefers working from home. She works at a nonprofit in Los Angeles that, she said, "has a 100% turnover rate for Black staff."

"They've never had more than five Black staff at a time," Ink, 32, said. "Last year they lost, like, every Black staff member they had - except for me." The nonprofit did not immediately respond to a request for comment.

Working from home gave Ink control over her space and allowed her to avoid certain troublesome situations, she said. Other Black women Insider spoke to said working from home gave them more agency over their lives, often marred by racism; more freedom to express themselves in a world that has politicised their looks, and more confidence to speak up when something goes awry.

It's true that, for many people, remote work provides unmatched flexibility and comfort. For Black women, it also provides an antidote from office environments frequently brimmed with misogynoir - a term coined in 2010 by the queer Black feminist and academic Moya Bailey to describe a toxic mix of racism and sexism toward Black women.

The opportunity for remote work can help improve the mental health of Black women, psychologists said. Many Black women told Insider they felt better expressing themselves and managing the type of microaggressions they encountered each day.

Working from home helps Black women have better control over their environments and stressors. Remote work also helps in eliminating commute times and childcare expenses, issues that disproportionately disadvantage Black women. Companies may still have work to do in becoming better working environments for Black women, but flexible working schedules in the meantime can help alleviate office stress, experts said.

Ink recalled a work meeting with her company earlier this year that discussed racism. Afterward, a white coworker sent her an email saying she felt "unsafe" in the meeting, as well as "lectured and belittled." This time, Ink was able to get up from her computer, walk away, regroup, and recharge before heading back into the fray.

"If I was in the office, I wouldn't know what the hell to do," Ink continued. "I wouldn't even be able to leave my desk because someone would say, 'You just took your break.'" Microaggressions include touching a Black person's hair and tone policing, in which someone asks a Black person to be "nicer" in how they say something.
Klaus Vedfelt/Getty Images
It's about control

Last year, Katherine Cauley bleached and cut 16 inches of her hair after realising working from home would become her new normal. Cauley, 25, works as an energy utility specialist in Chattanooga, Tennessee. Her coworkers often commented on her hair, she said, asking if it was really hers, how long it took to groom, and how long the style would last.

"They asked a lot of questions that felt overwhelming to me," Cauley said, adding that many were "well-intentioned."

Working from home spared her the curiosity of her white colleagues. "I started changing my hair like crazy because I didn't have to hear anything about it," Cauley said.

T.J. Lumpkin works in the finance industry and grew up in a predominantly white neighbourhood in Georgia. She said growing up, children commented on her hair so much that she learned to internalise the way in which she should appear in majority-white spaces.

"I now make it a point to not change my hair nearly as much," Lumpkin, 25, said. Working from home freed her from that, and now she wears wigs, twists, sew-in wigs, and double Afro puffs. "Now I'm not in the office, I do my hair while I'm at work. I don't even have to take time off now."

Microaggressions such as these happen at such a high frequency in office environments for Black women that there's no time for mental recovery, said Erica Reed, a workplace psychologist. "That's the definition of toxic stress," she said of working in such environments. "When a person is removed from that environment, they're able to now work from home and have recovery time."

Situations, such as not seeking or being given the chance to touch a Black woman's hair, give agency and control back to the person; it's about defining space in the workplace and being able to successfully defend the set boundaries. "You cannot expect anyone to stay engaged, productive, or connected when they experience toxic stress of trauma," Reed continued. Microaggressions do transfer from Zoom, but being able to control their environments has helped some Black women better handle the stressors associated with an office environment.
Klaus Vedfelt/Getty Images

The Slack survey found that 64% of Black respondents said they were able to better manage their stress while working from home. Princess Pierre, a 34-year-old public-relations coordinator in Florida, said her company wasn't diverse. "I can count on my hands the amount of Asians and Blacks in the company," she said.

For her, she said, virtual work allowed for more concrete documentation of instances happening in the workplace. She can record meetings whereas before she wasn't allowed, and email correspondences provide a paper trail in case a situation goes awry.

"You're not seeing my Blackness in your face," Pierre said about working from home. "You're just getting the colleague side of me. I feel like I've gotten a lot more respect, actually."

There are other benefits Black women can specifically take advantage of while working from home. 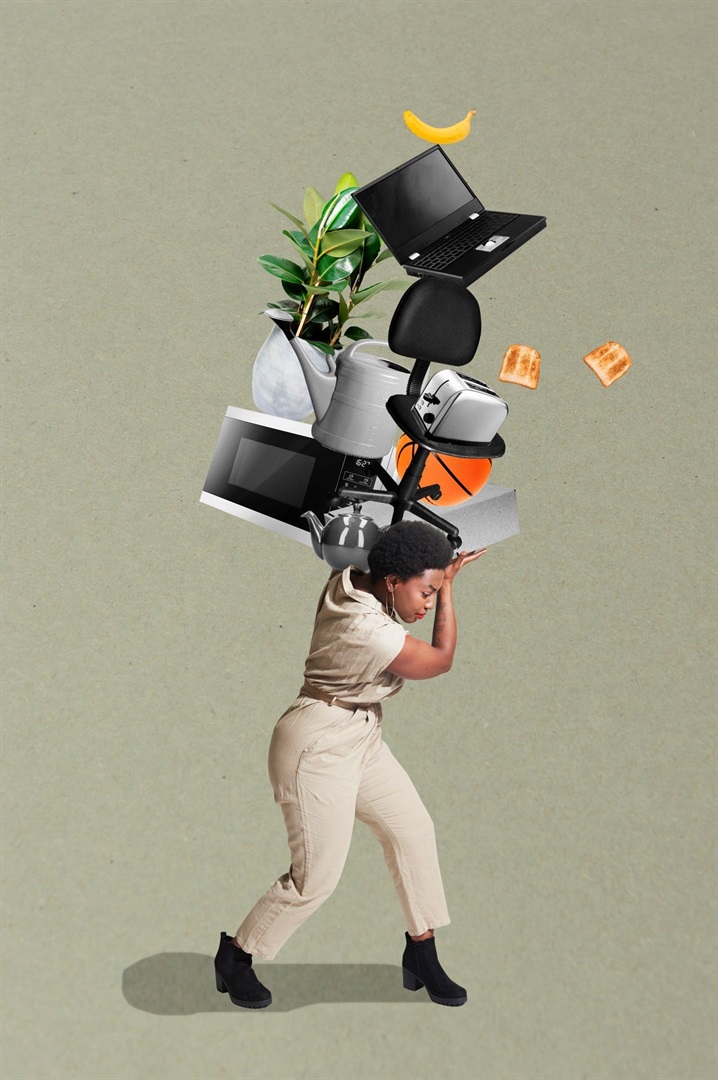 It is instilled in Black women to work twice as hard for even just half of what their white counterparts have. From childcare to work life, the burden becomes tiresome.
We Are/Getty Images

Reed said being able to work from a comforting environment provides protective factors, such as solace and support systems, that can be encouraging and validating to help cope with average workday stressors. The psychotherapist Farah Harris said that while working remotely, Black women also aren't constantly reminded that they're often the only Black people in a meeting.

Being able to stay at home while working also helps save costs on childcare, Harris said. Over 60% of Black women are the breadwinners for their families. They are either the sole earners or make at least 40% of the family income, The Atlantic reported. Yet, the Brookings Institution found this year that Black mothers are less likely to be able to take breaks from their jobs, work from home, or be able to find outsourced childcare.

Many Black women are also able to save money and time on their commutes. Centuries of redlining and housing discrimination shunned Black workers from communities that provided housing near places of employment and educational opportunities.

These long commutes can be stressful and detrimental to one's mental health and social well-being, Reed said. Erasing them can leave more personal time, allowing people to create routines and better space out the day in ways that benefit them.

But this conversation is still class-specific. Kimmika Williams-Witherspoon, a Black professor at Temple University, said many Black people don't even work in jobs that allow them to work from home. And those who do face severe wage gaps, a lack of professional mobility, and a lack of mentorship opportunities.

Everyone Insider spoke with agreed that microaggressions and toxic workplaces do spread through Zoom. Ink said she was nervous about going back to the office, especially after the email her coworker sent. "The only thing worse that she could have done is come up to me and slap me in my face," Ink said. "But because we're working from home, she doesn't know where I am."

The violence of a toxic workplace, Ink continued, sometimes seeps into her home, rather than on the passenger seat of her commute. She has to return to the office next month but said her doctor has yet to approve her return. "I've woken up with nosebleeds from the stress of having to deal with those people," Ink said.

Cauley's work has adopted a flexible schedule, though she has no intention to return to the office. She once had to cater her speech "so specifically" to be professional while in her workplace, but being at home has given her the freedom to exist and be herself, she said.

"I've never met my manager in person," Cauley said, adding that she was promoted during the pandemic. "I'm not saying I don't want to meet him, but it's just so cool to be able to just exist as who I am."

Retaining this flexibility for work can be a small step toward creating safe working environments. The benefits that remote work give are helpful, but policy and structural change within companies are what may truly provide equity to Black women in the office.

After all, no workplace is inclusive if people feel they have to retreat to their homes to feel safe. Balancing childcare at home and work duties is still a challenge, and Zoom doesn't often provide a place to hide, as Harris said, since being seen is important for Black women to succeed in the workplace.

"Black women straddle the line of being hyper-visible yet unseen," Harris said.

The clinical psychologist Danielle Spearman-Camblard believed that companies need to pay attention to the situations Black women are dealing with at the company, provide more anti-racism education, and explore how misogynoir manifests and how to dismantle it.