Women are faster long-distance runners than men, and it's probably because they've got more oestrogen A competitor gets water at a checkpoint during the Half Marathon of Sables Ica Desert-Peru, in Paracas, Peru, on December 3, 2019. The race was 109 kilometers divided into 3 stages.

Run like a girl, and you will eventually beat the boys.

A new study suggests that at some of the very longest distances that people run, women tend to outperform men on a minute-per-mile basis. The reason why women might have a slight performance advantage in super-long running races likely boils down to differences in two key hormone levels between sexes.

The study, conducted by running shoe review site RunRepeat in collaboration with the International Association of Ultrarunners (IAU), looked at the race results of 5,010,730 ultramarathoners, those ambitious distance runners who continue well beyond the 26.2-mile (42.1 km) confines of a regular-length marathon. It examined an enormous set of finishers' results, spanning 15,541 different ultra races conducted between 1996 and 2018 and accounting for over 85% of all ultrarunning events worldwide.

"The difference is quite small, but it's still relevant," exercise scientist David Rowlands from Massey University, who was not involved in this study, told Insider. "A 0.6% difference in time is substantial, over a 195-mile (313 km) race." 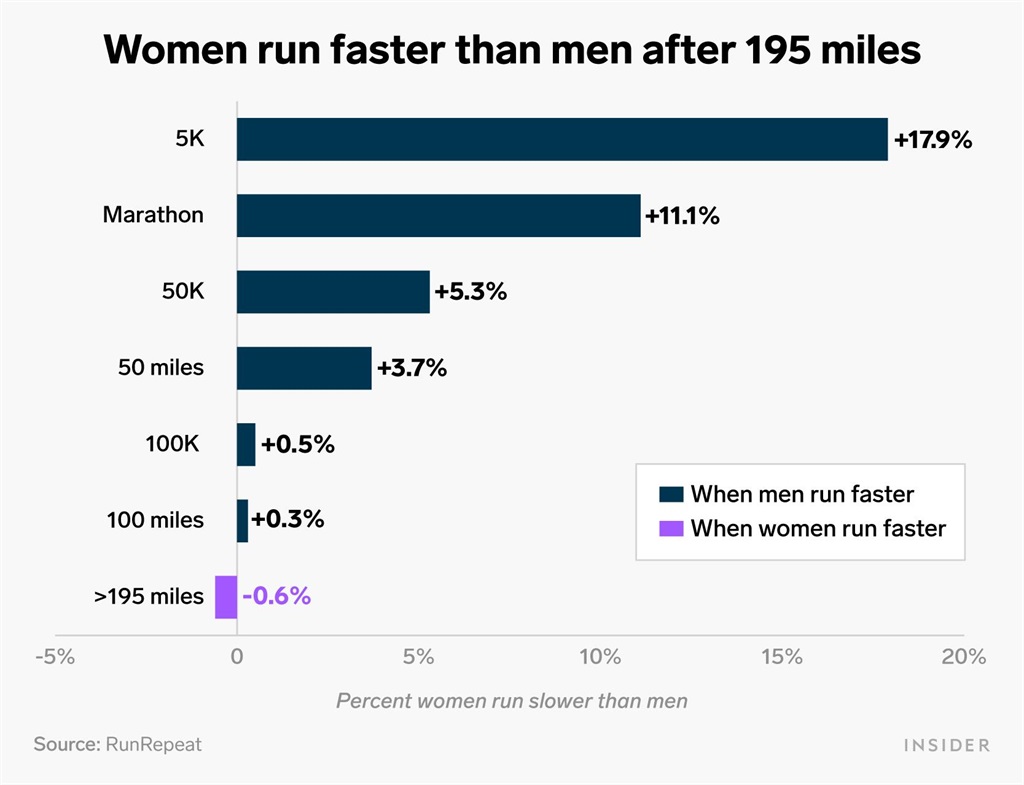 The finding is not a complete surprise to exercise scientists or endurance athletes like Rowlands (himself an elite cyclist), who know that as endurance races get longer, the gap between top women's and men's finishing times shrinks. But it is still "exciting," he said, to see that there's a point at which women begin to "outperform" men.

Men are, on average, faster than women when it comes to sprinting and marathoning. This is largely because of their generally bigger hearts, which can deliver more fresh oxygen to the body, and to bigger stores of the sex hormone testosterone, which can make muscles bulkier and stronger.

Men are also able to store more glycogen in their muscles than women, which is like a quick-release fuel for speed. That fast-acting fuel can be used efficiently as energy early on in a race, before people must begin to tap into their fat stores.

But muscles and testosterone can only get the men so far. At some point, the fact that they have less estrogen on board than women becomes apparent. As ultra race distances get longer, estrogen becomes like a performance enhancer for women in a few different ways.

"Natural energy stores in your muscles, those will last you for the first four hours of the race," Dr. Mimi Winsberg, an avid Ironman triathlete and psychiatrist who's competed in 25 races to date, told Insider. "After that, you need to be providing your body with fuel, or burning fat."

Women might be better at burning fat for fuel than men People compete in the Marathon des Sables, in the southern Moroccan Sahara desert, on April 12, 2019. The marathon is a live stage 250 kilometer race through a formidable landscape in one of the world's most inhospitable climates.
Jean-Philippe Ksiazek/AFP via Getty Images

During really long ultra races, men seem to burn out harder than women do, and exercise scientists suspect that estrogen is a key player in giving women that edge.

He says there's "not enough data," to solidify the argument yet (generally speaking, there's not been enough performance data gathered about women in elite sports), but it's possible that estrogen helps make more fat available to the body as a fuel source once initial energy stores of glycogen have run down. US runner Rory Bosio was the first woman to finish the 11th edition of the Ultra Trail race, a 168 kilometer run around the Mont Blanc crossing France, Italy and Switzerland on August 31, 2013 in Chamonix.
Jean-Pierre Clatot/AFP via Getty Images

"Women's bodies have evolved to be able to store fat in ways that men have not, for the explicit purpose of pregnancy and breastfeeding and being able to support a child within your body," Winsberg said.

Estrogen may also help improve super long-distance running performance because it helps protect muscle membranes, making muscles function more consistently and without as much fatigue over long hours of running.

Finally, it's possible that there's a psychological component at play in long races, and that women who run ultras have a mental edge over men.

This is harder for scientists to test.

"When you start talking about a 200 mile (321km) running race, it's not about going fast," Winsberg said. "It's actually about not slowing down, so those are a different set of psychological skills." But there's one important caveat to note about the results of this study, which were not peer-reviewed, or published in a scientific journal. It seems that as ultra races get longer, the percentage of women competing in them also gets smaller. It's possible that the few women who choose to run distances approaching 200 miles (321 km) at a time are already some of the best runners around.

Some anecdotal evidence already suggests that it could.

Take the case of Maggie Guterl, who became the first woman to win the Big Dog Backyard Ultra in 2019 by completing 250 miles (402 km) in 60 hours, besting all the other men and women in the race (who dropped out before her).

"I wanted to keep going," she told Outside Online. "I had this thing in my mind that it would be cool to beat what they did last year, and even break that 300 [mile] (482km) barrier. I've never run through three nights."