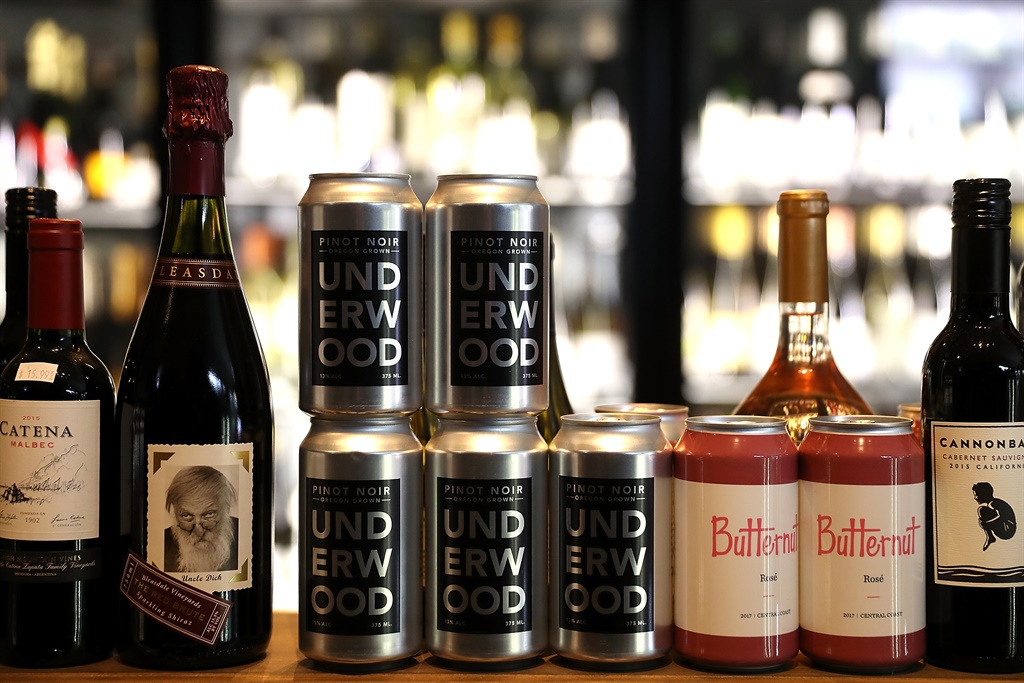 Some of the canned wine products available in the US. (Getty Images)

And this upward curve doesn’t look to be slowing soon, mostly thanks to millennials who prefer the cheaper and more portable packaging. It is also more economical: you don’t have to buy a whole bottle if you only want one or two servings.

Graham Veysey, founder of MANCAN, the first exclusive wine-in-a-can company in the US, told Business Insider South Africa that he thinks the future is very promising. “MANCAN has been experiencing serious year-after-year growth with placements at major retailers throughout the US. MANCAN's canned wine products in the US.

Buyers who ‘didn’t get it’ three years ago have come around and now are can evangelists,” he said.

There are now more than 100 canned wine brands in the US, and wine producers in Australia are also getting on board. The Australian brand Innocent Bystander released a canned wine this year, despite their failure to get the same product started in the market five years ago.

“In markets like the USA, wine in cans has seen significant adoption over the last couple of years and I think Australian wine lovers are now ready to get on board. There has been a significant shift in the level of acceptance from the wine trade,” Mat Janes, head of Innocent Bystander, told Business Insider South Africa.

“The main resistance that needs to be overcome, similarly to screwcaps back in the day, is established views around wine packaging. In Australia we love our 750ml bottles and wine drinkers, retailers and on-premise outlets have struggled to adopt new formats for wine.”

South Africa – the seventh biggest wine-producing countries in the world – is a wine-loving country. Last year, we consumed close to 450 million litres of wine.

Of this quantity sold domestically we drank 177m in glass, 149m of bag in box, 62m in plastic and 14m in tetra pack, but just under 380,000l in foil bags. Fruit Beverages and Spirit Coolers are just as popular as wine with 450 million litres consumed annually. That number pales, though, when compared to beer at 3.21 billion litres.

We clearly have a demand for wine, and we are used to drinking from cans, so why hasn’t canned wine taken off in South Africa?

Van Loveren sells their Tangled Tree range in polyethylene terephthalate (PET) bottles and Unplugged Pouches - a portable foil pouch with a tap. “Generally, it’s a difficult sell and the best way to get traction is through aggressive pricing.”

“I think it is about surety, or confidence, in a certain packaging type,” Retief said. “It also shows that the economy is under pressure and consumers do not want spend money on something new for the risk of making a mistake.”

“Bevcan, a division of Nampak, is much stricter these days on allowing a can for production of a wine, due to the risks associated with sulphur decaying the can. They are hesitant to damage their reputation, which is understandable.”

“(Other) barriers include minimum order quantities of 100,000 units per stock keeping unit (SKU) at a time, so you cannot start small and then scale it. Wine based cans are also pricier than beer or cider or ready to drink packaged beverages, so pricing becomes very challenging in a market dominated by a few brands with large marketing spends.”

Local wine expert Cathy Marston, an associate of the Institute of Wines & Spirits and owner of the International Wine Education Centre, told us that canned wine has “huge potential to be popular in South Africa, but it will take time for everyone to get their heads around the idea.”

South Africans still have a conservative attitude towards new wine packaging, she explained, as demonstrated by the perception that wine packaged in plastic bottles and boxes is of a lower quality. Additionally, in order for most wine varietals to be successfully canned, the sugar and acidity content would need to be increased slightly, changing the contents and altering the flavour and wine experience.

“Early adopters would consist of a younger audience, who prefer sweeter wines, and the novelty of the single serve can,” she said.