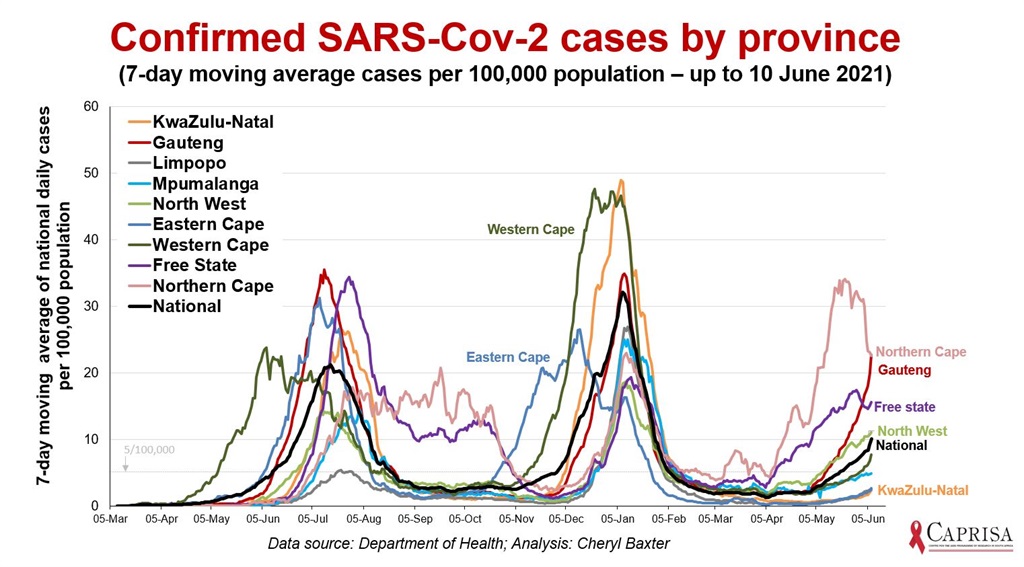 South Africa's third wave of Covid-19 infections is being driven by a surging daily caseload in Gauteng which accounts for 61% of the national total.

South Africa is official experiencing a third wave, as confirmed by the National Institute for Communicable Diseases (NICD) on Thursday evening. The country's active caseload has doubled in less than a month to more than 71,000 by Thursday. The positivity testing rate – which is a key metric used to determine the presence of a new wave – has risen from 9% to nearly 16% during the same period.

The second wave of Covid-19 infections which peaked in South Africa in January was markedly more devastating than the first in 2020. At its height, cases recorded at a seven-day moving average were more than 45% higher during the second wave. The in-hospital case fatality-risk (CFR) grew to almost 30%, with an additional mortality risk of 20% thought to be associated with the new 501Y.V2 variant, according to a study published by the NICD.

Whether the third wave of infections will be as destructive as the second or as muted, in comparison, as the first, cannot be accurately predicted. This is according to Professor Salim Abdool Karim, former co-chairperson of the Covid-19 Ministerial Advisory Committee (MAC) and current director of the Centre for the AIDS Programme of Research in South Africa (CAPRISA). Professor Karim, who guided South Africa's scientific and epidemiological response to the pandemic through the darkest days, says studying the current upward trend in Gauteng and comparing it to the trajectory witnessed during the second wave could provide clues on the third wave's impact and timeline.

"If it [the line representing cases per 100,000 of the population at a seven-day moving] runs in parallel to the second wave's line, we are going to see things going pretty bad in Gauteng over the next week to ten days," Karim told Business Insider South Africa.

"The numbers are going to go up [and] they're going to get to somewhere close to this point [the second wave's peak]. It will take a week or two to get there and then it will start coming down. Now, that's if it follows what happened in the first and second waves but I don't know if it's going to follow that." South Africa last recorded similar positivity rates and cases at a seven-day moving average in mid-December, when the second wave was gaining momentum. The difference then was that infection rates across populous provinces, like Gauteng, KwaZulu-Natal, and the Western Cape were more comparable. This added to the steep surge in the national caseload. This time around, smaller provinces are recording higher caseloads at a quicker rate. "If you look at the Western Cape [now], they are still way behind Gauteng. They are running about three weeks behind," says Karim.

"So, we expect that it will be staggered across the different provinces. The three populous coastal provinces [Western Cape, Eastern Cape, and KwaZulu-Natal] comprise such a large part of our country… when the epidemic starts growing there, that's when you're going to see it take off."

The graphs presented by Karim and compiled by his CAPRISA colleague Cheryl Baxter show how far ahead Gauteng's third wave is compared to the rest of the country. This is with the exception of the Northern Cape, which, according to the data, already reached the peak of its third wave at the end of May and is now on the decline.