China has been dropping hints that it will weaponise its rare earths as a trade war tactic. Here's why it probably won't follow through. Chinese President Xi Jinping visits JL MAG Rare-Earth Company's factory in Ganzhou, eastern China, on May 20, 2019. That visit prompted speculation that Beijing would withhold rare-earth exports to the US in the trade war.
Xinhua/Xie Huanchi via Getty

Over the past week China has dropped numerous hints, via state media editorials and a highly-publicised visit by President Xi to a magnet factory, that it might restrict exports of rare earth materials to the US to retaliate against Washington in their trade war.

Given the US's heavy reliance on the minerals - composed of 17 elements on the periodic table - in its supply chains, such a move could cripple the American tech, defence, and manufacturing industries. Rare earths are crucial to the making of products like batteries, smartphones, electric cars, and cruise missiles.

Read more: China drops heavy hint it is about to pull the trigger on its most powerful weapon in the trade war

But experts don't think Beijing will follow through with those threats. Here's why.

China temporarily cut off rare earth exports to Japan in 2010 amid a maritime dispute that saw a Chinese boat captain captured by Japanese authorities.

Though Japan immediately released the Chinese captain - in what The New York Times described at the time as a "humiliating retreat" - it also started looking into how to wean itself off Chinese exports of rare earths.

For the five to seven years after the Sino-Japanese maritime dispute, Japan started sourcing from rare-earth mines outside China and switching to alternative means of producing its electronics.

Beijing is fully aware that cutting off rare earth supplies to other countries would end up weaning them off its exports, experts say.

Ryan Castilloux, the managing director of rare earth consultancy Adamas Intelligence, told Business Insider: "China recognises that other countries would do that if it weaponises and bans rare earths. They know they shouldn't do that."

Kokichiro Mio, a Chinese economy expert at Japan's NLI Research Institute, also told Agence France-Presse that a Chinese halt on rare-earth exports to the US "would accelerate moves to find alternative supply sources".

China's threat to withhold rare-earth materials from the US is likely just a form of "loud saber-rattling" to get the US to return to negotiations over the yearlong trade war.

"It suggests that China feels its hands are tied, and eyeing the nuclear button that is rare earths," Castilloux said.

Beijing hopes to "instill some more cooperation at the negotiating with the US by hoping the US will back down," he said, adding that China is "using rare earths which they recognise are so integral to US industries."

Washington and Beijing have engaged in a tit-for-tat battle over tariffs over the past two months after US officials accused their Chinese counterparts of reneging on commitments to which they had previously committed.

Read more: China detonated its tentative trade deal with the US by abruptly deleting swaths of text it didn't want to commit to, report says 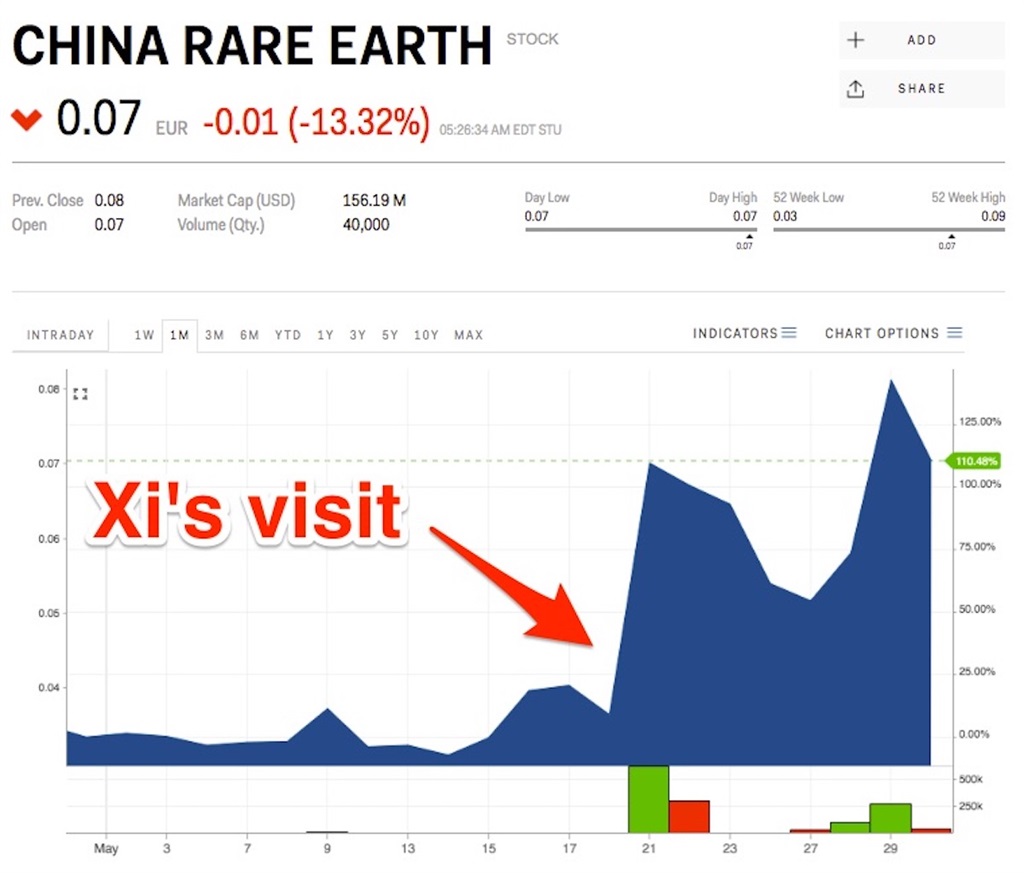 China's recent publicity around its rare-earth industry has already driven up share prices in related companies, and driven up the prices of the commodity.

Brian Menell, the CEO of metal investment group TechMet, told Business Insider: "China will cause some disruption in supply to show that they are serious but will not stop supplying as this is too disruptive and aggressive for the present state of conflict."

"China also does not want a flood of new rare earth investments into non-Chinese sources of supply," he added.

Martin Eales, CEO of Rainbow Rare Earths, believes Beijing could afford to take the plunge, however, because rare-earth exports make up a small amount of China's export balance with the US.

He told Business Insider: "I'm sure it is quite possible for China to do this [withhold rare-earth exports] as part of a wider series of actions linked to any trade war with the US."

"This is certainly a relatively insignificant sum to China in the context of overall trade," Eales said. 'The damage is done'

China's threat to withhold rare earths is already causing the US to explore ways to reduce their dependence on the Chinese exports - such as by developing their own rare-earth sources outside China.

"Even if it [the export ban] doesn't go ahead, it's a wake up call," Castilloux said. "It's causing the US and other countries to take a more serious look into their supply chains."

The Department of Defense on Wednesday said it is seeking new federal funds to support US production of rare-earth minerals to wean the country off its reliance on China, according to Reuters. While there are some rare-earth mines in the US, American manufacturers still largely depend on China.

Bill Bishop, who writes the Sinocism newsletter on Chinese current affairs, tweeted on Wednesday in response to Beijing's editorials on rare earth: "There is no walking back this threat, even if not implemented the damage is done."

Read more: The US-China trade war could slash economic output across the world

For this reason Beijing's halting rare earth exports is "not necessarily a high-confidence, viable plan B right now, as it would take one to several years to establish an entirely standalone supply chain outside China," Castilloux said.

Rainbow Rare Earths CEO Eales, whose company mines in Burundi, said: "The US will need to develop and construct a full processing facility but also have this tailored to a known source of feedstock that can provide a guaranteed long term supply. All of this may take several years."

Menell, the CEO of TechMet, added: "Provided other non-Chinese sources are developed and expanded, it may take five to ten years for the US to wean itself off Chinese supply of rare earths."