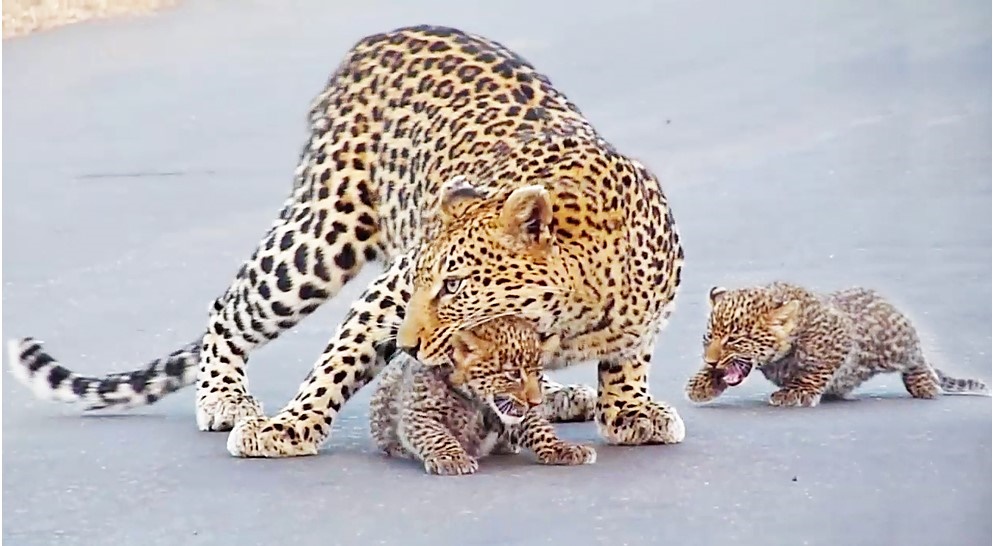 A video of a leopard mom helping her newborn cubs across the road, was released by the popular wildlife website, Latest Sightings, last week. Latest Sightings shares videos captured by visitors to the Kruger Park.

The leopard is seeing nudging her two very small cubs across the road while several cars wait.  One of them loses its way in the process, and gets a firm re-direction from its mother.

The video was captured by a South African family in 2015, but only recently released to the public.

“Early morning, my daughters and I left the camp looking for leopards. They were convinced that there are no leopards in the Kruger, as neither of them had ever seen one.  As we drove, I jokingly convinced them to start singing in the car, to draw the leopards out, and so they did – and to my surprise – it actually worked,”  Thinus Delport (64) told Latest Sightings.

“We hit a traffic jam where a few cars were stationary. It seemed like visitors were looking at a pride of lions. My daughter noticed that in the thicket behind our vehicle, there was a mother leopard trying to move her cubs! It was my daughter’s first visit to the Kruger and she was the first to whip out her video camera. I’m glad she did because I would have been shaking so much from excitement, that the footage might have just been ruined. We stayed and watched as the mother crossed the road first to make sure that all was safe, before returning to encourage her cubs to cross to safety.”

Since the lockdown, the roads are near empty in the Kruger National Park, which recently released pictures of a rarely-seen pride of lions caught napping on the hot tar.

For those who miss the call of the wild during lockdown, many South African game reserves now offer virtual safaris, including Shamwari Private Game Reserve, which will take you on a game drive. There are also livestream webcams available at SanParks reserves.

See also: You can go on a virtual South African safari to spot the 'Big 5' in real-time from your couch

A hyena saving a warthog from a leopard

A warthog almost ended up as a leopard snack, until a hyena gate-crashed the party.

A baboon grooming a lion cub

Troops of baboons have been known to kill young leopards and even a lion, but in this never-before-seen moment, a single male baboon stole a lion cub and started grooming it.

A hippo tries to rescue a baby kudu

The baby kudu unfortunately did not survive.

An elephant tramples a rhino and its baby

An elephant turns on a rhino and her baby that are taking up space at the local waterhole.

A leopard escapes pride of lions

A male leopard plays dead to escape, after being surrounded by a pride of lions.

A night-time tussle between a hippo and rhinos

This is what happens when two of Africa’s heavyweights go head-to-head.

Half an impala tries to escape a hyena (warning: graphic content)

This video shows how determined impalas are to survive. (Warning:  graphic content.)

A wild dog manages to escape the jaws of a lioness after playing dead.

A male lion rudely wakes up a female, only to get called out on it

A herd rescues a buffalo trapped between a pride of lions and a dam filled with crocodiles.

An old buffalo bull was caught between a pride of lions and a dam filled with crocodiles, his herd came to the rescue.

A martial eagle swoops in to grab a warthog piglet. Warning graphic content.

Related Links
TAKE A LOOK: Rare sighting of Cape fox family on wine farm
Eye-popping videos of SA wildlife - including a buffalo's lucky escape and a hippo clashing with...
You can go on a virtual South African safari to spot the 'Big 5' in real-time from your couch
Next on Business Insider
Qantas CEO's $19 million mansion pelted with eggs and toilet paper amid travel chaos, report says

Read more on:
wildlifeanimalswfhwork from homecovid-19