The Buzludzha Monument in Bulgaria is one such project.
NurPhoto / Getty

Not every business move is the smartest decision, especially when it comes to real estate.

Across the world, people have built truly wild homes, hotels, and resorts that are no longer in use and are now abandoned. Whether it be for economic, financial, or unexplained reasons, these truly bizarre places became dilapidated monuments that hint at their former, unique selves.

Here are some of the best out-of-the-ordinary structures that were left in ruins.

In 1987, North Korea built a 107-story pyramid tower in its capital city, but it has remained abandoned for decades. Unfinished Ryugyong Hotel.
Anthony Asael/ Art in All of Us/ Getty

The building was meant to be a hotel, but it has never welcomed a single guest. The Ryugyong Hotel remains dark in the Pyongyang skyline, except for the light atop of the pyramidwhich warns airplanes of its existence. The hotel was only supposed to take two years to build, but construction drew on for many years. When the Soviet Union collapsed in 1991, North Korea entered an economic crisis, halting construction entirely. The building remained a concrete eyesore until 2008 when the country started working on the its exterior. But the inside still remains closed to the public.

Eerily, the building's exterior has been lit up and used to display North Korean propaganda. Propaganda lit up on the Ryugyong Hotel.
Ed Jones/ Getty

In 2018, the North Korean government turned the building into a light show. With 100,000 LED lights, the building's outsidelit up with images of political leaders, events, and monuments. The inside of the hotel remained dark.

The Bulgarian Communist Party built a monstrous headquarters on top of a mountain in 1981, and it resembles a flying saucer. The headquarters sits atop the Buzludzha mountain peak, located in the middle of Bulgaria. The saucer-like structure is formally known as the Buzludzha Monument.

In 1989, however, Bulgaria started transitioning from communism to a democracy, and the communist headquarters were abandoned. It has laid in ruin for decades.

The site remains closed to the public, but vandals often get inside to explore the abandoned building. 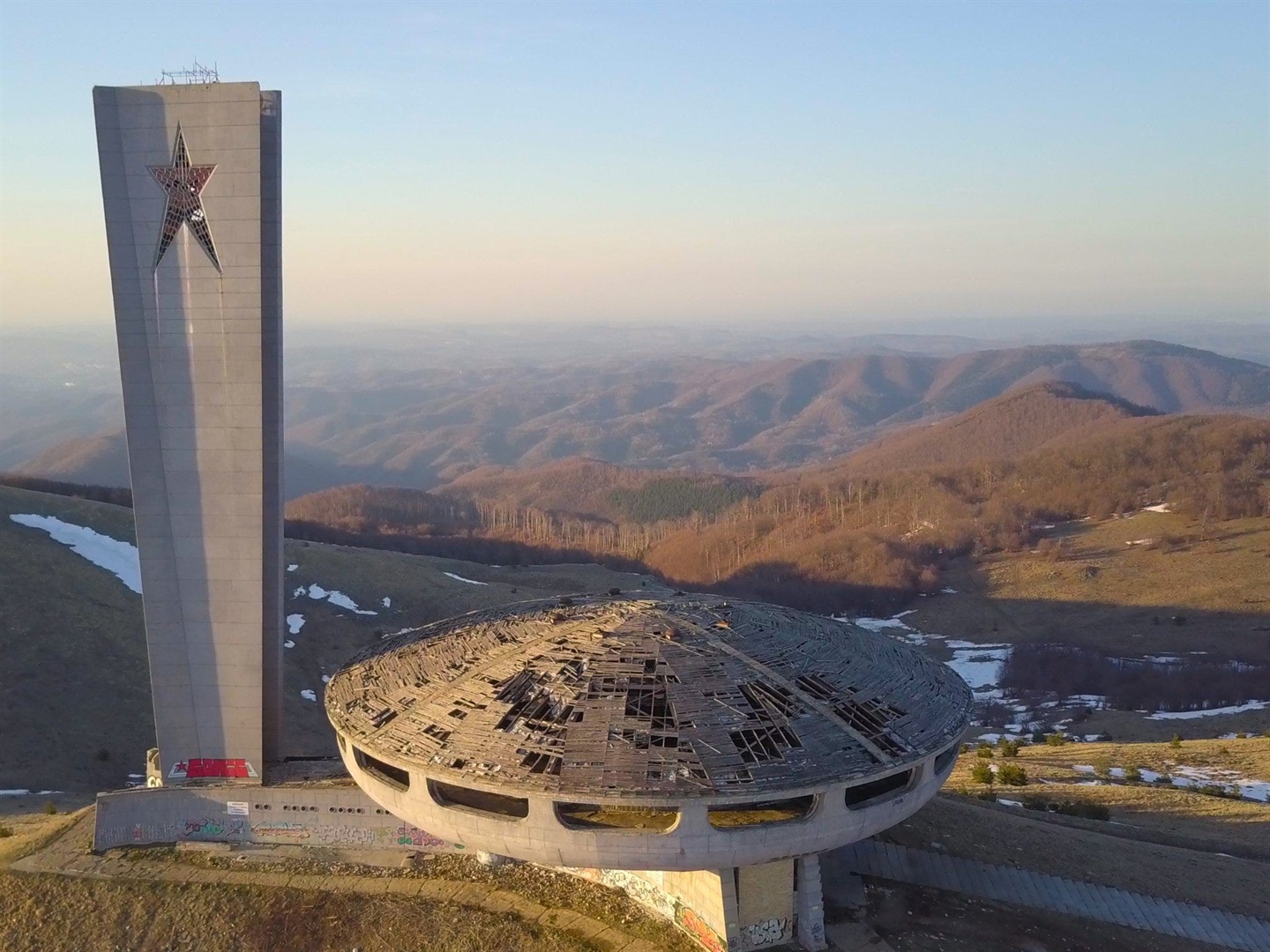 The concrete building still stands today,prompting many people to break in and vandalise the structure.

Built in 1978, the Sanzhi Pod City was meant to be a seaside resort for the US military in Taiwan. Each pod in the city was built to resemble UFOs.

The city was never opened because of investment losses in 1980.

Others believe various conspiracy theories explain its abandonment. Since many construction workers died by suicide while building the pods, some people believe the city is haunted. Some think there is a Dutch graveyard beneath the buildings, causing the hauntings.

The city decayed and remained untouched for years until it was demolished in 2010.

In Turkey, a strange community of mini castles were built for the wealthy, but it has remained abandoned for years. In 2014, a developer started building villas that resembled miniature castles. The community called Burj Al Babas sits at the base of Turkey's northwest mountains in the town of Mudurnu. Each home is identical to the other, with blue, intricate roofs and towers fit for a princess. There were more than 732 villas within the community, and 350 were sold to wealthy Arab investors, Business Insider previously reported.

But many buyers pulled out of the deal when Turkey experienced an economic recession, leaving the town abandoned. Each villa is exactly the same.
Adem Altan/AFP/Getty Images

The developers filed for bankruptcy protection when its buyers pulled out of their deals. Political turmoil, higher inflation rates, and the decline in oil prices all contributed to the downfall of this community. The Burj Al Babas hopes to open again.

The Greek government spent a large sum of money to build elaborate venues for the 2004 Olympics in Athens, but the buildings were abandoned after the games. It's not unusual for Olympic stadiums and venues to become abandoned, but Athens' venues are especially noteworthy because the country went $15 billion over budget. The country simply had no use for its larger investments like the Olympic swimming pool and baseball stadium.

The struggle of finding a use for Olympic venues after the games' end is not uncommon for host cities all over the world.

Related Links
WATCH: A black Labrador named Max drove doughnuts alone in a car, then jumped out, wagging his tail
14 massive projects planned for SA – including a space hub and a new Gauteng city
Incredible photos of natural wonders that look Photoshopped but aren't
Next on Business Insider
Russia moves to stop foreigners from using the services of its surrogate mothers