1. Budget week! On Wednesday, finance minister Tito Mboweni will give his maiden budget speech in a tough environment. Tax income is tight, spending pressures are growing and Eskom is staring into the abyss.

Last week, the rand lost more than 3% amid growing concerns about loadshedding and South Africa’s prospects. Public Enterprises Minister Pravin Gordhan is awaiting a new report on Eskom, which should be released in the next two weeks. The rand was last trading at R14.07/$.

2. Ajay Gupta, one of the brothers at the centre of state capture allegations, is no longer a fugitive from justice in South Africa after a warrant for his arrest was cancelled. Gupta was wanted for corruption. The Hawks said it was an inevitable legal consequence of the provisional withdrawal of charges against former president Jacob Zuma in January.

3. Former Director General Lungisa Fuzile – now Standard Bank CEO – will appear again at the Zondo state capture commission today. Last year, he testified that the ANC head of economic transformation Enoch Godongwana told him he was getting a “a Gupta minister (a reference to Des van Rooyen), who will arrive with advisors".

4. More grim news from the coalface expected as more companies release results this week. Woolworths, Truworths and Bidcorp will publish their financials, along with Anglo American, BHP Billiton and Sibanye Stillwater.

5. The embattled Grand Parade Investments, which owns the licence for Burger King in South Africa, will close local outlets of Dunkin’ Donuts and Baskin-Robbins after failing to sell them.

All over the world, people have built truly wild homes, hotels, and resorts that are no longer in use and now abandoned. Whether it be for economic, financial, or unexplained reasons, these truly bizarre places have now become dilapidated monuments that hint at their former, unique selves.

Keep reading to see some of the best out-of-the-box structures left in ruins.

The Sutyagin House is often considered one of the tallest wooden houses in the world. Entrepreneur Nikolai Petrovich Sutyagin started building the large wooden home in 1992, and it reached 144 feet with 13 stories. It took over 15 years to build the structure in Arkhangelsk, Russia. At its completion, some called it the "eighth wonder of the world."

Sutyagin said the impressive height of the house was a "happy accident." "First I added three floors but then the house looked ungainly, like a mushroom," Sutyagin told the Daily Telegraph in an interview. "So I added another and it still didn't look right so I kept going. What you see today is a happy accident."

When Sutyagin was in prison for racketeering, the house remained abandoned and began to fall apart. While the house was abandoned for years, it was eventually deemed a fire risk. Parts of the home were taken down in 2009 to reduce the risk. However, what was left was actually destroyed in a fire in 2012.

The Sanzhi Pod City — built in 1978 — was meant to be a seaside resort for the US military in Taiwan. Each pod in the city was built to resemble UFOs, becoming a town of the future.

The city was never opened because of investment losses in 1980. Others believe various conspiracy theories explain its abandonment. Since many construction workers committed suicide while building the pods, people believe the city is haunted. Some think there is a Dutch graveyard beneath the buildings, causing a supernatural haunting.

The seemingly haunted city decayed and remained untouched for years until it was demolished in 2010. No one has learned the truth about what really happened in Sanzhi Pod City.

The Bulgarian Communist Party built a monstrous headquarters on top of a mountain in 1981, and it resembles a flying saucer. The headquarters sits atop the Buzludzha mountain peak, located in the middle of Bulgaria. The saucer-like structure is formally known as the Buzludzha Monument.

In 1989, however, Bulgaria shifted to democracy and abandoned the communist headquarters. It has laid in ruins for decades as a monument to a failed past.

The site remains closed to the public, but vandals often get inside to explore the abandoned building. The concrete building still stands today, prompting many people to break in and vandalize the structure.

In 1987, North Korea built a 107-story pyramid tower in its capital city, but it has remained abandoned for decades. Anthony Asael/ Art in All of Us/ Getty

The building was meant to be a hotel, but it has never welcomed a single guest. The Ryugyong Hotel remains dark in the Pyongyang skyline, except for the light atop of the pyramid which warns airplanes of its existence.

The Ryugyong Hotel is now the tallest unoccupied building in the world despite getting a face lift. The hotel was only supposed to take two years to build, but construction drew on for many years. When the Soviet Union collapsed in 1991, North Korea entered an economic crisis, halting construction entirely. The building remained a concrete eyesore until 2008 when the country started working on the its exterior. But the inside still remains closed to the public.

Eerily, the building's exterior has been lit up and used for North Korean propaganda. 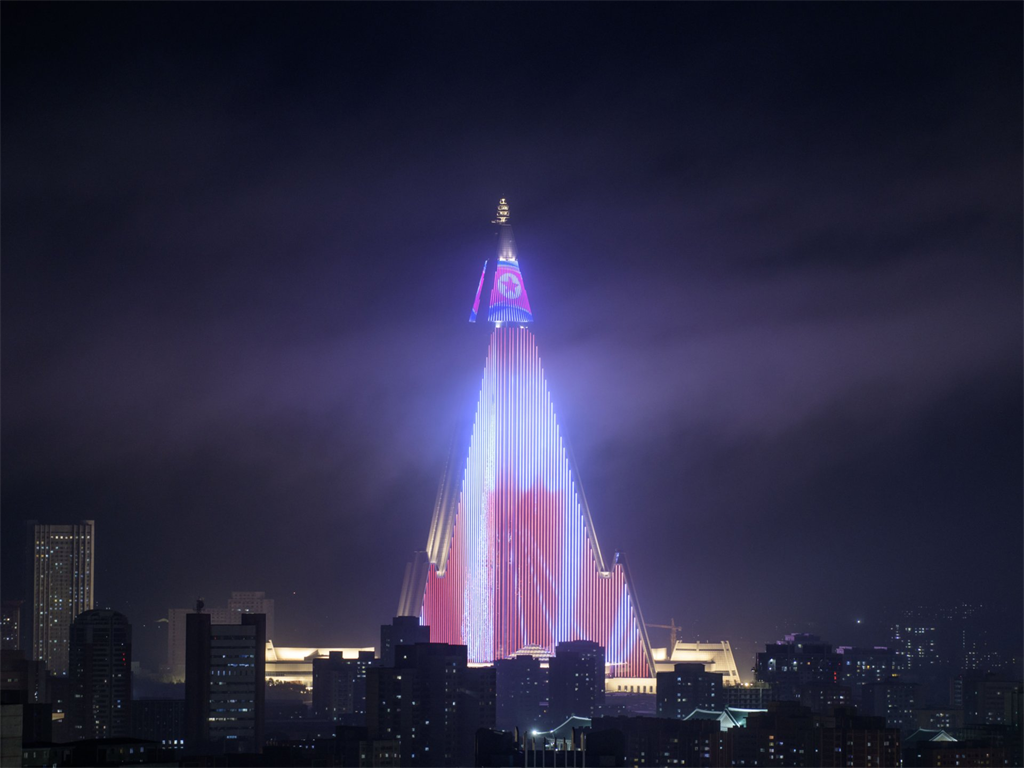 In 2018, the North Korean government turned the building into a light show. With 100,000 LED lights, the building's outside lit up with images of political leaders, events, and monuments. The inside of the hotel remained dark.

Meanwhile, in Turkey, a strange community of mini castles were built for the wealthy but has remained abandoned for years. In 2014, a developer started building villas that resembled miniature castles. The community - called Burj Al Babas - sits at the base of Turkey's northwest mountains in the town of Mudurnu. Each home is identical to the other, with blue, intricate roofs and towers fit for a princess. There were more than 732 villas within the community, and 350 were sold to wealthy Arab investors.

But many buyers pulled out of the deal when Turkey experienced an economic recession, leaving the town abandoned. The developer company filed for bankruptcy protection when all of its buyers pulled out of their deals. Political turmoil, higher inflation rates, and the decline in oil prices all contributed to the downfall of this community. The Burj Al Babas hopes to open again in late 2019.

On a grander scale, the Greek government spent a large sum of money to build elaborate venues for the 2004 Olympic games in Athens, but now all the buildings are abandoned. 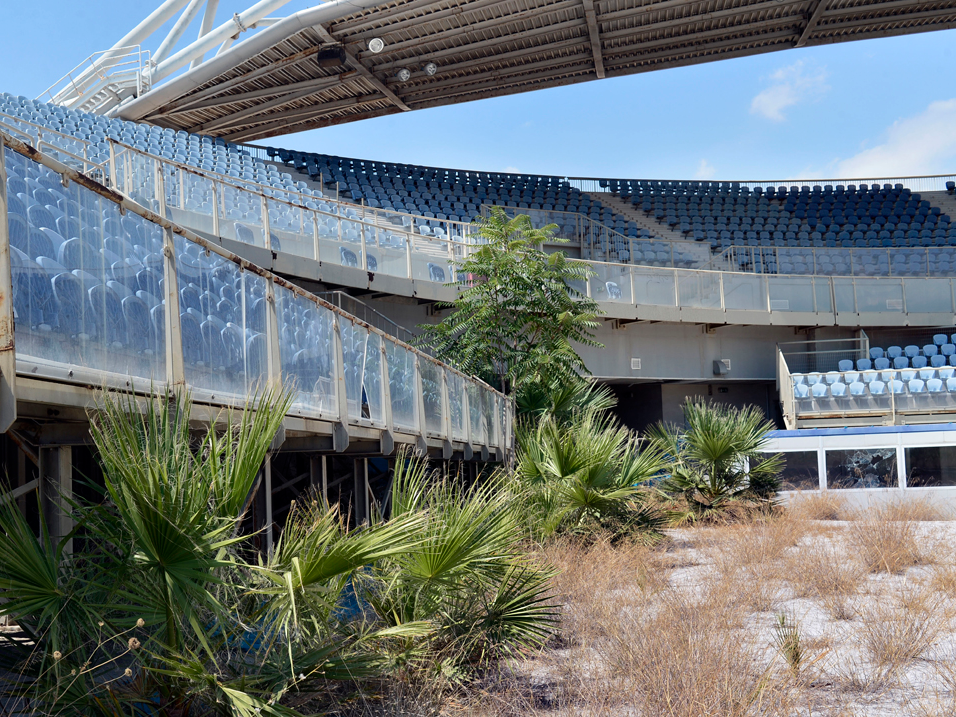 It's not unusual for Olympic stadiums and venues to become abandoned after the games. But, Athens' venues - which now lie in ruin - are especially noteworthy because the country went $15 billion over budget. The country simply had no use for its larger investments like the Olympic swimming pool and baseball stadium.