WILD VIDEO: Vultures fight off a cheetah, but then a lion enters the battle 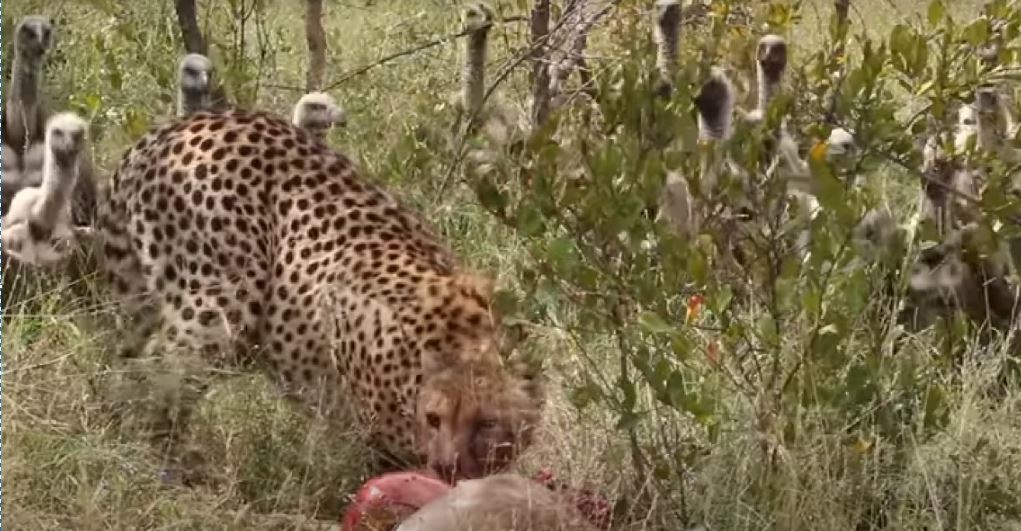 A wild video of a battle between a cheetah, a large group of vultures and a lion has just been released by popular wildlife website Latest Sightings, which shares videos from visitors to South Africa's game reserves.

The video was captured last week by Brett Heasman, a ranger and guide from Sabi Sabi Bush Lodge, on the western side of the Kruger National Park.

He says that a cheetah took down an impala in an open area close to the main lodge.

The video shows how the cheetah repeatedly tries to scare the vultures away, but finally gives up his kill to the insistent horde.

“We sat in awe, watching the vultures scurry and feast while the cheetah disappeared into the thicket. Within a few seconds it was chaos, vultures were scattering in a panic and we could not understand what was happening,” Heasman says.

Then, a young male lion comes rushing in, pounces on the vultures and claims the impala for himself.

Heasman says the scene was “incredible”. “What a war for a meal!”

The lion then dragged the kill off to a more shielded area, while the cheetah rested a little distance away.

For those who miss the call of the wild during lockdown, many South African game reserves now offer virtual safaris, including Shamwari Private Game Reserve, which will take you on a game drive.

See also: You can go on a virtual South African safari to spot the 'Big 5' in real-time from your couch

There are also livestream webcams at SanParks reserves, and at other places around South Africa.

Since the lockdown, the roads are near empty in the Kruger National Park, which recently released pictures of a rarely-seen pride of lions caught napping on the hot tar.