An A-10 Thunderbolt II attack aircraft with shark teeth nose art at Kandahar Airfield in Afghanistan.
US Air Force

There are the ordinary A-10 Thunderbolt II attack aircraft, and then there are what one US Air Force squadron commander called "the coolest looking A-10s." Those planes are the ones rocking the ferocious shark teeth war paint, he said.

"It's not just any A-10s that have the shark teeth," Lieutenant-Colonel Matthew Shelly, an experienced A-10 pilot and the commander of the 74th Fighter Squadron, told Insider. "It's only the 23rd Fighter Group at Moody Air Force Base" in Georgia.

"There are other A-10 units that have nose art, but not the iconic shark face," he said.

For instance, the Air Force Reserve's 442nd Fighter Wing at Whiteman Air Force Base in Missouri gave their A-10s Warthog teeth with tusks in 2015 after an aircraft structural maintenance technician asked, "Why don't ours have teeth?" Aircraft 79-123 was the first A-10 Thunderbolt II flying out of the 442nd Fighter Wing at Whiteman Air Force Base, Mo., to receive teeth.
US Air Force

The iconic shark's mouth paint job is unique to the active-duty Air Force's 23rd Fighter Group because it is directly tied to the group's history and heritage. 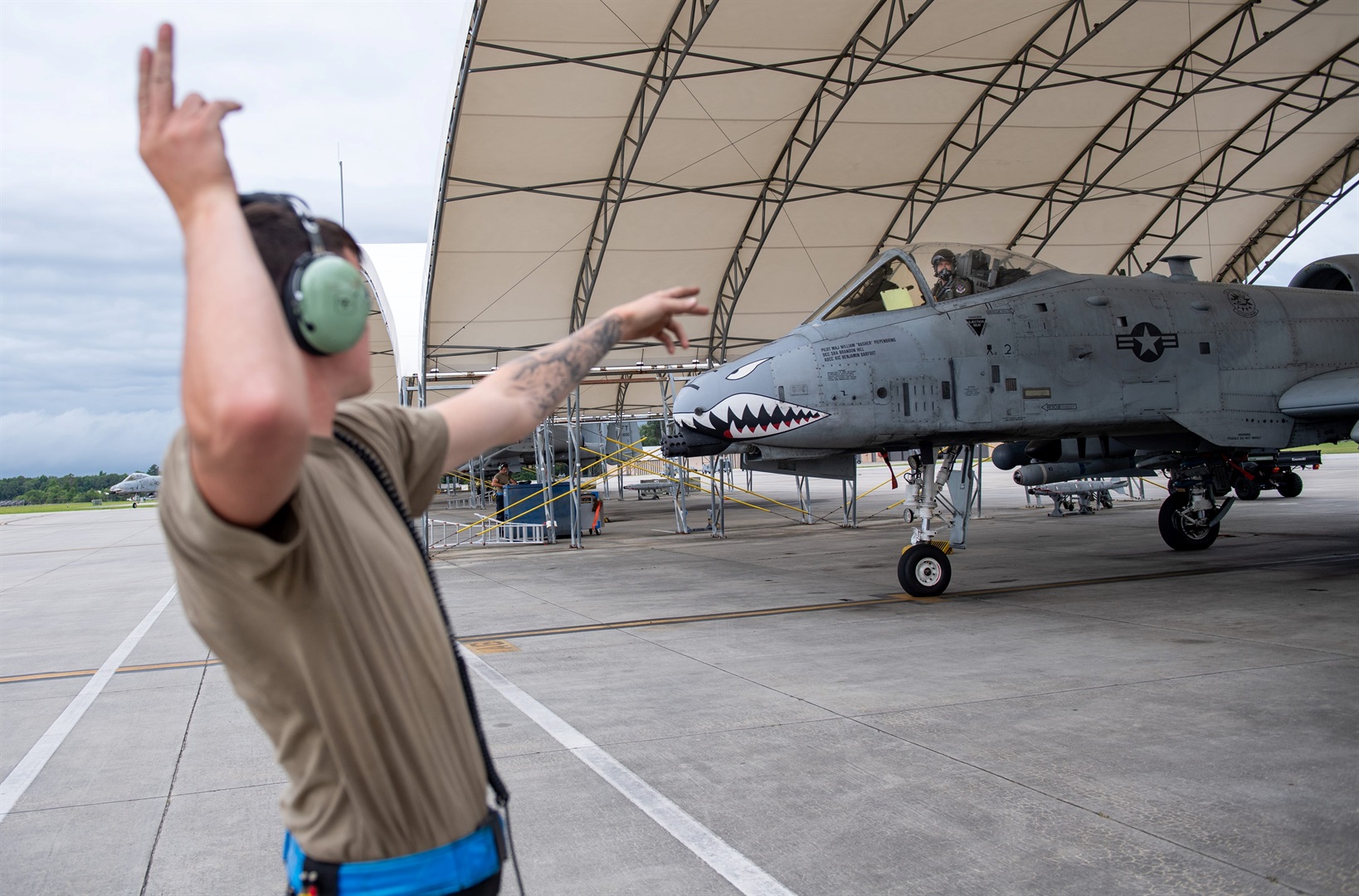 For many of World War II's combatants, the conflict was something of a golden age for military aircraft art. The designs ranged from teeth to pin-up models to cartoon characters.

The intake on the Curtiss P-40, an Allied fighter and ground-attack aircraft, lent itself to a shark mouth design.

The first P-40s to feature the shark mouth war paint were the British Royal Air Force Tomahawks. The design was later adopted by the Americans and featured on US P-40s, which were known as Warhawks.

For the Americans, the shark art "started in the American Volunteer Group, which eventually became the 23rd Fighter Group," Shelly said. A P-40 Warhawk painted in the colors of the American Volunteer Group (Flying Tigers) at a 2018 air show.
US Air Force photo by Master Sgt. Mark C. Olsen

The First American Volunteer Group, which was commanded by Claire Chennault, is more famously known as the "Flying Tigers."

The group, which defended China against the Japanese, was activated prior to America's entry into World War II and saw combat shortly after the US declared war on Japan.

The group was organised into the Chinese air force and flew under the flag of the Republic of China. It was only active for about a year before it was disbanded, but in that time, it destroyed 297 enemy aircraft, according to the US Air Force.

Their actions made them legends. "They did that with P-40 aircraft," Shelly said. And, "when you look at the P-40 aircraft from World War II, almost all the pictures that you look at have a shark face on it," he added. A P-40 Warhawk painted in the colors of the American Volunteer Group (Flying Tigers) at a 2018 air show.
US Air Force photo by Master Sgt. Mark C. Olsen

After the First American Volunteer Group was disbanded in summer 1942, the 23rd Fighter Group, which was established as the 23rd Pursuit Group (Interceptor) of the US Army Air Forces, took in some officers, pilots, and maintainers from the group and took over its nickname and its mission in the China-Burma-India area of operations.

The 23rd Fighter Group consisted of the 74th, 75th, and 76th Fighter Squadrons and was a component of the China Air Task Force overseen by Chennault and later the Fourteenth Air Force.

Those "squadrons are now here at Moody," Shelly explained. "We all trace our lineage back to the American Volunteer Group in World War II that had shark teeth on their airplanes."

The 74th and 75th Fighter Squadrons are still part of the 23rd Fighter Group while the 76th is now a Reserve unit with 476th Fighter Group, though all are A-10 squadrons at Moody.

The A-10 Thunderbolt II attack aircraft is commonly called the "Warthog" and is a dedicated close air support aircraft that was first introduced in the 1970s.

Beyond the fearsome nose art on a number of the attack aircraft, the A-10 is also famous for its powerful seven-barrel 30mm GAU-8 Avenger cannon and the thundering "BRRRRRRRRT" noise of continuous fire it makes.

The aircraft is basically a flying cannon with wings, and Shelly recently told Insider what it was like to fire the cannon, saying it is "the coolest thing I've ever done in an airplane."