Why global markets are collapsing right now, and who you should blame for it

Markets are falling all over the world, but this should not come as a surprise.

A major correction in the asset markets has been building for a while. There have been 10 years of economic growth since the great financial crisis of 2008 and a bull market in stocks of pretty much the same length. That's a long time in terms of economic cycles, and we were overdue for a "reversion to the mean," as statisticians say.

But it is not merely the case of the pendulum naturally swinging back. Eleven factors have distorted global markets over the past few years, priming the global economy for a sharp pullback.

Here is who you should blame if this correction turns into a full-blown rout or - worst-case scenario - a recession:

America voted for a race to the bottom in US President Donald Trump's trade strategy.

Putting up barriers to competing foreign goods, and taxing the services of other countries, may feel great in the short run. Who doesn't want to protect the workers at home from their cheaper competitors abroad? But in the long run it means domestic production becomes more expensive, imports become more expensive, inflation goes up, less trade gets done in global aggregate, and investors reduce their expectations - and their actual investments - for the future. The global pie gets smaller, and markets are finally reacting to that.

2. The Chinese government and its love of theft

The trade war didn't come from nowhere. Trump is angry for a reason. For years, China has allowed its companies to steal Western technology and to rip off Western intellectual property. For years, the West did nothing about it. Finally, the Trump administration has gone to war against China for its flouting of international trade norms. Now we are living with the result.

3. The Chinese government and its love of debt Chinese debt of all types is nearly 320% of its gross domestic product, according to Pantheon Macroeconomics. At the same time, its GDP growth has slowed. For years, the Chinese government allowed its state agencies and supported industries to take on cheap loans to fuel growth. That produced an economic miracle that has propelled the Chinese economy into the most important on the planet.

But debt is debt. It doesn't go away. Someone either has to pay it (and become poorer) or suffer a default (and become poorer). Debt merely pushes problems into the future. As Chinese debt rose, the growth it got from that debt has declined. So now the country is stuck with a slowing economy but a much larger debt pile than it had 10 years ago. Investors don't like what they see, and Asian stocks are hurting as a result. 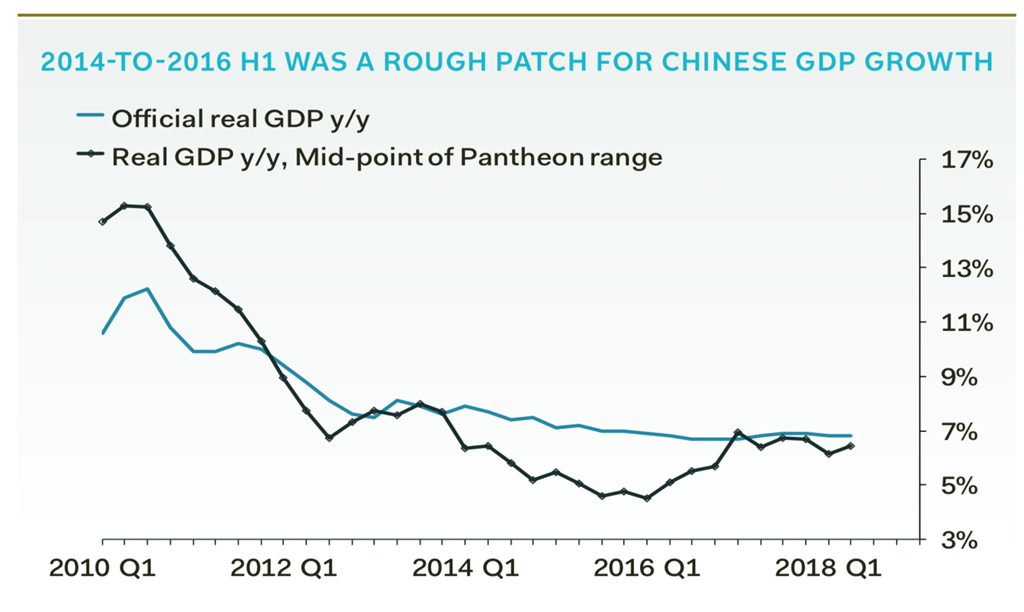 SoftBank, the vast Japanese venture-capital investor, wants to invest $50 billion a year mostly in tech startups. It intends to raise $100 billion every few years on a rolling basis to do this. Ten years ago, it was considered a big deal if a startup in San Francisco or London received a $10 million investment. Now, companies struggle to generate headlines unless they are receiving cash injections in the hundreds of millions.

To sustain and justify these investments, company valuations have gone through the roof. There are more "unicorns" - private tech companies worth at least $1 billion - than can be counted.

The problem is that this is all occurring in the private market. It is difficult for outsiders to get information about these companies. Are they successful? Are they profitable? Are they growing? Do their business models make sense when scrutinised in the light of day (case study: Tesla)?

VC-funded companies sustain their valuations because VCs tell us they are valuable. The market for privately held equity is illiquid and opaque. This works just fine in a market that is rising. But in a downturn it will be very difficult to sell some of these stakes. So a lot of money from the large institutions - banks, retirement funds - is tied up in illiquid VC investments. Good luck, everyone!

5. Private equity: Leveraged loans are recreating the junk-bond crisis of the early 1990s The Bank of International Settlements

The global total of "leveraged loans" has reached about $2.5 trillion. The Bank of International Settlements is worried about them. The Bank of England is worried about them. Credit Suisse recently wrote a letter to its clients defending its investments in them. Yet few normal people - those outside the world of finance geeks - know what they are.

Basically, it's high-risk, low-quality debt. As central banks have held interest rates near zero for years, private equity has been on the hunt for investments with much higher interest rates. But higher rates come with higher risks.

A typical example of a leveraged loan looks like this: A PE firm finds a company that is already carrying debt but is still in trouble. Perhaps it is an old company that has been badly run. It is in need of restructuring, and it may succeed if you can inject a bit of cash. So the PE firm partners with a bank, which arranges a loan, underwrites the loan, and maybe packages it with a bond. The PE firm then bundles that with its own money and takes over the firm. At this point it restructures the company, which is a polite way of saying it lays off a lot of workers, ousts the incumbent management, and sells off the useless bits. After a while, the PE firm finds itself in charge of a smaller but more functional company that has a future ahead of it. So it sells the company, or floats it with an initial public offering. In the sale, the PE company gets rich and the bank gets back its loan.

The problem with leveraged loans is that they have a low credit rating, and the rating resets - downward - if interest rates go up. And interest rates are going up. A lot of investors automatically sell their debt holdings when they get downrated - so this is a pile of $2.5 trillion in high-risk debt resting on a series of negative rating triggers.

6. You and your addiction to ETFs: Mindless buying has created a boom in stocks based on momentum, not fundamentals You probably have a retirement fund, like a 401(k) in the US or a private pension fund in the UK. And inside that savings account, you are probably pouring a percentage of your salary every month into an exchange-traded fund, which is an investment that simply tracks a major market index like the S&P 500.

They are good investments. Most "active" fund managers fail to beat the market each year, so an ETF guarantees that your return is the same as the market's. For years, the market has been good. The more good it is, the more people pile into ETFs. It's a boom based on momentum, and no one who owns an ETF actually examines the stocks inside it for their fundamental flaws or values.

Booms come to an end, of course, and momentum can reverse. We may be seeing that now.

7. The US Federal Reserve, which was warned against misreading the bond yield curve

The bond yield curve is an infamous predictor of recessions. If it inverts - meaning that if the yield on the two-year Treasury note rises above the yield on the 10-year note - recessions often follow, as such an inversion suggests that investors are very worried about the near-term economy. But US Federal Reserve Chairman Jerome Powell said recently that the flattening curve was less important than the neutral rate of interest. Many serious people believe that is a mistake or at least a version of "this time it's different." The yield curve has trended toward an inversion, and a lot of people think the Fed is misreading that signal.

8. Italy, for failing to reform its politics or its banks

Italy is the third-largest economy in Europe and the ninth-largest globally, and yet it's a basket case. Its bank system is riddled with sketchy debts. And the Italian economy is not growing fast enough to solve its problems.

Its government is on a fiscal collision course with the European Union. The EU wants to force it to set a budget that its elected government does not want. It cannot extract itself from the euro currency system without defaulting. And its people have refused to vote for reforms to their electoral system that may end the country's infamously sclerotic governance.

Italy is shuffling toward a crisis, and it has neither the will nor the ability to change course. On its own, that's not a huge problem. But in times like these, it's just another layer of uncertainty telling investors to flee. 9. Britain: Brexit has left the world's 5th-largest economy without a plan

The UK is the fifth-largest economy on the planet and yet it does not have a functional economic or trade plan for after March 2019, when its break from the EU is due.

You can blame the individual, idiosyncratic governments of all these emerging-market countries for their economic crises, but that would be like blaming the trees for being in the woods. The underlying fact is that all these EM countries took on big US-dollar-denominated debts for inward investment purposes, and as the US Fed has strengthened the dollar those debts are now onerously expensive.

Currency crises don't come from nowhere. In the short term, it's bad for each individual country. But in the long term it's bad for the US and the West too. EM countries grow faster than the developed economies, and if that growth disappears, then that will slow down the larger economies too.

Every extra dollar spent burning oil is a dollar not being put to better use elsewhere. Oil price rises contribute to inflation, too. Brent crude is over $81 a barrel, and that will cut economic growth, according to Louis Mullen and Gabriel Sterne, analysts at Oxford Economics.

They told clients Thursday morning: "We estimate that their rise since mid-2017 will reduce global GDP growth by 0.2ppts this year, compared to a scenario in which oil prices remain at $50pb after mid-2017. It could get worse. Should Brent continue to $100pb, our simulations show further cuts to global GDP growth by an average of 0.3ppts relative to our baseline in 2019 and 2020."