Inside the rise of Nikocado Avocado, the extreme-eating YouTuber whose meltdown is rocking an online community Nicholas Perry, known as Nikocado Avocado to his 3 million YouTube subscribers, has made a name for himself in the extreme-eating vlogger community.

Since 2016, Perry's consumption of entire fast-food menus (often accompanied by his pet parrot) has captured the rapt attention of a YouTube audience. He is known as a mukbanger, someone who posts videos of themselves eating or bingeing large amounts of food online.

The 27-year-old, who posts a video almost every day, has recently garnered attention for his month-long feud with fellow YouTubers who accused him of abusive behavior during a collaboration video. Perry's controversial response videos in the wake of the accusation have subscribers - and an entire YouTube community - concerned.

Here's everything you need to know about Nikocado Avocado.

Nicholas Perry was born on May 19, 1992, in Ukraine. He said he was adopted shortly thereafter and grew up in Harrisburg, Pennsylvania. The vlogger told YouTuber Trisha Paytas that he learned of his adoption early on and struggled to make sense of his biological parents' decision. As a result, he said he acted out and received mental health interventions as a child.

"I was in and out of therapy since I was, like, 5 [years old]," Perry told his fellow mukbanger in a 2019 interview for Paytas' podcast The Dish With Trish.

"I would just, like, always want attention," he said. "I wanted the spotlight."

Perry also told Paytas that he'd been prescribed antidepressants when he was 7 years old. Later, as a preteen, he said, he was diagnosed with ADD (Attention Deficit Disorder) and OCD (Obsessive-Compulsive Disorder).

Before the YouTube star's online career began, he planned on pursuing music. On Paytas' podcast, the vlogger opened up about his pre-YouTube career working as a freelance violinist. Living in New York at age 21, Perry had dreams of playing in the pit orchestra for a Broadway show.

While he had the musical talent, he explained, it was difficult to make a living in a city of talented and competitive musicians.

"I was just a small, little fish in a huge sea," he said. According to a video Perry posted in 2016, the pair first met in a Facebook group for vegan men.

After several months of communication, the two met up in New York when Home made the trip up from Colombia for the Woodstock fruit festival.

The two began as friends (although Perry arrived for their first meeting wearing a tuxedo to serenade Home) but their relationship evolved after they travelled together in central America, Home said.

Perry began posting YouTube videos in 2014 as a vegan vlogger.

Before he was known for videos of consuming entire fast-food menus, the YouTuber frequently filmed videos about his vegan lifestyle.

Perry posted a video in 2016 explaining why he no longer wanted to be a vegan YouTuber, citing his changing beliefs about consuming animal products and his frustration with the "vegan community."

Years later, Perry opened up to Trisha Paytas about the effect he believes veganism had on his health.

"I had a rotted tooth, a vitamin B-12 deficiency, and I developed hypoglycemia," he told the YouTuber on her podcast. "I don't know if it was directly related to veganism, but I'd never had it before."

After leaving veganism behind, Perry made a name for himself in the mukbang community. Mukbang videos, first popularized in South Korea in 2010, usually consist of a host eating a large amount of food while communicating with an audience. The word mukbang is a combination of the Korean words for "eating" and "broadcast."

Perry became one of the first American men to partake in the extreme-eating trend, as mukbang videos at the time were dominated by women. "Junk food has made me crazy. I have episodes of manic where like, everything seems really hard for me, " the YouTuber told Trisha Paytas. "I'm like a tornado."

Perry frequently posts videos with thumbnail images of himself sobbing into trays of food. Some titles include "nobody likes me, i'm done" and "my life is falling apart."

Perry said that he's always been dramatic and chooses to take advantage of his low moments for YouTube success.

"I'm just like 'well, fuck it, everyone already hates' me or 'I'm already dramatic, lemme just grab the camera and film it,'" he explained.

He went on to acknowledge in the podcast that his emotionally turbulent videos generate the highest number of views.

Perry's latest YouTube drama escalated in December 2019 when another mukbanger accused him of abusive behaviour. In a video posted to Perry's channel in December 2019, the YouTuber collaborated with mukbangers Stephanie Soo and Zach Choi. In the clip, the three vloggers joked with each other while consuming a massive quantity of spicy noodles.

Four days after Perry posted the collaboration, Soo posted a video titled "Why I Am Scared Of Nikocado Avocado," in which she described feeling unsafe with Perry in the past and while filming the collaboration. Soo also accused Perry of sending her harassing texts and taking photos from inside her home when she briefly left the room. Within hours, the video received hundreds of thousands of views (and has reached nearly 10 million views at the time of this post).

Soo's allegations against Perry spurred a series of increasingly lengthy back-and-forth videos between the two, who produced text messages and video footage to refute each other's claims.

The videos have received millions of views and the comments sections are flooded with support for Soo and disdain for Perry.

"You are such a horrible, toxic person. You deserve none of the success you've had," one commenter wrote on Perry's page.

Amid the deluge of YouTube comments and Reddit speculation about the feud, mukbangers weighed in the controversy. Mukbanger Bethany Gaskin, known as BLovesLife to her 2.5 million subscribers, posted an hour-long video to her channel in the wake of the feud.

"Just my two cents over homemade chili," she captioned the video, in which she recalled her positive experiences collaborating with both Perry and Soo, but ultimately sided with Soo.

Zach Choi, who joined Perry and Soo for the collaboration video, revealed in an Instagram story that he had hired legal representation to address the claims Perry made on social media.

"For those of you waiting for a response to @nikocadoavocado continued harassment, I have retained an attorney and he will be handling these matters going forward," he wrote.

Perry's recent videos recapping the aftermath of the feud have subscribers concerned for his mental health. In a recent video titled "We Broke Up," a visibly-distraught Perry blamed the negative comments and YouTube drama for the demise of his relationship with his husband.

"All of your comments over the last month are seeping into his head and he is questioning us as a couple," he said. "And it's all because of YouTube."

In another video titled "Orlin left me, I hate myself, Goodbye youtube & life," one of seven videos Perry uploaded within the week, the YouTuber sobbed while discussing his breakup and his desire to quit vlogging (while consuming vast quantities of Taco Bell).

The comments section of the video, which has been viewed 425,000 times at the time of this story, is filled with subscribers noting the escalation from Perry's typical YouTube theatrics and concerned for his mental health.

"This isn't even funny or entertaining anymore," one commenter wrote. "This is just disturbing and weird."

Perry, however, shows no signs of slowing down. In his most recent video, the vlogger declared a new YouTube enemy — and enraged subscribers by forgetting Kobe Bryant's name. 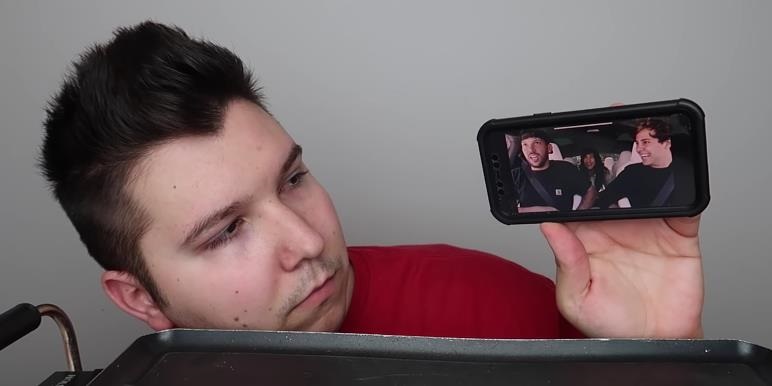 In the video, titled "David dobrik STOLE from me, the truth," Perry calls out his newest "enemy": YouTuber David Dobrik. Dobrik's offense? Seemingly, having a Tesla and giving away cars in viral videos, which Perry watched from his iPhone while filming.

"I watched this in bed today," Perry said through tears, "and I broke down. That was supposed to be me."

He went on to accuse Dobrik of "stealing [his] DNA" and "[his] future."

While devouring Panda Express noodles for the camera, Perry brought up the recent death of Kobe Bryant - forgetting the NBA legend's name.

In the hours since the video was posted, viewers have called for Perry's removal from the platform.

"You should not be allowed to have a platform to promote hate speech and lies," one commenter wrote. "I think it's time for YouTube to take your page Man."

One Ohio-based viewer even created a Change.org petition titled "Remove Nikocado Avocado From YouTube" that has received nearly 1,500 signatures.

Insider reached out to Perry multiple times and has not heard back at the time of this story.

A YouTuber deleted a video which showed her talking about mass suicide while eating cheese, but she called much of the criticism 'false outrage'

Related Links
The YouTuber behind the viral, jaw-dropping foam explosion explains the clean-up process and why...
A North Korean YouTuber is making videos that explain what it was like to live there, including...
Next on Business Insider
Ukraine released intercepted audio of Russian soldiers trying to pull strings to get sent home from war