LONDON - Boris Johnson revealed that he will run to replace Theresa May as leader of the Conservative party.

The former foreign secretary is the current bookies' favourite to take over from the prime minister when she resigns, which is widely expected to take place this summer.

Business Insider has taken a look at Johnson's long history of controversies and gaffes, which include calling gay men "tank-topped bumboys," reciting colonial poetry in Burma, and rugby-tackling a 10-year-old child.

Johnson was accused of Islamophobia in 2018 after he wrote that Muslim women wearing burkas "look like letter boxes".

Writing in the Telegraph newspaper, he said: "If you tell me that the burka is oppressive, then I am with you.

"If you say that it is weird and bullying to expect women to cover their faces, then I totally agree - and I would add that I can find no scriptural authority for the practice in the Koran.

"I would go further and say that it is absolutely ridiculous that people should choose to go around looking like letter boxes."

The Muslim Council of Britain accused him of "pandering to the far right" and he was placed under investigation by the Conservative party, before later being cleared. One of the low points in Johnson's time as foreign secretary was when he refused to deny reports that he used a swear word to describe business leaders who were concerned about the impact of Brexit.

Asked about corporate concerns over Brexit at an event for EU diplomats, Johnson is said to have replied: "F*ck business."

Writing in 2017, Johnson said the Libyan city of Sirte - large parts of which were destroyed during a brutal civil war - could be the new Dubai, adding: "All they have to do is clear the dead bodies away."

He subsequently refused to apologise for the comments. Johnson's most vulnerable moment as foreign secretary came when he was heavily criticised for making a misleading statement about Nazanin Zaghari-Ratcliffe, a British-Iranian woman serving a five-year jail term in Iran for alleged spying.

The then-foreign secretary said she was "simply teaching people journalism," which both her family and her employer said was untrue. A central part of her defence was that she was simply visiting the country on holiday.

Four days later, Zaghari-Ratcliffe was returned to court in Iran where Johnson's statement was cited as evidence against her. Johnson was accused of "incredible insensitivity" after it emerged that he had recited lines from a colonial-era Rudyard Kipling poem while on an official visit in Myanmar, formerly part of the British empire.

Johnson was inside the Shwedagon Pagoda, one of Burma's most sacred Buddhist sites, when he began reciting lines from The Road to Mandalay, including one which ran: "The temple bells they say/ Come you back you English soldier."

The UK ambassador to Myanmar, Andrew Patrick, was forced to stop Johnson from reading out further lines from the poem, telling him it was "not appropriate". 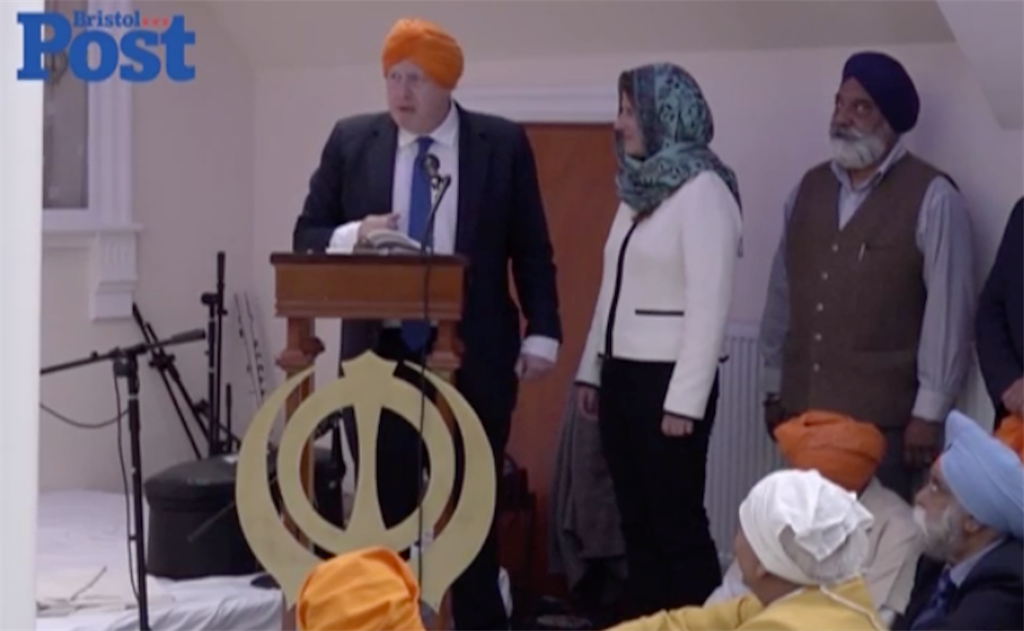 Johnson was described as "out of touch" after discussing the export of Scotch whisky during a visit to a Sikh temple.

He told gathered worshippers: "Whenever we go to India, to Mumbai or to Delhi, we have to bring 'clinkie' in our luggage.

"We have to bring Johnnie Walker, we have to bring whisky because as you may know there is a duty of 150% in India on imports of Scotch whisky so we have to bring it in duty free for our relatives. But imagine what we could do if there was a free trade deal with India - which there will be."

Some Sikh teachings consider alcohol to be prohibited. A worshipper at the temple shouted at Johnson, saying that his comments were "absolutely outrageous" and said alcohol "is against our religion".

October 2016: Johnson refers to Africa as 'that country' 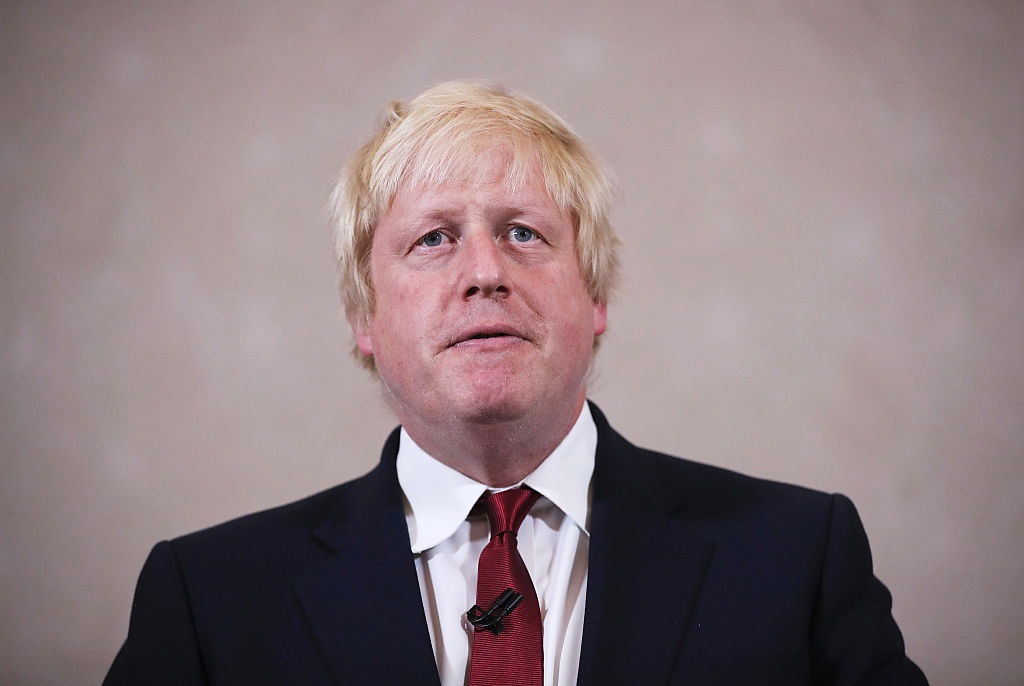 In a speech reflecting on his first three months as foreign secretary, Johnson referred to Africa as "that country."

"Life expectancy in Africa has risen astonishingly as that country has entered the global economic system," he told an audience at the Conservative Party conference.

May 2016: Johnson pens poem about Turkish president having sex with a goat

The poem, published by the Spectator magazine, offered the following limerick: "There was a young fellow from Ankara, Who was a terrific wankerer.

"Till he sowed his wild oats, With the help of a goat, But he didn't even stop to thankera."

When he was Mayor of London, Johnson faced a barrage of criticism for saying US President Barack Obama may have had an "ancestral dislike of the British Empire" because he was "part-Kenyan".

Writing in the Sun newspaper about Obama's criticism of the Brexit campaign, Johnson recounted a claim that a bust of former UK Prime Minister Winston Churchill was removed from the Oval Office after Obama was elected and returned to the British embassy.

Obama later said of Churchill: "I love the guy."

In 2015, the Mayor of London Boris Johnson managed to flatten an opponent in what was supposed to be an informal game of rugby in Tokyo.

The player he tackled was a ten-year-old Japanese schoolboy Toki Sekiguch. Johnson came under attack in 2013 for suggesting that women attend university in order to find husbands.

At an Islamic Economic Forum attended by Malaysian PM Najib Razak and Johnson, Razak said: "Before coming here, my officials have told me that the latest university intake in Malaysia, a Muslim country, 68 per cent will be women entering our universities."

Johnson interjected:"They've got to find men to marry." Boris Johnson stole the headlines at the 2012 Olympic Games in London after he was left dangling in the air on a zipwire holding two Union Jack flags.

To celebrate Team GB's first gold medal victory, the then Mayor of London took to a zipwire but came to a halt soon after, leaving him dangling over a crowd of onlookers.

November 2007: Hilary Clinton is like a 'sadistic nurse in a mental hospital'

Writing in the Telegraph in November 2007, when Clinton looked to be favourite to win the 2008 presidential election, Johnson said: "She's got dyed blonde hair and pouty lips, and a steely blue stare, like a sadistic nurse in a mental hospital.

He later attempted to make sheepish amends for the remarks.

As an MP, Johnson was forced to issue a grovelling apology to the country of Papua New Guinea after he linked it to "cannibalism and chief-killing" in his newspaper column.

He was later forced to apologise.

In a piece marking his resignation from the Spectator, Johnson wrote: "Once the fire is going well, you may find your eyes drifting to the lovely striped chesterfield across the room. Is it the right size, you wonder, for a snooze. . . ?"

"You come round in a panic, to find a lustrous pair of black eyes staring down at you. Relax. It's only Kimberly [Quinn, then the Spectator's publisher] with some helpful suggestions for boosting circulation."

He advised his successor to "pat her on the bottom and send her on her way".

July 2005: Islamophobia is a 'natural reaction' to Islam

Johnson waded into a debate over sexism in 2005 to defend Tim Hunt, a scientist who called for single-sex laboratories because "girls" are more likely to cry.

Writing in the Telegraph, Johnson wrote: "Is there any foundation to this casual assertion that women cry more readily than men?

"Men are said to have differently shaped tear ducts, for instance, and can therefore retain the tears for longer before they splash down the cheek," he wrote.

"Women are said to have more prolactin, a hormone associated with weeping."

April 2005: ‘Voting Tory will cause your wife to have bigger breasts’

In 2005, when he was campaigning to become the MP for Henley-on-Thames, Johnson said: "Voting Tory will cause your wife to have bigger breasts and increase your chances of owning a BMW M3."

Johnson was forced in 2004 to apologise for an editorial column he published as the editor of the Spectator magazine which claimed that drunken fans were partly responsible for the Hillsborough tragedy.

The editorial accused Liverpudlians of wallowing in their "victim status," stating: "The deaths of more than 50 Liverpool football supporters at Hillsborough in 1989 was undeniably a greater tragedy than the single death, however horrible, of Mr Bigley; but that is no excuse for Liverpool's failure to acknowledge, even to this day, the part played in the disaster by drunken fans at the back of the crowd who mindlessly tried to fight their way into the ground that Saturday afternoon."

Johnson, who was also serving as a shadow Tory arts minister, was sent to Liverpool to apologise.

In his Daily Telegraph column, Johnson mocked former prime minister Tony Blair's globe-trotting and said: "What a relief it must be for Blair to get out of England. It is said that the Queen has come to love the Commonwealth, partly because it supplies her with regular cheering crowds of flag-waving piccaninnies."

Johnson later apologised for his remarks.

In 2001, while he was editor of the Spectator magazine, Johnson published a piece suggesting a former friend and colleague had worked for the British secret service.

Johnson published a piece alleging that Agent Smallbrow, an MI6 agent, was Dominic Lawson, who was then editor of the Sunday Telegraph.

Lawson, who denied ever having been an agent, accused Johnson of putting journalists' lives at risk. In a 1998 Telegraph column about Peter Mandelson's resignation from the Labour government, Johnson said the announcement would lead to the blubbing of "tank-topped bumboys" in "the Ministry of Sound" nightclub, and "the soft-lit Soho drinking clubs frequented by Mandy and his pals".

In 1996, Johnson wrote a diary piece in the Telegraph reviewing the "hot totty" who were in attendance at the Labour conference.

"The unanimous opinion is that what has been called the 'Tottymeter' reading is higher than at any Labour Party conference in living memory," he wrote. He adds that: "Time and again the 'Tottymeter' has gone off as a young woman delegate mounts the rostrum." He suggested that women were turning to vote for Labour because of their natural "fickleness."However, he concludes that the real reason women are turning to Labour is because of their natural "fickleness".

Related Links
Theresa May is reportedly facing a coup from Boris Johnson and the man who ran her 2017 election...
Boris Johnson warned Britain is ‘headed for the status of colony’ in his resignation letter
Theresa May's cabinet in chaos as Boris Johnson calls her Brexit plans 'crazy'
Next on Business Insider
Inside Nike's high-profile gender discrimination lawsuit, where plaintiffs claim unequal pay and more