People demonstrate for the legalisation of gay marriage and parenting on December 16, 2012 in Paris, France.
Antoine Antoniol/Getty Images

People fighting for same-sex marriage rights around the world have seen global support increase in recent years. Australia, Malta, and Germany legalised same-sex marriage in 2017, and Taiwan made history last month , becoming the first government in Asia to welcome legislation on marriage equality.

Ecuador is the latest nation to join the fold, as the country's highest court on Wednesday voted 5-4 in favor of legalising same-sex marriage after a long legal battle with same-sex couples and advocates. The court has instructed the government to pass legislation ensuring equal treatment for all citizens who wish to marry.

There are currently only 28 countries that allow same-sex couples to marry.

1. In 2001, the Netherlands became the first country to legalise same-sex marriages. The legislation gave same-sex couples the right to marry, divorce, and adopt children. In 1999, some provincial governments extended common law marriages to gay and lesbian couples, providing them with most of the legal benefits of marriage but laws varied across the country.

4. Also in 2005, a closely divided Spanish parliament agreed to do the same. The law guaranteed identical rights to all married couples regardless of sexual orientation. Exemptions were also included in the new marriage law. Both religious institutions and civil officers could refuse to conduct same-sex marriage ceremonies.

6. In 1993 Norway allowed gay couples to enter civil unions, but it took until 2008 for a Norway to pass a gender-neutral marriage law. In January 2009, the bill was enacted into law, and gay couples were legally granted the right to marry, adopt children and receive artificial insemination.

7. In 2009, Sweden voted overwhelmingly in favour of legalising same-sex marriage. The bill passed with 261 votes in favor, 22 votes against and had 16 abstentions. 9. Portugal has also allowed same-sex marriage since 2010, after legislation was originally challenged by the country's president. Prior to the same-sex marriage law, a number of local jurisdictions, including the nation's capital, Buenos Aires, had enacted laws allowing gays and lesbians to enter into civil unions.

11. Denmark's legalisation came in 2012 after Queen Margrethe II gave her royal assent to the proposed legislation. Denmark was the first country to allow same-sex couples to register as domestic partners in 1989. Civil unions have been permitted in Uruguay since 2008, and in 2009 gay and lesbian couples were given adoption rights.

13. In 2013, New Zealand became the first country in the Asia-Pacific to legislate for same-sex marriage. The law won approval by a 77-44 margin in the country's legislature, which included support from former Prime Minister John Key. Hollande's signature had to wait until a court challenge brought by the conservative opposition party, the UMP, was resolved. France's highest court, the Constitutional Council, ruled that the bill was constitutional.

15. Brazil’s National Council of Justice ruled that same-sex couples should not be denied marriage licences in 2013, allowing same-sex marriages to begin across the country. Prior to the law, only some of Brazil's 27 jurisdictions had allowed same-sex marriage.

16. England and Wales became the first countries in the UK to pass marriage equality in 2014. Northern Ireland and Scotland are semi-autonomous and have separate legislative bodies to decide many domestic issues. In 2017, a judge dismissed two cases on same-sex marriage in Northern Ireland.

17. Scotland voted overwhelmingly in favour of of legalising same-sex marriage later in 2014. In addition to allowing same-sex couples to wed, the measure gave churches and other religious groups the option to decide whether or not they want to service same-sex marriages.

18. Luxembourg overwhelmingly approved legislation to allow gay and lesbian couples to wed and to adopt children that went into effect in 2015. The bill was spearheaded by the country's Prime Minister, Xavier Bettel. Bettel married his long-time partner Gauthier Destenay a few months after the legislation passed.

19. Finland approved a marriage equality bill in 2014, but it only went into effect this year. The bill started out as a public petition and was passed with 101-90 votes.

20. Ireland became the first country to legalise same-sex marriage through a popular vote in 2015. 62% of the referendum's respondents voted "yes" to amend the Constitution of Ireland to recognise same-sex marriage. Thousands of Irish emigrants had traveled home to participate in the popular vote. Although Greenland is an autonomous territory of Denmark, it was not subject to Denmark's 2012 ruling on legalising same-sex marriage. Same-sex marriage had been legal in 37 out of the 50 US states, plus the District of Columbia, prior to the 2015 ruling. Same-sex couples were already allowed to form civil partnerships before the ruling.

24. In 2017, Germany became the 15th European country to allow same-sex couples to wed. 25. And earlier this year nearly all of Malta's parliament voted in favor of legalising same-sex marriage. Despite opposition from the Catholic Church on the small Mediterranean island, marriage equality was passed by a landslide 66-1 vote.

26. Australian lawmakers in December enacted the will of the majority of citizens who overwhelmingly voted in favour of same-sex marriage during a postal survey held weeks earlier. Same-sex couples were officially allowed to marry beginning January 9, more than a month after it was legalised in the country.

Before the final vote in Australia on December 7, Prime Minister Malcolm Turnbull said it was a great day for Australia.

"What a day! What a day for love, for quality, for respect! Australia has done it. Every Australian had their say and they said it is fair, get on with it!" he said.

"We have voted today for equality, for love. It is time for more marriages, more commitment, more love, more respect, and we respect every Australian who has voted, those who voted yes, and those who voted no, this belongs to us all, this is Australia!"

27. Taiwan made history on Friday, becoming the first place in Asia to pass laws on marriage equality. 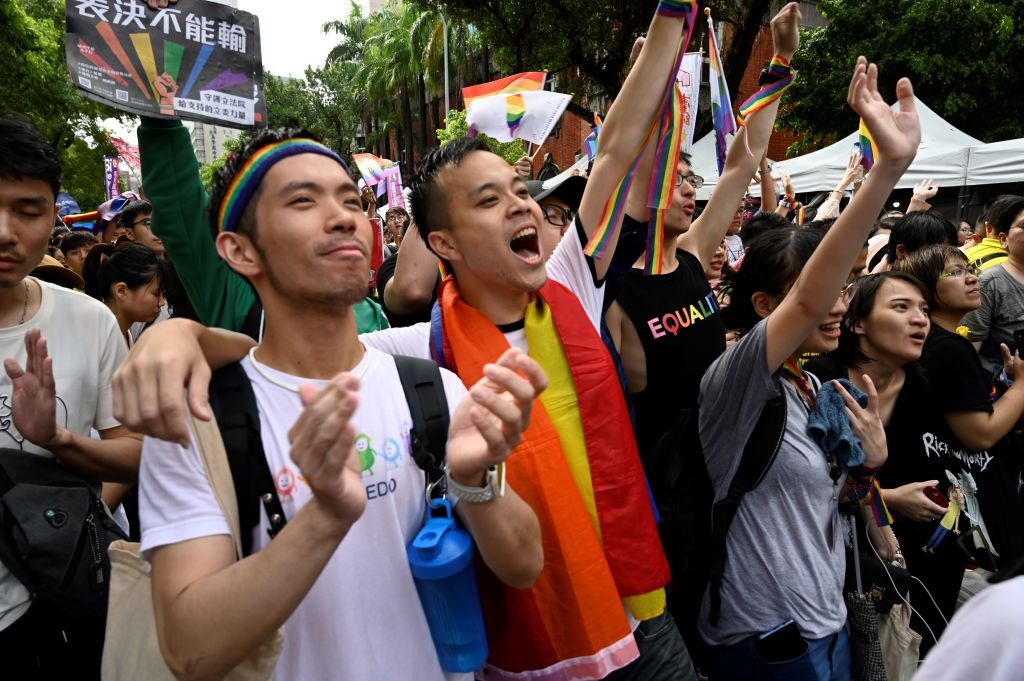 Countries in Asia are known for their conservative views on same-sex marriage and LGBT rights.

But Taiwan, which considers itself an independant democracy that champions human rights issues, broke from other Asian nations and passed a bill in favor of marriage equality by an overhwelming margin.

The bill will allow full legal marriage rights for same-sex couples and also offers limited adoption rights. It now heads to President Tsai Ing-wen before it is officially passed into law by May 24.

Ecuador has recognised same-sex partnerships since 2015, but the Constitutional Court officially approved same-sex marriages on June 12.

The court instructed the government to pass legislation that will cement equal rights for all citizens who wish to marry.

Related Links
For some reason, 3 men are trying to organise a 'Straight Pride' parade
I flew economy class on Kenya Airways' flagship 787 Dreamliner to see if 'the Pride of Africa'...
Brazil's president says he doesn't want the country to be a 'gay tourism paradise' because 'we...
Next on Business Insider
The only company with a vaccine approved for monkeypox says it's not sure if it can keep up with demand