Fire rages through the iconic Notre-Dame Cathedral on April 15, 2019 in Paris, France. A fire broke out on Monday afternoon and quickly spread across the building, collapsing the spire. The cause is unknown, but officials say it was possibly linked to ongoing renovation work. (Photo by Philippe Wang/Getty Images)

In a truly unbelievable scene, the Notre-Dame Cathedral caught fire: a spokesperson for the cathedral said that the frame might not even survive.

While it will likely take a few days to properly assess the damage and take stock of what has survived the fire and what has been destroyed, from relics of the patron saints of Paris to the largest organ in France, much of what could be lost is priceless.

Keep scrolling to see what firefighters tried to save.

A tiny piece of the Crown of Thorns that Jesus wore during his crucifixion is kept at the treasury at Notre-Dame. Relic of the crown of thorns. (Wikipedia)

The Crown of Thorns is a sacred relict, believed to have been worn by Jesus Christ himself. It's normally stored at the end of the nave of the cathedral, not readily visible to visitors. The most iconic stained glass window at Notre-Dame, the Rose Window, consists of three round windows that date back to 1260. According to reporters on the scene, the upper window is completely melted, though the fate of the lower windows is unclear.

Relics of both Saint Denis and Saint Genevieve were located inside the spire.

Denis and Genevieve are both the patron saints of Paris. Relics of theirs were placed atop the spire in 1935 by Archbishop Verdier to protect the church and its congregation from ill fortune.

The entire interior of the cathedral is covered with priceless paintings. Artwork adorns a significant amount of walls inside the church, with paintings dating back to the 1600s. Two of the most important are "Saint Thomas Aquinas, Fountain of Wisdom," created by Antoine Nicolas in 1648, and "The Visitation," created by Jean Jouvenet in 1716.

Pieces of the cross that Jesus was believed to be crucified on were located inside, along with one of the nails. These relics were normally on display on the first Friday of every month, and then every Friday during Lent. The wood fragments have been in the cathedral since 1805, while the nail was given to Notre-Dame in 1824.

Although the iconic statues representing the 12 Apostles were removed as recently as last week, there are plenty of other statues inside and outside Notre-Dame, including multiple gargoyles. The apostles were removed due to renovations that Notre-Dame was undergoing, but the same cannot be said for the gargoyles and chimera statues that look out over the cityscape.

There are statues located inside the cathedral as well that depict saints, religious figures, and mythological creatures.

Among the statues and sculptures inside are the Virgin Mary holding a (decapitated) baby Jesus, sculptures of Saint Etienne, and another statue of Mary sitting atop a throne.

The Great Organ — the largest organ in France — calls Notre-Dame home. It contains pieces that date back to the Middle Ages. The original Great Organ dates back to the Middle Ages, though its most recent iteration was built in 1868. It has been modified throughout the years, and was completely restored in 1992.

The organ has five keyboards and around 8,000 pipes.

Notre-Dame houses 10 bells that weigh up to four tons each. 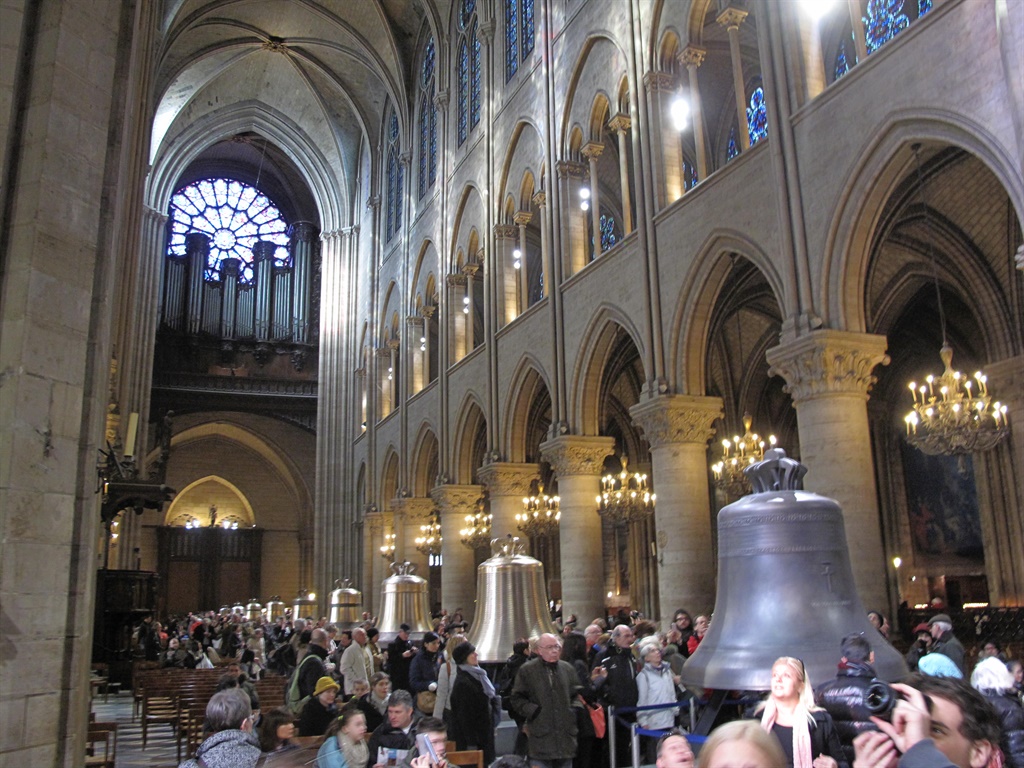 The oldest bell, named Emmanuel, has been inside the cathedral since 1861, and has tolled for momentous historic occasions, such as the end of World War II.