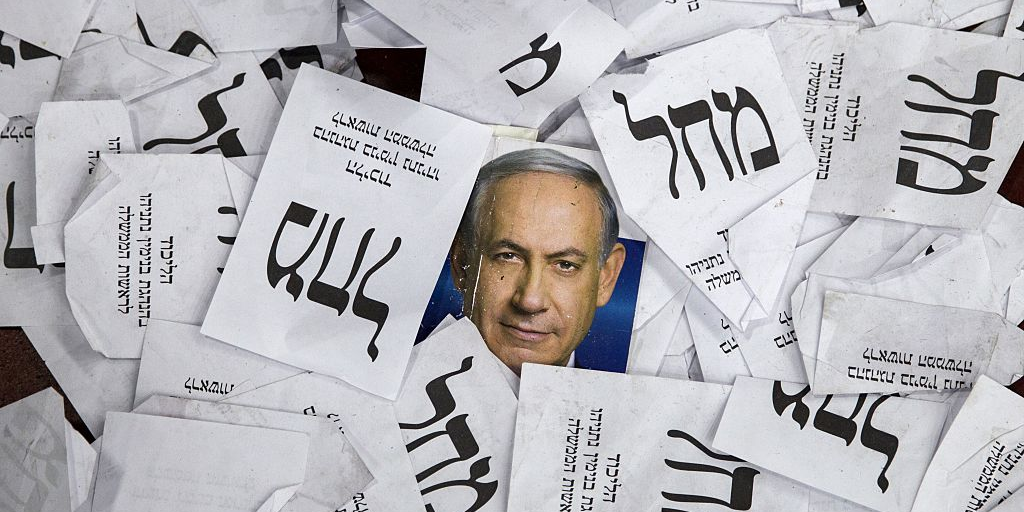 Israelis headed to the polls on Tuesday in a supercharged national election pitting the scandal-plagued incumbent Prime Minister Benjamin Netanyahu against the former chief of staff for the Israeli Defense Forces, Benny Gantz.

People all over the world are watching the Israeli election for a number of reasons. Netanyahu has held onto the premiership for over a decade and has weathered the polls four times before. He now faces an unlikely challenger, a former colleague he once called an "excellent officer and experienced commander," who initially proved widely popular but has been criticized for his inexperience in the political arena.

Netanyahu, too, is far from the ideal candidate - the man affectionately known as "Bibi" is currently embroiled in several corruption scandals, and may face criminal charges in the near future.

With 97% of the votes tallied as of Wednesday morning, the outcome remains uncertain, even as both sides claimed victory in the race. Local news have put Likud and Kahol Lavan neck-and-neck, with 35 seats each as of 10:30 am local time.

Here's everything you need to know about the 2019 Israeli elections:

Who are the candidates? This year's election is pitting a tenured leader with a loyal base against a well-respected political newcomer seeking to uproot the establishment.

Benjamin Netanyahu first entered politics in the 1980s before serving his first term as Prime Minister in 1996 under the right-wing Likud party. The 69-year-old has held a tight grip on power for 13 years, favoring strong national security over peace with the Palestinians.

Netanyahu has also grown close to the US President Donald Trump since his election in 2016. Under the Trump administration, the US has made several policy decisions favorable to Israel, including recognizing Jerusalem as Israel's capital and moving its embassy there, withdrawing from the nuclear deal it signed with Israel's nemesis Iran, and calling for the recognition of Israel's annexation of the Golan Heights.

Netanyahu has also grown close to Russian President Vladimir Putin, meeting with the leader 12 times since 2015 including just days before the election, Haaretz reported.

On the opposing side, stands Benny Gantz, a 59-year-old who served as the Israeli Army's Chief of Staff from 2011-2015, navigating the country through two incursions on the Gaza Strip, which earned him praise for his leadership.

Many voters see Gantz as a welcome change to Netanyahu's embattled premiership, and view him as a worthy adversary to the prime minister on issues like national security. After retiring from his post in the Israel Defense Forces, Gantz went into politics, teaming up with media-personality Yair Lapid, head of the Yesh Atid Party, to form the Kahol Lavan political alliance.

"Netanyahu has done good things too, but after 13 years in power, he is working only for himself," Gantz wrote in a column for Israeli daily Yediot Aharonot this week. "Thank you, Bibi, enough."

Why is the election happening now? While elections usually happen every four years, the country's parliamentary system makes it difficult for elected officials to maintain a governing coalition long enough to last an election cycle.

Voters are choosing from a record list of 40 parties to serve in the 120-seat Knesset.

The electoral threshold is 3.25%, which means a party needs to pass that threshold - equivalent to four Knesset seats - of the overall vote in order to gain representation.

It will be up to President Reuven Rivlin to select the prime minister based on which party has the best chance of forming a coalition. Rivlin will consult with leaders of parties which won Knesset seats about their preference for prime minister. After the president makes his selection, the chosen candidate has 42 days to form a coalition government through vigorous, often tense, negotiations with smaller parties.

If the selected leader can't form a coalition, another candidate will be given a chance.

Both sides have different strategies when forming a coalition: Netanyahu will likely seek the support of ultra-Orthodox and right-wing nationalist parties, as he has done in his previous government, while Gantz will likely have the support of the left-wing parties, though it's unclear at this stage if there will be enough seats on the left to win a majority.

A last, but unlikely option, would be if Netanyahu and Gantz joined together to form a unity government.

The candidates are no strangers to controversy. While neither Netanyahu nor Gantz are strangers to controversy, this election may prove to be the most important one to Netanyahu as he faces several allegations of bribery, fraud and breach of trust.

Case 1,000, as it's known, concerns allegations that Netanyahu and his wife, Sara, accepted one million shekels ($276,000) in gifts from Australian billionaire James Packer and Hollywood producer Arnon Milchan.

Case 2,000 accuses Netanyahu of trying to broker a deal with Arnon Mozes, publisher of Israeli daily Yediot Aharonot, for favorable coverage in exchange for government limits on the circulation of a rival publication.

Observers say Netanyahu may be hoping a win could help him in the eyes of the law. There is also a chance he could pass a law in the future that would essentially protect him from standing trial.

An Israeli watchdog group last week also found a network of hundreds of social media bots working to boost Netanyahu on social media, though Israeli researchers at Ben Gurion University said the data does not prove a coordinated effort to influence election results.

Gantz has also defended himself from scandal in the past.

In February, an Israeli-American woman named Navarone Jacobs accused Gantz of exposing himself to her 40 years ago when she was 14 years old. Gantz strongly denied the allegations and filed a half million shekel lawsuit against the woman for claims he called "blood libel."

Gantz also chaired a security and tech company called The Fifth Dimension, which was forced to shut down after one of its key financial backers, a Russian oligarch named Viktor Vekselberg, was sanctioned by the US in 2018.

Who is likely to win? With 97% of the votes tallied as of Wednesday morning, the outcome remains uncertain, even as both sides claimed victory in the race. Local news have put Likud and Kahol Lavan neck-and-neck, with 35 seats each as of 10:30 am local time.

While neither party will win a ruling majority, local media predicts Netanyahu could have an advantage in building his coalition with ultra-Orthodox and right-wing parties which have won a combined 30 seats, enough to build a solid majority coalition.

The other 3% of the vote is expected to be tallied on Wednesday, and final results are expected out by Friday. But there could now be weeks of political negotiation before a government is actually formed.

Related Links
Trump spoke to an audience of American Jews and referred to Israel's Benjamin Netanyahu as 'your...
Check out the flashy, custom Rolls-Royce that was just delivered to a Google executive
The US has officially moved its embassy in Israel to Jerusalem — and at least 37 Palestinians are...
Next on Business Insider
Avocados are 40% cheaper due to higher harvests, but consumers are too constrained to buy them