All day long, we're inundated by interruptions and alerts from our devices. Smartphones buzz to wake us up, emails stream into our inboxes, notifications from coworkers and far away friends bubble up on our screens, and "assistants" chime in with their own soulless voices.

Such interruptions seem logical to our minds: we want technology to help with our busy lives, ensuring we don't miss important appointments and communications.

But our bodies have a different view: These constant alerts jolt our stress hormones into action, igniting our flight or flight response; our heartbeats quicken, our breathing tightens, our sweat glands burst open, and our muscles contract. That response is intended to help us outrun danger, not answer a call or text from a colleague.

We are simply not built to live like this. Our apps are taking advantage of our hard-wired needs for security and social interaction and researchers are starting to see how terrible this is for us. A full 89% of college students now report feeling "phantom" phone vibrations, imagining their phone is summoning them to attention when it hasn't actually buzzed.

Endocrinologist Robert Lustig tells Business Insider that notifications from our phones are training our brains to be in a nearly constant state of stress and fear by establishing a stress-fear memory pathway. And such a state means that the prefrontal cortex, the part of our brains that normally deals with some of our highest-order cognitive functioning, goes completely haywire, and basically shuts down.

Your brain can only do one thing at a time

Scientists have known for years what people often won't admit to themselves: humans can't really multi-task. This is true for almost all of us: about 97.5% of the population. The other 2.5% have freakish abilities; scientists call them "super taskers," because they can actually successfully do more than one thing at once. They can drive while talking on the phone, without compromising their ability to gab or shift gears. 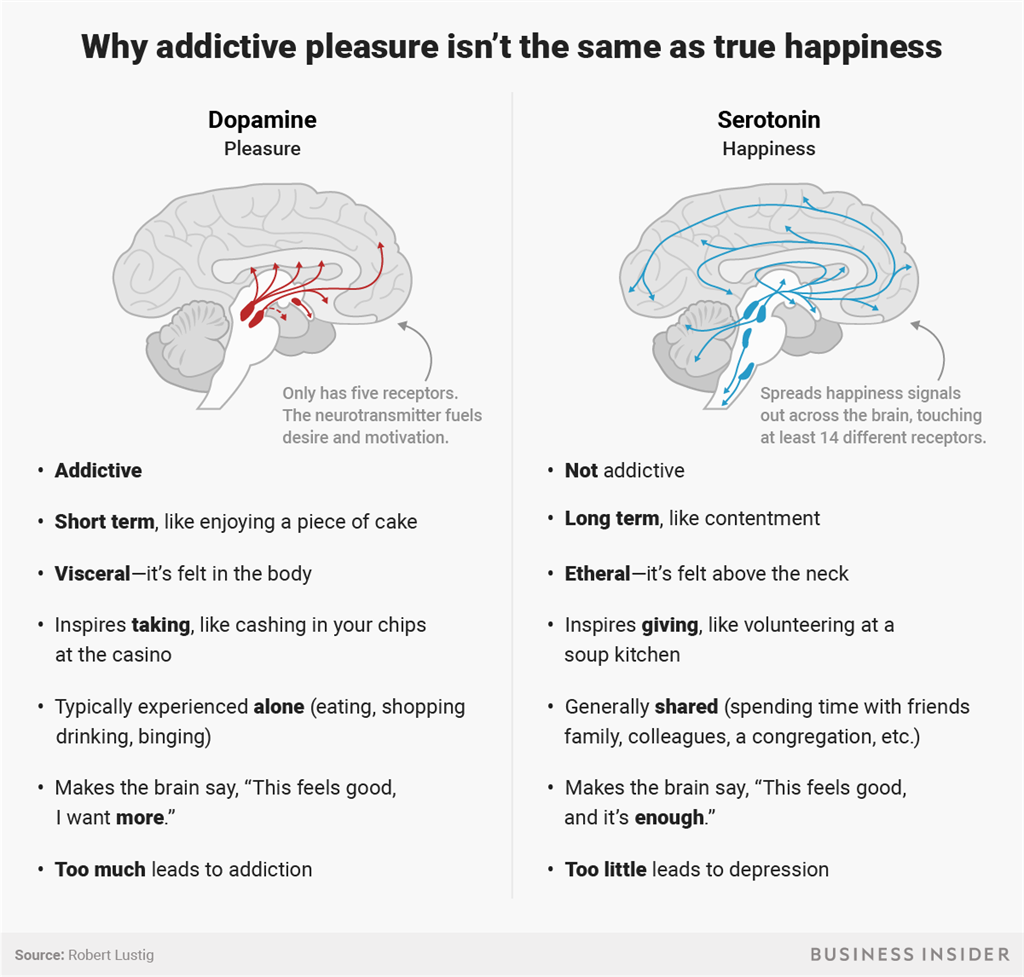 But since only about 1 in 50 people are super taskers, the rest of us mere mortals are really only focusing on just one thing at a time. That means every time we pause to answer a new notification or get an alert from a different app on our phone, we're being interrupted, and with that interruption we pay a price: something called a "switch cost."

Sometimes the switch from one task to another costs us only a few tenths of a second, but in a day of flip-flopping between ideas, conversations, and transactions on a phone or computer, our switch costs can really add up, and make us more error-prone, too. Psychologist David Meyer who's studied this effect estimates that shifting between tasks can use up as much as 40% of our otherwise productive brain time.

Every time we switch tasks, we're also shooting ourselves up with a dose of the stress hormone cortisol, Lustig says. The switching puts our thoughtful, reasoning prefrontal cortex to sleep, and kicks up dopamine, our brain's addiction chemical.

In other words, the stress that we build up by trying to do many things at once when we really can't is making us sick, and causing us to crave even more interruptions, spiking dopamine, which perpetuates the cycle.

Our brains can only process so much information at a time, about 60 bits per second.

The more tasks we have to do, the more we have to choose how we want to use our precious brain power. So its understandable that we might want to pass some of our extra workload to our phones or digital assistants.

But there is some evidence that delegating thinking tasks to our devices could not only be making our brains sicker, but lazier too.

The combination of socialising and using our smartphones could be putting a huge tax on our brains.

Researchers have found smarter, more analytical thinkers are less active on their smartphone search engines than other people. That doesn't mean that using your phone for searching causes you to be "dumber," it could just be that these smarties are searching less because they know more. But the link between less analytical thinking and more smartphone scrolling is there.

We also know that reading up on new information on your phone can be a terrible way to learn. Researchers have shown that people who take in complex information from a book, instead of on a screen, develop deeper comprehension, and engage in more conceptual thinking, too.

Brand new research on dozens of smartphone users in Switzerland also suggests that staring at our screens could be making both our brains and our fingers more jittery.

In research published this month, psychologists and computer scientists have found an unusual and potentially troubling connection: the more tapping, clicking and social media posting and scrolling people do, the "noisier" their brain signals become. That finding took the researchers by surprise. Usually, when we do something more often, we get better, faster and more efficient at the task.

But the researchers think there's something different going on when we engage in social media: the combination of socializing and using our smartphones could be putting a huge tax on our brains.

Social behavior, "may require more resources at the same time," study author Arko Ghosh said, from our brains to our fingers. And that's scary stuff. Should being on your phone in public be taboo?

Despite these troubling findings, scientists aren't saying that enjoying your favorite apps is automatically destructive. But we do know that certain types of usage seem especially damaging.

Checking Facebook has been proven to make young adults depressed. Researchers who've studied college students' emotional well-being find a direct link: the more often people check Facebook, the more miserable they are. But the incessant, misery-inducing phone checking doesn't just stop there. Games like Pokemon GO or apps like Twitter can be addictive, and will leave your brain craving another hit. Addictive apps are built to give your brain rewards, a spike of pleasure when someone likes your photo or comments on your post. Like gambling, they do it on an unpredictable schedule. That's called a "variable ratio schedule"and its something the human brain goes crazy for.

This technique isn't just used by social media, it's all over the internet. Airline fares that drop at the click of a mouse. Overstocked sofas that are there one minute and gone the next. Facebook notifications that change based on where our friends are and what they're talking about. We've gotta have it all, we've gotta have more, and we've gotta have it now. We're scratching addictive itches all over our screens.

Lustig says that even these kinds of apps aren't inherently evil. They only become a problem when they are given free reign to interrupt us, tugging at our brains' desire for tempting treats, tricking our brains into always wanting more.

Lustig says he wants to change this by drawing boundaries around socially acceptable smartphone use. If we can make a smartphone addiction taboo (like smoking inside buildings, for example), people will at least have to sanction their phone time off to delegated places and times, giving their brains a break.

"My hope is that we will come to a point where you can't pull your cell phone out in public," Lustig says.