China appears to be gearing up for a possible military intervention in Hong Kong, but experts say Beijing is likely bluffing 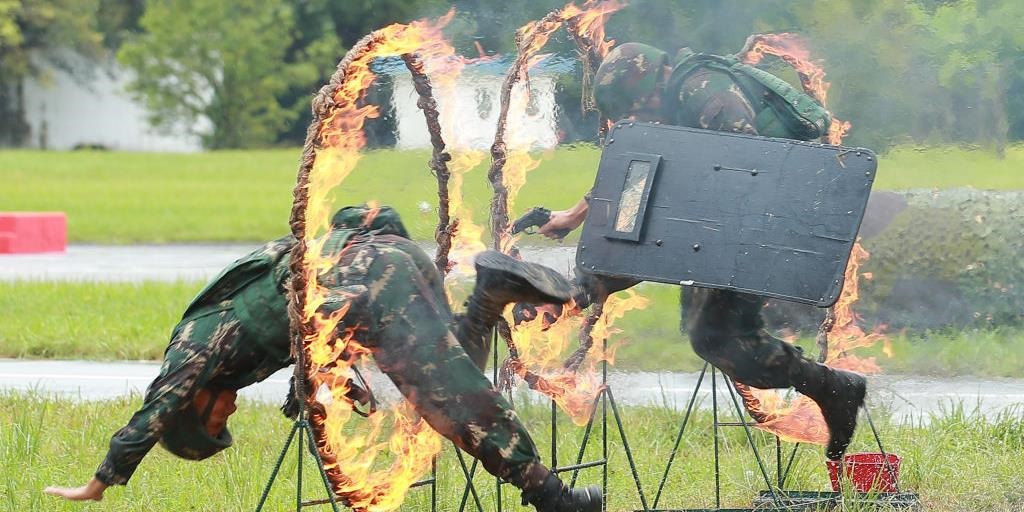 Though China appears to be gearing up for military intervention in Hong Kong, experts are skeptical that the country is ready to pull the trigger just yet on a move that would likely have devastating consequences.

Chinese military vehicles have gathered in Shenzhen, a city in mainland China bordering Hong Kong, in what is being perceived as a warning sign from China in response to over 10 weeks of escalating protests in Hong Kong.

What initially started as a protest against a proposed bill that would allow for the extradition of Hong Kong residents to mainland China for trial has ballooned into a fight to uphold democracy in the semiautonomous Chinese territory.

In a propaganda video released by Chinese state media this week, numerous armored personnel carriers, trucks, and other vehicles can be seen parading through the streets of Shenzhen "in advance of apparent large-scale exercises." The vehicles belong to the Chinese People's Armed Police Force, a paramilitary police force responsible for riot control and counterterrorism.

The Peopleâ€™s Armed Police have been assembling in Shenzhen, a city bordering Hong Kong, in advance of apparent large-scale exercises, videos obtained by the Global Times have shown. https://t.co/3KgaXeHw3C pic.twitter.com/YXAORMay0W

Additional video posted to social media appeared to show military vehicles entering the Shenzhen Bay Sports Center, a large stadium located just 5 kilometers, or 3 miles, from the entrance to the Shenzhen Bay Bridge, which connects the city to Hong Kong.

China has been flexing its military might for several weeks in the lead up to what has been labelled by observers as its most explicit threat of force seen yet.

Last week, 12,000 police officers, tanks, helicopters, and amphibious vehicles gathered in Shenzhen for what appeared to be anti-riot drills. In videos of the drills posted on Twitter by Chinese state media, police appear to charge at protesters dressed in all black and wearing face masks - similar to the uniform adopted by protesters in Hong Kong.

Although Hong Kong maintains certain freedoms from China since it was passed on from Britain in 1997, the region has never had a military force of its own.

The People's Liberation Army (PLA) Hong Kong Garrison - composed of personnel from China's navy, ground, and air forces - operates under the Hong Kong's " Basic Law" and was established for the city's "defense."

China has never had to utilise its Hong Kong military arm, but the country has indicated that it is poised and ready to do so if the situation in Hong Kong cannot be contained by local forces.

Last month, the Hong Kong and Macau Affairs Office under the State Council, the Chinese government agency responsible for coordination between the mainland and the two territories, held the first press conference of its 22-year history.

The agency said in a statement, that the situation in Hong Kong had gone "far beyond the scope of peaceful march and demonstration, undermined Hong Kong's prosperity and stability, and touched the bottom line of the principle of 'one country, two systems.'"

But just because China can intervene doesn't mean it will - yet Though China has indicated it is prepared to use force doesn't mean it necessarily will at this point.

Experts remain skeptical that Chinese military intervention in Hong Kong is imminent, and say recent displays are part of a wider strategy aimed at intimidation and deterrence.

Adam Ni, a researcher on Chinese foreign and security policy at the Australian National University, told Business Insider that while Beijing may at some point choose to use ground force, Chinese intervention isn't imminent because the risks of such a move are too high at this stage.

"Beijing is trying to deter escalating protests by signaling that it's determined to intervene with military force if necessary," he said.

"But the complexity, as well as the risk of such an operation, is so high at this point that it's just not worth it to the leadership in Beijing."

Ni explained that the impacts of such a decision on the ground would be "tragic" and have a big impact on Hong Kong's society, economy, as well as the lives of Hong Kong people.

"I don't believe the Chinese armed forces would be as restrained as the Hong Kong police, even though we've seen many cases of police brutality and misuse of force so far in the continuing protests in Hong Kong.

"I think the force Chinese forces would be applying would be much higher."

He continued: "It's likely that we'll see a chaotic situation, a city very much under martial law so to speak with empty streets and potential confrontations between hardcore protesters and Chinese forces that may well have tragic consequences."

Other experts appear to agree with Ni's assessment of the situation. Chris Patten, Hong Kong's last British governor, told the BBC Radio on Tuesday that Chinese intervention in Hong Kong would be a "catastrophe for China and of course for Hong Kong."

He remained hopeful that Chinese President Xi Jinping would be able to come to a reasonable solution with Hong Kong's government before considering the use of force.

"I very much hope that even after 10 weeks of this going on, the government and President Xi will see the sense in establishing a way of actually bringing people together," he said.

Despite the devastating consequences, China wants to maintain the impression that it could strike at any moment, hoping to strike fear in the hearts of protesters who show no sign of slowing.

"It is hoped Hong Kong can restore order by itself," he wrote on Twitter. "That is the best end. If the development of the situation suggests there is no such hope, Beijing's intervention will be inevitable."

"It's a hard choice, but once it becomes the decision. it will be a firm one."