All you need to know about Covid vaccine for kids: Lower dose, fewer side effects, same benefit A boy receives a dose of the Pfizer COVID-19 vaccine at the Clalit Healthcare Services in the Israeli city of Holon near Tel Aviv on June 21.
Jack Guez/AFP via Getty Images

Five- to 11-year-olds are on the cusp of being eligible for Pfizer's Covid-19 vaccine, following a near-unanimous vote by the Food and Drug Administration's advisory panel on Tuesday.

In clinical trials, the Pfizer vaccine was found to be 91% effective at reducing the risk of symptomatic illness in children in that age group. Should the FDA authorise the vaccine, the Centers for Disease Control and Prevention will then need to sign off before kids can go in for shots. The CDC's next advisory meeting is slated for Tuesday and Wednesday.

There are key differences between the vaccine 5- to 11-year-olds will receive and the Pfizer shots given to adults and teenagers. Here's what parents may want to know about the needles, doses, and side effects before the shot becomes available. 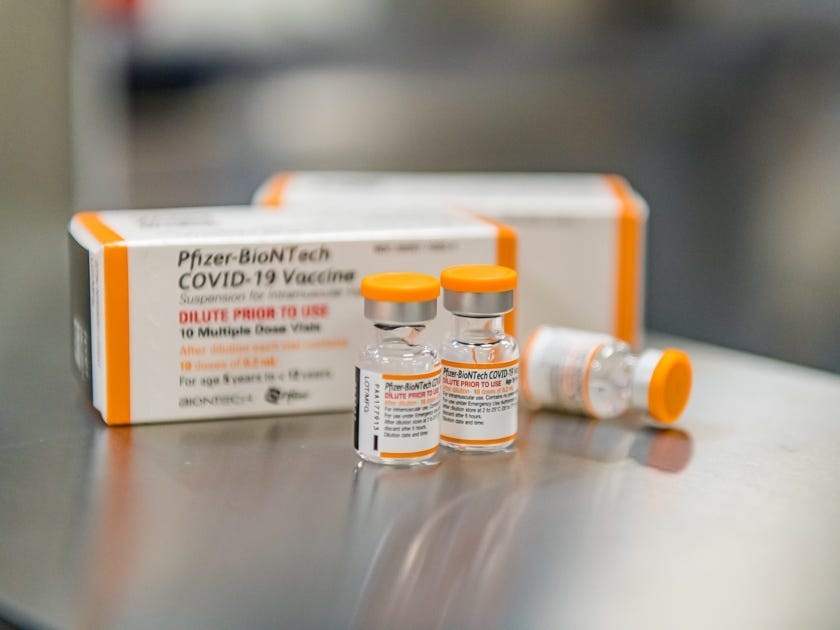 The Pfizer-BioNTech COVID-19 vaccine will have special packaging for 5- to 11-year-old kids, using a lower-strength dose.
Pfizer

The vaccine rollout will look different for kids than it did for adults.

Instead of the mass vaccination sites that adults flocked to, paediatricians will be heavily involved in administering vaccines to kids, according to the White House. Doctors and nurses will also use smaller needles on kids than on adults.

That lower dose is just as effective for young children as a higher dose would be, according to Dr Simon Li, a principal investigator helping run the vaccine study on kids in New Jersey alongside Pfizer.

"The dose decision-making was really smart," Li, who's also an associate professor of paediatrics at Rutgers, told Insider.

Pfizer tested the vaccine on kids at 30 micrograms and at 10 micrograms and found that the two versions produced a similar amount of antibodies in that age group. But kids experienced more side effects - such as pain, tenderness, redness, fever, chills, and fatigue - with the 30-microgram dose.

Li said he hopes that hearing the vaccine was specifically designed to have fewer side effects for kids will alleviate parental stress. His own kids are 4, 8, and 10, and he's impatient to get them the shots.

"Once it's available, I would 100% get them vaccinated," Li said. "Hopefully they can be first in line." Unlike COVID-19 vaccines for adults, many of which took place at mass vaccination sites and pharmacies, pediatricians will be heavily involved in administering vaccines to kids, according to the White House.
Hero Images/Getty Images

Pfizer's clinical trial for 5- to 11-year-olds included 2,268 participants. Of that group, 19 kids tested positive for Coid-19, 16 of whom had received placebo shots and three of whom were in the vaccinated group. There were no severe Covid-19 cases or deaths in either cohort. The most common side effects from the shot were pain at the injection site, fatigue, and headache.

Pfizer reported five serious adverse events during the course of the trial, but none was linked to the vaccine. Rather, the five events serve as both a reminder of the detailed monitoring in clinical trials and also of how young the participants are. In addition to reporting bone fractures and an arthritic infection among the kids in its trial, Pfizer also noted that one child swallowed a penny.

Federal advisors question whether the shot is necessary for all kids

"I do believe children at high risk do need to be vaccinated," Dr James Hildreth, a panelist and president of Meharry Medical College, said. "But vaccinating all of the children to achieve that does seem a bit much for me."

Another panelist, Dr Eric Rubin, the editor-in-chief of The New England Journal of Medicine, weighed the risk of myocarditis, or heart inflammation, in his decision. But ultimately, he and other panelists agreed that the vaccine's benefits outweigh the risk of that and other potential rare side effects.

Dr Andrew Pavia, a paediatric infectious disease specialist at the University of Utah who was not on the panel, sees it differently.

"Delta has made Covid a paediatric problem," Pavia told Insider earlier this month. "They've often heard that because kids don't die at the rates that adults do, that it's not a big deal. And that was sort of true in 2020. With Delta, it's not true."