South African members of medical schemes spent at least R17 billion – conservatively counted – out of their own pockets last year to cover their medical expenses, an increase of 55% over the past five years.

They withdrew another R18 billion from medical savings, for a combined R35 billion not paid directly by their medical aids, data released by the Council for Medical Schemes (CMS) this week shows.

The CMS calculates out-of-pocket spending as the difference between the claims submitted by members of medical schemes and the amounts paid on those claims. It believes that makes for an indication that can be used to track trends, but not a number that can be trusted as such.

"This is an understatement of the true [out of pocket expenses] that members incur as it is likely that medical schemes do not fully capture and submit all costs associated with seeking healthcare," the CMS says of its method.

A large majority of recorded out-of-pocket spending went to dispensed medicine, at 33% of the total amount, a proportion that held steady between 2018 and 2019. The next closest category was for supplementary and allied health professionals, at 14% of the total. All other areas were below 10% of the total out-of-pocket amount, including GPs (9%), specialists (8%), hospitals (7%), and dentists (6%). 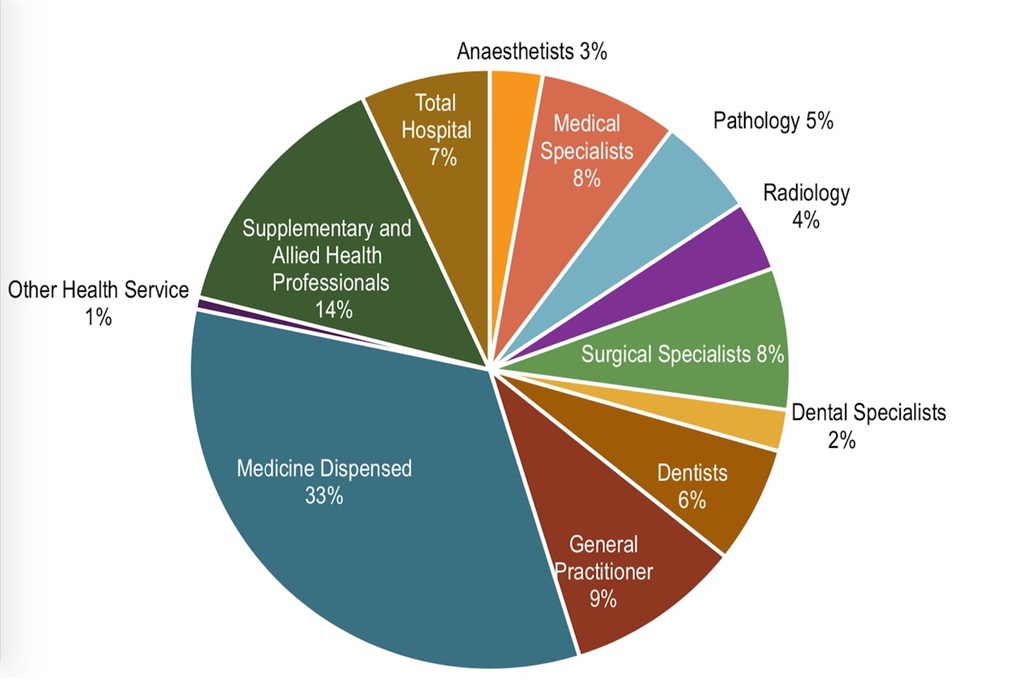 But when considered as a fraction of total payments across different types of medical expenditure, hospitals looms somewhat larger. Of total spending within categories, medical aid members paid a little under 14% of dispensed medicines out of their own pockets. Surgical specialists were the next most expensive, with 6.3% of the total costs born directly by members, followed closely by total hospital expenditure at 6.2%.

When it came to GPs, out-of-pocket payments – or at least those captured in the accounts of medical schemes – were just 2.3% of total spending for the year, and dental specialist were even lower, at 1.2%.

How medical savings are spent

Medical aid members used just about R18 billion worth of medical savings in the year.

As with out-of-pocket payments, the money in medical savings accounts went largely to medicines, which took up 37.4% of the total amount. Another 19.5% went to specialists, 18% to supplementary and allied health professionals, and 14% to GPs, while payments to dentists accounted for 8%.

Such medical savings could be coming under pressure, the accounts of medical schemes show; on a per member basis, once corrected for inflation, South Africans were saving 1.76% less in such vehicles than they had the year before.

Related Links
R408 for a GP and R4,131 for a surgeon: Here’s what average medical events cost in SA
As SA’s first Covid-19 peak built up, medical aids spent less than in 2019
Nearly half SA’s medical aid members are being ‘denied’ financial help - these schemes don't assist
Next on Business Insider
The US and allies have reportedly floated capping Russian oil prices at as low as $40 a barrel