Survivalists are buying underground doomsday bunkers to prep for the apocalypse. Here's what they look like. An underground bunker from The Vivos Group.
Terravivos.com

People have been worried about the planet's demise for centuries, but the tools for keeping ourselves safe are more advanced than ever.

If a nuclear war were to break out or a climate-related disaster were to hit, a handful of wealthy survivalists would be ready to retreat into their personal doomsday shelters.

In recent years, companies like Survival Condo Project have built luxury bunkers to house the superrich during a global disaster. (They can also live there now.) These underground dwellings are designed to make a catastrophe a little more bearable - some have movie theaters, swimming pools, and rock walls. Other similar companies, like the The Vivos Group, offer amenities like security cameras to protect residents from outside threats.

Any doomsday shelter, no matter how opulent, usually includes a few key features, like blast-proof doors, an array of freeze-dried food, and medical supplies.

Here's what these modern, high-end doomsday shelters look like.

To avoid the consequences of climate catastrophes like flooding, many doomsday shelters are located far from large bodies of water, at high altitudes. The Vivos Group has bunkers stationed near the Black Hills of South Dakota, at an altitude of 3,800 feet (1,158 metres). It also operates facilities in Indiana and Germany.

The structures can be submerged in water for a long period of time, but of course, that would require them to be sealed off, preventing anyone from coming or going.

The locations are generally remote and far away from any military targets. 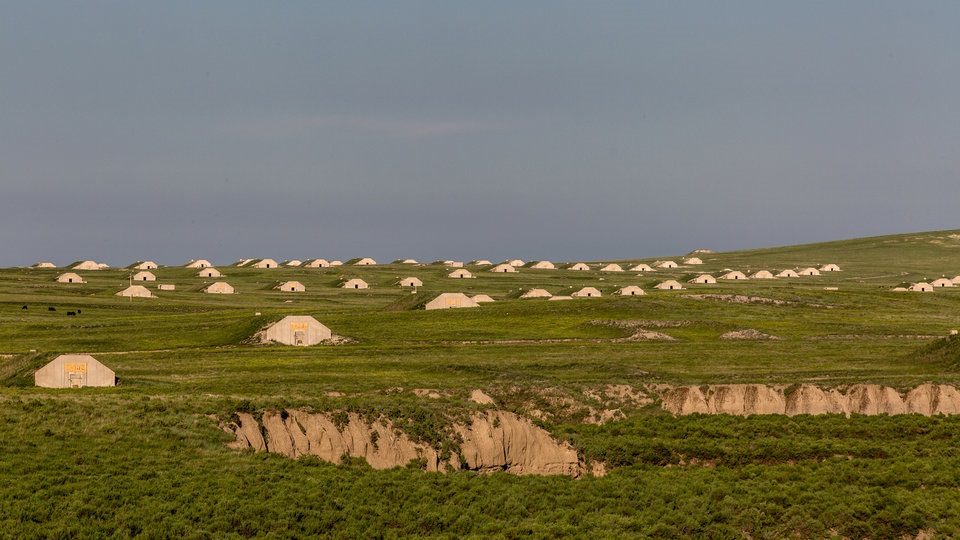 The Vivos Group advises against building a shelter in your backyard and suggests instead that the location of a doomsday bunker be kept secret.

Building a bunker in a remote area also ensures that it's far from military targets. If Russia were to launch a nuclear attack on the US, Russian state TV has identified a few places that could be hit, including the Pentagon, Camp David, Jim Creek Naval Radio Station in Washington, Fort Ritchie in Maryland, and McClellan Air Force Base in California.

Underground bunkers are considered safest, since they can protect those inside from nuclear blasts. The Survival Condo Project operates a 15-story bunker in Kansas. The facility is located at a former missile silo, so it extends hundreds of metres below ground. It's designed to shelter the ultra-wealthy during an apocalypse, but until that moment arrives, people who've bought space there are free to come and go as they wish. The Vivos compounds have steel blast doors - the type used in nuclear power plants - which are typically made of concrete encased in a steel envelope.

The exteriors are made of thick concrete that's tightly sealed so that no gas or water can enter. Vivos' concrete bunkers in South Dakota are designed to withstand a 20-megaton blast a few miles away. Bunkers made of fiberglass or corrugated metal may be too flimsy to withstand a nuclear attack or climate disaster.

Some shelters have built-in security systems to scan for possible threats outside the facility. The Survival Condo Project comes with armed security guards that patrol the grounds. In the event of a disaster, the guards can hop into SWAT team-style trucks and retrieve residents within 400 miles. The Survival Condo Project has stored enough freeze-dried food in its bunker to last each resident five years.

The Survival Condo Project's shelter even contains vertical farm so that residents could grow vegetables — if there's electricity. Instead of keeping stockpiled water bottles, some compounds tap into underground wells for a more renewable source of fresh water. Humans can only go about three to four days without water. So at the Vivos compound in South Dakota, water gets pumped from underground wells into stainless-steel storage tanks.

Any proper doomsday shelter should have medical supplies.

It's a good idea to have a readily available supply of basic necessities like band-aids, disinfectant wipes, and any prescription drugs you take.

Although some people keep stores of potassium iodide pills, which block the absorption of radioactive iodine in the body, those won't get you that far in a nuclear disaster - radioactive iodine only accounts for about 0.2% of your overall exposure to radionuclides after a nuclear explosion.

At Vivos bunkers, residents are asked to send any personal medications to be stored there. They're also screened for contaminants and viruses before they enter the bunkers.

Doomsday shelters need to be off-grid in case a disaster cuts off power. To supply electricity, bunkers need an underground power generator. They also have to stockpile fuel to keep the generator running.

Some doomsday bunkers offer air filters that can get rid of air pollution from nuclear fallout. Rising S Company, a bunker manufacturer, offers an "NBC" air filtration system that it says is capable of filtering out nuclear, biological, and chemical contaminants.

This system is advertised as protection from nuclear fallout - the clouds of radioactive dust and ash that disperse into the atmosphere after a nuclear explosion. The company also says it the device can filter out harmful gases released by chemical weapons, like sulfur and cyanide.

The cost of these doomsday amenities is extremely high, though. The Survival Condo Project is even more expensive - around $3 million (R44 million) per unit to purchase (including furniture and a three-year individual food supply). A typical unit is 1,820 square feet (554 square metres), so the company estimates that it can fit six to 10 people.

Interest in the Survival Condo Project "seesaws with who's in the White House," the company's founder, Larry Hall, previously told Business Insider.

"When the rhetoric was hot and heavy between Trump and Kim Jong-un in North Korea, there was a real big spike in phone calls," he said.