The fear of robots coming for your job is one of the many challenges confronting 21st-century workers, but the machines aren't ready to take on every industry just yet.

Bridgewater Associates, the massive hedge fund founded by legendary investor Ray Dalio, just released a report on the changing relationship between labour and capital in the US.

One of the big factors the Bridgewater authors highlighted was the ongoing rise in automation across industries, which they noted could be a support for corporate profits in the years to come as more efficient robots and software potentially replace slower and error-prone human labour.

Bridgewater cited a 2016 report from consulting firm McKinsey & Company that looked at which industries in the US were most susceptible to being automated.

The McKinsey report used data from the Department of Labour to estimate how much time workers in various industry sectors spent doing different types of tasks, and which of those tasks could, theoretically, be automated using present technology.

McKinsey noted that tasks like physical labour in a predictable environment, like a fast-food restaurant or a factory assembly line, and basic data processing, like tracking payroll accounting, could easily be automated using the robots and software available to us now.

Meanwhile, other tasks like managing human employees or doing physical work in a more chaotic environment, such as cleaning up a messy kindergarten classroom, could prove harder to automate with current technology.

This chart shows the estimated average share of time spent by workers in each industry sector on tasks that could theoretically be automated using current technology, according to McKinsey's analysis: 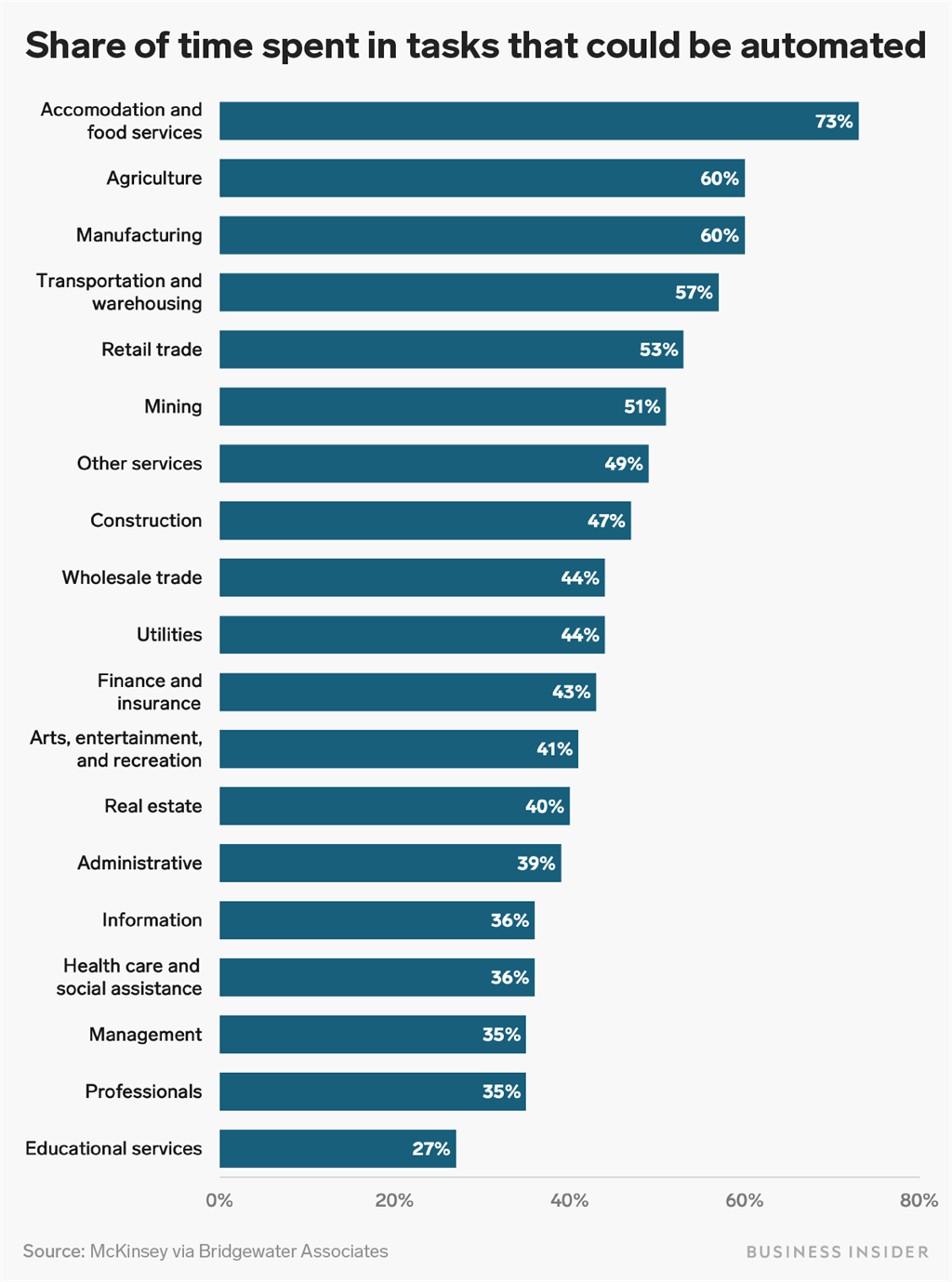 Workers in industry sectors like food service and manufacturing spend much of their time doing physical tasks in a predictable environment, and so are susceptible to automation.

McKinsey pointed out that their analysis focused on what tasks could potentially be automated using current technology, which doesn't necessarily mean that these jobs actually will end up being more heavily done by robots and software.

Other economic and social concerns, like the cost of labour relative to new investment in advanced machines and the public's willingness to have robots do things like serve them food, are likely to be big factors in whether or not various jobs and tasks actually do become automated, according to the report.

The report also noted that increased use of technology doesn't necessarily mean that jobs in these industries could completely vanish.

Few jobs are made up completely of tasks that are susceptible to automation, according to McKinsey, and so if machines start doing the tasks they are good at, humans in those jobs may end up shifting their time to responsibilities that they are uniquely good at.