A day in the life of a personal assistant to the ultra-wealthy, who spends her time tracking down the perfect Cartier watch for a client's wife and planning out a surprise ski trip to the 'Aspen of Japan' When you're exorbitantly rich, you can afford not to fret over things like your 15th wedding anniversary - at least if you're an Insignia member.

Insignia is a personal concierge service for ultra-wealthy individuals that was established in Europe in 1996. The company recently made its way stateside, opening up a New York City office in 2019 to better cater to its US-based clientele.

For the most part, Insignia's US president Richard Lewis told Business Insider, clients mostly use their service to book travel. But the company's fleet of personal assistants can (and do) take care of "any and all requests" a member may throw their way.

Here's what a typical day looks like for Jennifer, one of the personal assistants in Insignia's New York office, from waking up at 7 a.m. and heading into the office half an hour before office hours officially begin to delivering Cartier and Bergdorf's purchases made on an Insignia client's behalf to a Blade heliport in Manhattan.

If she eats breakfast at all before heading out for the day, it's a light one.

Her commute to the office from where she lives in lower Manhattan takes about 25 to 30 minutes by subway, but sometimes more, depending on train delays.

Though work doesn't technically start until 9 a.m., Jennifer aims to be in by 8:30 every morning and starts her day using that first half-hour to catch up on emails and get herself coffee. "Other Insignia employees trickle in between 8:30 and 8:59 a.m. But by 9:01, you're late, because the morning huddle happens at exactly 9 a.m. every day," she told Business Insider.

The "morning huddle" is Insignia's daily all-hands meeting with every single employee, including upper management.

Right now, Insignia (which just expanded stateside earlier this year) has about 10 employees in its New York City office. The company's experts in shopping, travel, and dining are the ones "on the ground," handling client requests in person, while personal assistants like Jennifer coordinate and liaise.

For her first client request of the day, Jennifer has to head over to Cartier to personally pick up a gift. 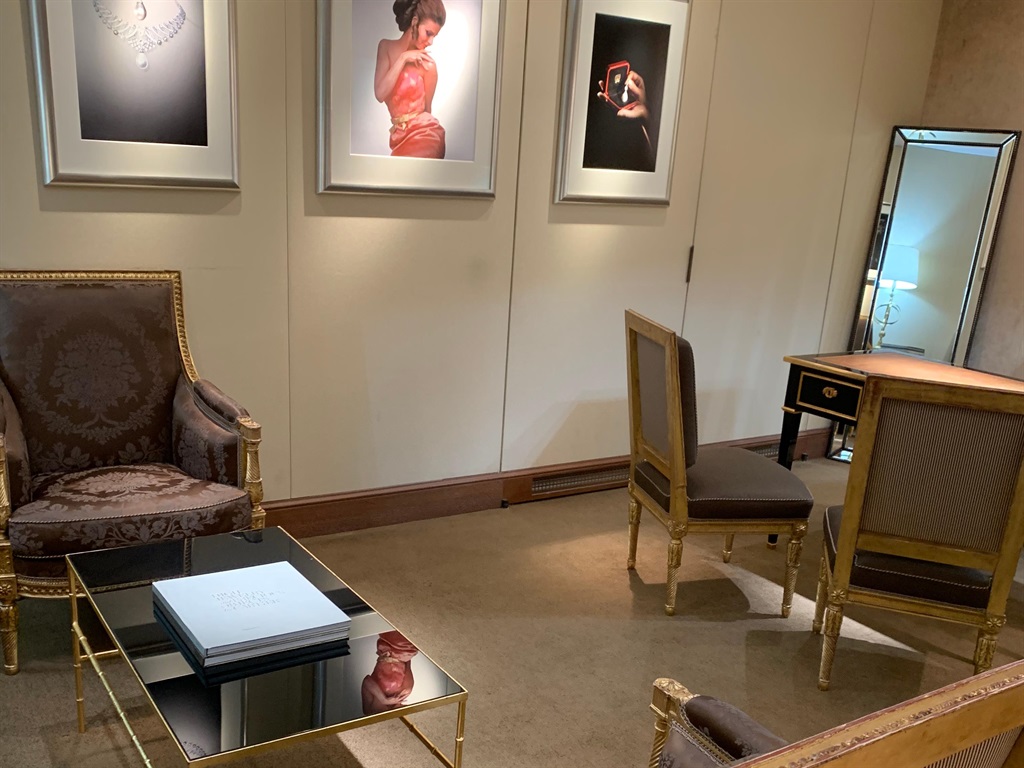 The transaction happens in Cartier's VIP room, a private area for clients who prefer a bit of privacy in their jewelry shopping.

The "very special watch" is a client's 15th-anniversary gift for his wife. Jennifer then heads over to the Polo Bar to confirm a reservation for later that night. 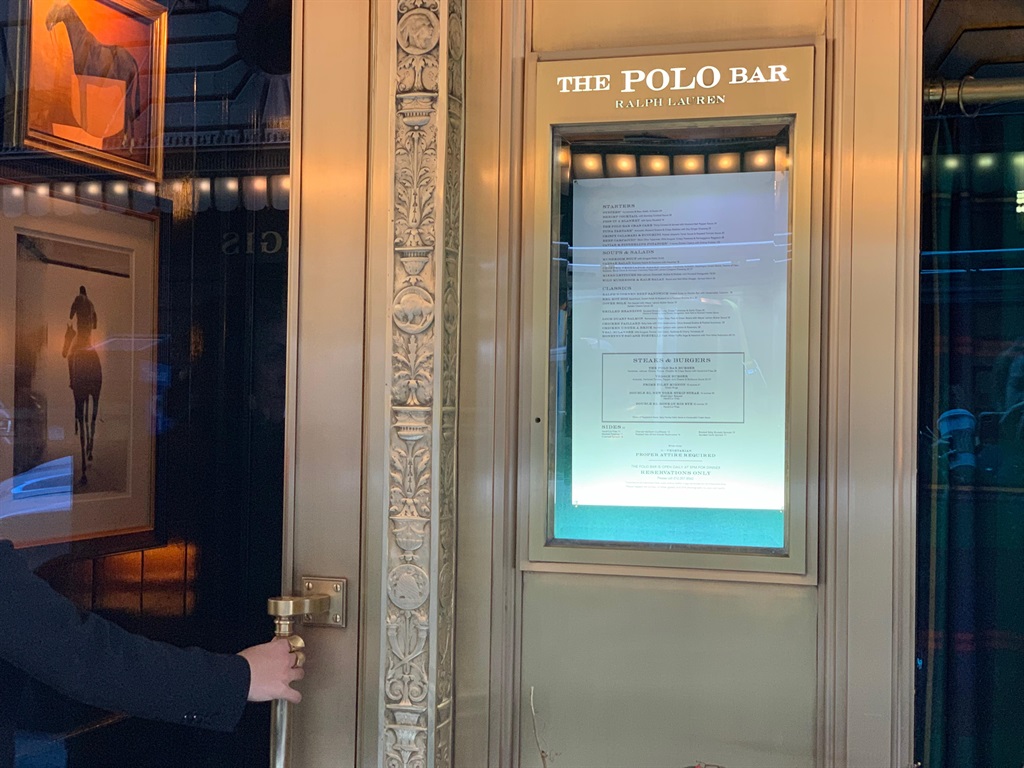 The Polo Bar, designer Ralph Lauren's first restaurant in New York, is considered one of the city's most popular (and exclusive) restaurants. The swanky midtown establishment on East 55th Street serves classic American dishes and opened in January 2015.

Grub Street's Sierra Tishgart reported shortly after its 2015 opening that the restaurant had New York's "toughest (and most irritating) door policy."

"Unless you're a known VIP, it's nearly impossible to get a table - or even a seat at the bar. To merely step foot inside the Polo Bar, a reservation is required," Tishgart wrote. "And if you call for a table, there's at least a one-month wait."

On Jennifer's agenda for the day: confirming that her client's favorite table at the Polo Bar - "a circular table corner booth, further back and away from the hustle and bustle" because the client and his wife "don't like to be near the kitchen or swinging doors" - is indeed available. She also makes sure to preorder a bottle of Dom Perignon, the wife's favorite Champagne.

After the Polo Bar stop, it's back downtown to the office. Jennifer stops at Starbucks on her way back to Insignia's New York headquarters. She told Business Insider the afternoon refuel is "a must." Her usual order? A hot grande drip coffee with extra almond milk.

Jennifer is able to handle her third client project of the day from the comfort of Insignia's office. She's tasked with researching "the hottest ski resorts" in Japan for another Insignia member's upcoming trip.

Japan has become a popular alternative to the Alps in recent years, Business Insider previously reported in 2017. The country's largest resort is Niseko, an area on Hokkaido (Japan's northernmost and second-largest island) renowned for its consistency and quality of powder snow throughout the winter season.

In February, Business Insider's Marissa Perino called Niseko, "the Aspen of Japan," an up-and-coming hotspot, noting that while it's already replete with plenty of high-end chalets, a number of well-known luxury hotel brands also have plans to move into the area.

Next up, Jennifer heads over to Bergdorf's to pick up a jacket. The option she settles on for the client's "surprise ski trip to Japan" is a fur-lined coat. It cost around $4,000, Jennifer told Business Insider.

With the anniversary gifts from Cartier and Bergdorf's in hand, Jennifer heads off to one of Blade's Manhattan heliports to hand off the gifts to the member. Blade is an app that allows users to hire chartered, private, or shared short-distance helicopter flights to airports and other nearby destinations. It's a favourite transportation option among Insignia's ultra-wealthy clientele.

By then, it's the late afternoon and Jennifer heads back to the Insignia office. After the meeting, Jennifer changes into more formal attire and heads off to the Plaza Hotel for a private member event. The event, which runs from 7:30 p.m. to 9:30 p.m., is held in the Plaza's Rose Bar - a "favourite" venue, according to Jennifer. She was on hand to ensure the client's event ran smoothly.

In addition to assisting with client-led events, Insignia also regularly gives back to its members by hosting seasonal member-appreciation events. "The member appreciation events happen once per season. Our clients travel so much, so it's when the clients are mostly going to be in New York," Jennifer told Business Insider. "The location of the event changes each time. Insignia has a pretty small roster right now (due to onboarding and exclusivity), so there are about 12 to 15 total members and their spouses and guests in attendance at these events, along with the majority of Insignia's New York-based employees."

During the event, Jennifer has to step out to field an urgent client request. It's not unusual for emergencies to come up at the last minute, and personal assistants need to be on the ball and ready to handle them anywhere, anytime. In this case, it was a missed flight - a common issue for clients.

"The majority of the time when it's an emergency, it's something to do with aviation - either a private jet or commercial flight," Jennifer told Business Insider. "From there, it's just about damage control and trying to get them to their destination."

In the end, this client's travel issue was worked out quickly and relatively painlessly: "We set up this Insignia member to take a helicopter to a different airport and catch a new flight. It was out of JFK originally, and they were helicoptered into Newark. I called Blade to get the pickup and dropoff coordinated. From start to finish, resolving the issue took about 90 minutes."

And that's a wrap! After the event concludes, it's time for Jennifer to head home for the night. Due to the lateness of the hour, she opts to splurge on an Uber down the West Side Highway.

Not every day is this long for Jennifer - this particular one ran long because of the event. But the number of requests (generally three or four major ones per day) is relatively normal.

"Personal assistants generally try to head out at 6:30 p.m., but if a client is traveling or a PA wants to tee things up, maybe 7:30 or 8 p.m.," Jennifer told Business Insider. Of course, with Insignia's US-based members (the majority of whom are regularly traveling to Europe for business or pleasure on a weekly basis), it's not unusual to receive middle of the night emergency calls.

"I get 3 a.m. calls three or four times in a week," she explained. "PAs work a lot at home, and it's standard to keep your phone on and laptops open at home. You're basically on call at all hours, with your cell phone on the nightstand kept on loud."

While there's a control department in Europe who sits in front of the travel requests for the duration of a client's trip to give them alerts and coordinate movement, personal assistants will often try to have a "plan B" in place ahead of time "for certain clients" who are more prone to last-minute travel changes.