As a deadly coronavirus spreads across China and ripples through other parts of the world, scientists are trying to pinpoint how humans first got exposed.

So far, they know that the virus is zoonotic, meaning it jumps from animals to people. And genetic research has all but confirmed that it originated in bats. But scientists believe that another animal likely served as the intermediary between bats and humans.

That animal could be the pangolin, a scaly, nocturnal mammal with a tongue longer than its body.

A group of researchers from South China Agricultural University found that samples from coronavirus patients were 99% identical to samples of the virus taken from wild pangolins, according to China's official Xinhua news agency. Their research hasn't been published or confirmed by other experts, but scientists say the results make sense, given what we know about the animals.

Pangolins are often poached for their keratin scales, which used as ingredients in traditional Chinese medicine. Their meat is also considered a delicacy in China and Vietnam.

If bats drop feces or saliva onto food that's consumed by a pangolin, the animal can become a carrier of the coronavirus. Humans can then be exposed by consuming pangolins before the virus is transmitted from person to person.

What we know about pangolins so far

Despite their forced interactions with humans, pangolins are mostly solitary in the wild. With the exception of one species, the long-tailed African pangolin, the animals spend most of the day sleeping in hollow trees or underground holes. At night, they hunt for insects such as ants and termites with their long, sticky tongues, which can stretch up to 16 inches.

Pangolins don't have any teeth, but they rely on other features like their sharp claws to dig through insect mounds or strip away the bark from trees. They also have powerful tails that can support them when hanging upside-down from branches.

Pangolins meet up once per year to mate, but babies are abandoned by their mothers after about two years. As the animals get older, their soft, white scales begin to harden and grow darker. Scientists believe pangolins are the only scaled mammal.

When a predator approaches, the animals can curl themselves into a ball and tuck their faces underneath their tail to protect themselves. But those defense mechanisms are no match against poachers.

Pangolins are illegally traded for their meat and scales

Though a pangolin resembles an anteater or armadillo on the outside, it's actually more closely related to an order of mammals called "carnivorans," which include the bobcat and the civet. Civets were responsible for passing SARS from bats to people in 2002.

Both civets and pangolins are sold in Chinese wet markets, which put people in close contact with live and dead animals. It's not clear, though, whether pangolins were sold at the seafood market in Wuhan, China, where the new coronavirus likely originated. 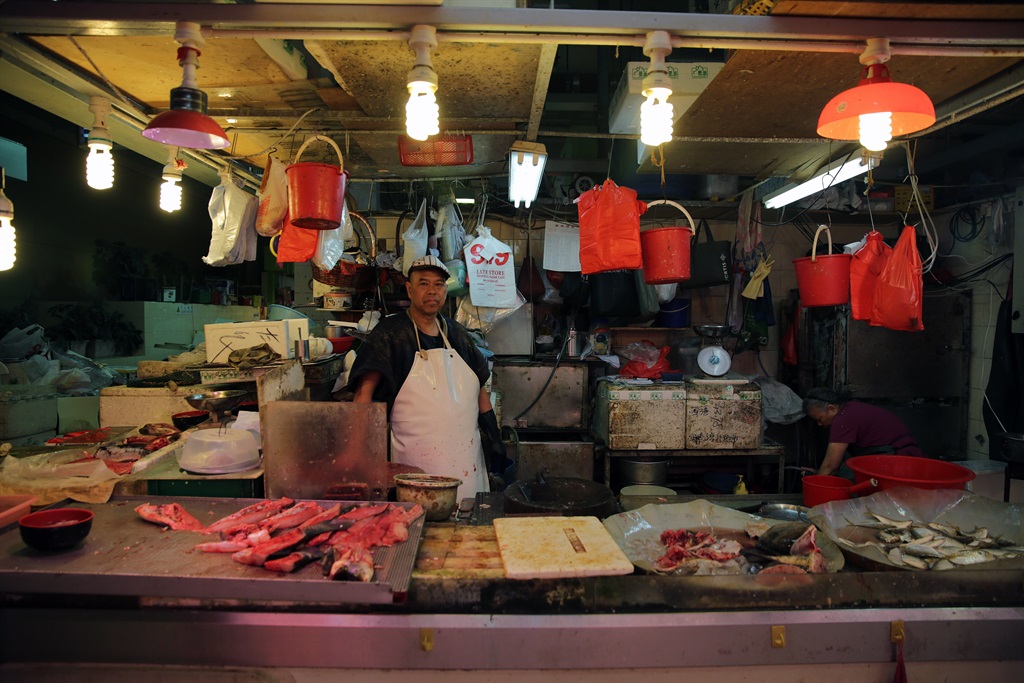 A worker waiting in a seafood stall in the Wanchai wet markets in Hong Kong, China.
Isaac Lawrence/AFP/Getty

Multiple investigations have revealed, however, that pangolins are still traded illegally, despite the practice being banned by the Convention of International Trade in Endangered Species in 2016. In fact, they're often considered the world's most trafficked mammal - around 100,000 of them are plucked from the wild each year.

The China Biodiversity and Green Development Foundation, a Beijing-based non-profit, found that more than 200 pharmaceutical companies still use pangolin products for around 60 commercially-produced medicines.

All eight pangolin species are now threatened with extinction, and at least three species - including the Chinese pangolin - are listed as critically endangered by the International Union for Conservation of Nature.

As a result, pangolin scales tend to fetch a high price: around $2,200 per pound in the US. But the animals still aren't widely recognised among the general population.

"That's one of the problems with species like pangolins," Annette Olsson, a technical adviser for Conservation International, told the New York Times in 2016. "It's not huge and not very charismatic. It's small and weird and just disappearing."

If pangolins do turn out to be the intermediary-species for the new coronavirus, that could make it tough to determine how the animals passed the virus to humans.

"If the illegal animal trade was at the root of this outbreak, it is going to be really difficult to trace, and I suspect most of the evidence is gone already - destroyed or spread out across the black market," Benjamin Neuman, a virologist at Texas A&M University, told the Washington Post. "People aren't going to want to talk, because of the consequences."

Related Links
With more than 800 dead, the Wuhan coronavirus has killed more people than the SARS outbreak
There's a good chance the Wuhan coronavirus will never disappear, experts say. There are only 3...
China is sending trucks to spray bleach on entire cities as the country struggles to contain the...
Next on Business Insider
Mar-a-Lago raid: What we know so far about the search of former President Donald Trump's home and resort