What happens now Parliament has rejected all alternatives to May's Brexit deal? Theresa May in Egypt to meet with EU leaders.
Getty

LONDON - Members of parliament have rejected all softer alternatives to Theresa May's Brexit plan, meaning Britain remains in a state of political deadlock.

MPs voted narrowly to reject the options of retaining a permanent customs union with the EU, remaining in the EU single market, holding a second referendum and revoking Article 50.

So what will happen next? MPs during a debate on indicative votes on Brexit in the House of Commons, 27 March 2019.
UK Parliament / Mark Duffy

Cabinet will discuss the government's next steps in light of Monday evening's results. Under consideration is a fourth meaningful vote on the prime minister's deal; a "run-off" between her deal and a softer Brexit; or an attempt to introduce the Withdrawal Bill through legislation.

Cabinet will also inevitably discuss a general election. Why? Because the prime minister has already warned that asking the EU for a softer Brexit will break the Conservative party's manifesto promises in 2017. The prime minister dropped a heavy hint on Friday that an election could be in the footing, telling MPs she feared "we are reaching the limits of the process in this House".

The backbench plan to seize control of Brexit hands MPs time on Wednesday for one final attempt to try and find a Brexit alternative that can win a majority.

Jeremy Corbyn called for a third round of votes following the failure of Monday evening's second attempt, saying: "The margin of defeat for one of the options tonight was very narrow indeed and the prime minister's deal has been rejected by very large majorities on three occasions."

Those behind the indicative votes plan could introduce a preferential voting system which forces MPs to vote on their preferred option from a range of three or four. They are also considering a plan to add a second referendum to a customs union plan to see if that can command a majority.

A fourth vote on May's deal?

The numbers of MPs voting against Theresa May's Brexit deal with the EU have been reduced at each time of asking but there is still no clear majority for the plan.

The DUP remains implacably opposed to the Withdrawal Agreement and significant numbers of Tory Brexiteers are unlikely to budge. In fact, some who voted for the deal on Friday, including Tory MP Richard Drax, have now said they would vote against it one more.

The number of Labour MPs prepared to rebel on Friday against the whip to vote for the government was just 7, significantly below the figures Downing Street needs to win a majority. Theresa May could try to win over but it remains unlikely there is a majority for her current deal. Theresa May and the Conservative frontbench await the result of vote on her Brexit deal, March 12, 2019.
UK Parliament / Jessica Taylor

Monday evening's indicative votes illustrate Theresa May could potentially win a majority if she softened her deal, particularly on the customs union, which was defeated by just 3 votes.

The EU would be willing to add a customs union or single market membership to the current withdrawal agreement, and the process would take just days. If (and it's a big if) the prime minister did decide to implement a softer Brexit, the UK would very likely be able to leave the EU in an orderly way somewhere in mid-May, without needing to participate in the European elections which Theresa May is so desperate to avoid. 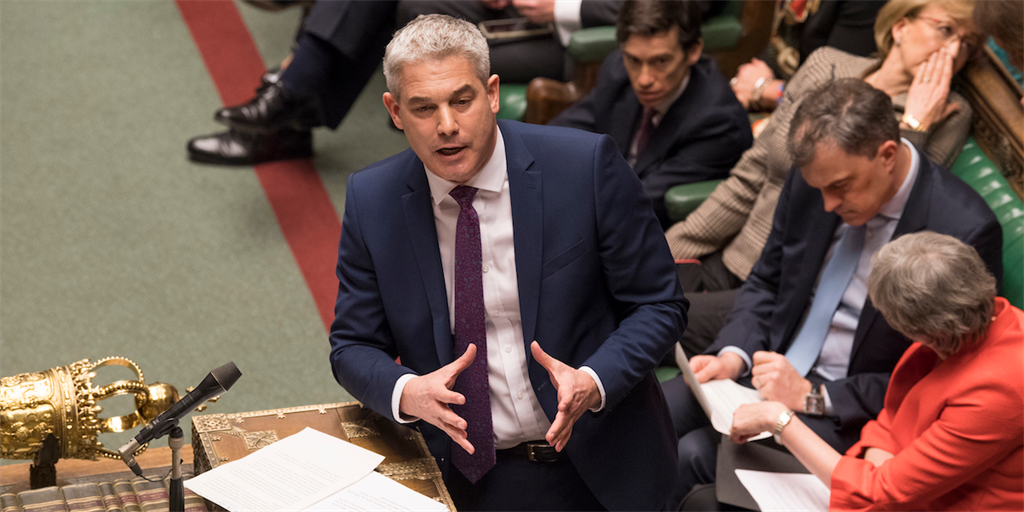 The problem with a softer Brexit is that Theresa May doesn't want one. She has repeatedly said it would break the promise she made to voters to leave the customs union in the 2017 election and senior ministers including Brexit secretary Steve Barclay have suggested the government would need to call another election before it could implement a different kind of Brexit deal.

That is why many believe the government will inevitably need to ask for a longer delay to Brexit. The UK is currently scheduled to leave the EU on April 12 and May has already indicated that she believes parliament would be able to block a no-deal Brexit.

If the UK is to avoid crashing out from the EU without a deal, it will need to ask the EU for an extension before April 10.

It will be painful to many MPs who do not wish to participate in European elections but they could decide the alternatives are worse.

The UK would also need an extension to hold a general election, which many Tory MPs believe is now inevitable.

Whether May remained in charge would be a question for the prime minister and her colleagues.

Ultimately, Theresa May could face a binary choice: soften up her Brexit deal and leave the EU in May, or ask for a long extension to allow the government to thrash out a different plan.