Breast implants have been linked to a rare form of cancer called breast implant-associated anaplastic large cell lymphoma, or BIA-ALCL, but for years, women have been reporting that their breast implants also cause nebulous health issues like nausea, fatigue, and pain. Some doctors and patients believe there is a condition called "breast implant illness" that's characterized by the aforementioned symptoms.

While there are no tests to diagnose this illness - and plenty of doctors say it's not real - women have testified in front of the Food and Drug Administration, sharing stories about how their symptoms disappeared after getting implants removed.

Some of these women were patients of Dr. Jae Chun, a Newport Beach, California, cosmetic surgeon who focuses on the removal of breast implants and residual materials (known as an "explant").

Here's what it looks like when Chun removes implants from his patients.

Dr. Chun is a plastic surgeon who has been doing breast reconstruction procedures since the early 1990s. Chun was filling in for an injured colleague who did explant surgeries when he started hearing from patients about their negative experiences with implants.

In 1990, around the time Chun began performing explant surgeries, journalist Connie Chung shared stories of women who claimed they had a mysterious "breast implant illness" on a CBS broadcast.

Although Chung's reporting was criticized as fear-mongering at the time, Chun said it created a buzz about the risks of breast implants and propelled his explant surgery business into what it is today.

Chun now has his own private practice where he focuses on breast implant removal and reconstruction procedures. "Strangers around the world are exchanging their stories and finding commonality among these stories [about their symptoms]," Chun told INSIDER. "Women taking [breast implants] out are saying 'I feel better with them out' after being told it was menopause or nothing to do with implants." The procedures take 2.5 to 3 hours each, since Chun removes not only the breast implant, but any surrounding scar tissue too.

Other explant doctors don't always remove excess scar tissue (also known as a capsule) from the body during surgery, according to Chun. But he believes doing so is necessary for a full recovery.

"When you look at silicone implants and the manufacturers' warnings, they will tell you even if the implant isn't ruptured, silicone molecules leak out and then the next layer is that capsule." He said that he believes the capsule layer can cause adverse reactions just like the implants can.

Capsules can be thin and resemble wet toilet paper in the body, so removing them is quite difficult. "It's like trying to peel wallpaper off the wall, but it's made of toilet paper, which makes it hard to peel that thin flimsy layer off," Chun said.

Some of Chun's patients have had previous explant surgery elsewhere but come to him to remove the scar tissue, as they still report health issues following the initial procedure.

In one Instagram post, Chun showed the capsules he removed from a patient who already had explant surgery in 2011. "So after 7 years, capsules were still there and not 'absorbed or dissolved' as some claim," Chun wrote.

Breast implant manufacturers say that the materials from ruptured breast implants, like silicone gel and saline solution, are safely absorbed into the body so only the implant needs to be removed if ruptured. "I believe it's your body reacting to the silicone, but not like it's a poison or toxin. It's like penicillin. A certain percentage [of people] just can't tolerate those materials because their body can't take them," Chun said.

As a result, the body might have an inflammatory response - a sign it's trying to get rid of the implant, according to Chun.

At this point, the illness has only been self-reported by women. Chun said this is due in part to the absence of diagnostic testing for the condition. If a person plans to have breast implants for life, chances are those implants will have to be replaced at some point. According to the FDA, the longer a person leaves the implants in, the greater the risk for complications.

The lifespan of implants vary, but only "few people may keep their original implants for 20 to 30 years," the FDA wrote.

This patient's implants, shown above, were 40 years old, and one ruptured inside of the body. As a result, Chun removed the implants and the surrounding scar tissue.

Here's a closer look at a ruptured gel implant. Breast implants have a silicone outer shell and can be filled with either silicone gel or saline solution. Implants can also have a textured surface or a smooth surface.

When an implant ruptures in the body, it can go undetected. The only way to know for sure if an implant has ruptured is through an MRI. For this reason, the FDA recommends getting an MRI three years after getting either type of breast implants, and then every two years following the initial MRI.

Following implant removal, Chun repairs the loose skin and reshapes the breast tissue to give it a natural look. After breast implants and any capsules are removed from the body, Chun reshapes the sagging breast tissue to give each patient's breasts as natural a look as possible.

"It's like losing a lot of weight and looking at old clothes that are too loose and baggy," he said.

Many of his patients have had breast implants for years, so it is impossible to make the aging skin look like it did before implants. "No one has 20-year-old skin anymore. It'll be looser, a little more aged," he said. "But I'll get you where you would've looked at this age if you didn't stretch [your breast] out [with implants]."

Read more: Half of women with maternal depression are undiagnosed and untreated. New screening recommendations aim to change that

Chun is encouraged by the recent FDA hearings. 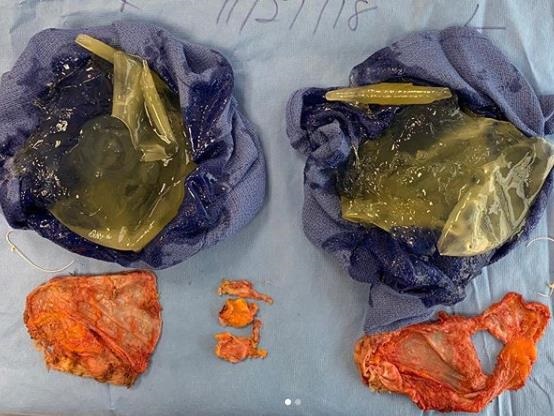 "Eventually someone is going to blow the whistle and say, 'Hey, that's not quackery.' People having the [explant] surgery are the drivers. A lot of women testifying in front of FDA are my patients, " he said of the recent hearings about breast implant risks. "There is no scientific research published in any credible medical journal that identifies a link between breast implants and any other generalized symptoms as described by some women online," Daniel Maman, M.D., a board-certified plastic surgeon told Shape magazine. "There are more people walking around with breast implants than any other medical device, including cardiac pacemakers, so if 'breast implant illness' was a cause for concern, we'd know about it already."

Even Chun isn't completely against breast implants, however. "I'm not a manufacturer who says [implants] are the holy grail of artificial material and no one can have any problems ever, but I'm also not saying they're poison and the devil's instruments," Chun said.

Instead, he thinks that different people have different reactions to the devices and should weigh the risks and benefits before getting implants.