The demand for Yebo Fresh’s service is so great that they are looking to expand nationally.

The organisation delivered its first food packs in 2018, after founder Jessica Boonstra brought her learnings from the online retail space in the Netherlands to South Africa.

But instead of taking on the food delivery companies that service South Africa’s wealthy suburbs, Boonstra found a new opportunity in the Western Cape’s townships - one of the biggest, and ironically most underserved, markets. “I felt that the areas in South Africa which would benefit the most from an online shopping transformation would be townships, which are still largely underserved by big retailers. People living in townships often lose hours of their day, most relying on overcrowded public transport to go to a supermarket,” says Boonstra.

Buying groceries and then transporting them on public transport into a township is a complex and often costly process for residents. And so in 2018 Boonstra developed Yebo Fresh - a system that allowed households to order goods online, via Whatsapp, or over the phone with a call-back feature, and have them delivered to their doors. It’s not a service without its challenges. Boonstra points out that many houses in townships do not have formal addresses, and so drivers must use mobile and GPS technology, and hyper-local knowledge to navigate the streets.

“There is no way that a business such as ours could exist without mobile technology, smart backend systems, extensive data analysis and a constant drive to optimise our performance,” she says.

“Our drivers will stay in close contact with head office via GPS tracker and via mobile phone with the customer, who is often able to provide detailed instructions such as ‘turn right at the green container, then I will meet you opposite the hair salon.”

Where possible the delivery teams come from the communities they serve, and so are familiar with the local landmarks, can speak in the customers’ mother tongues, and have a strong community footing so they are comfortable operating on landmark-specific instructions.

Boonstra says there are a lot of misconceptions that businesses have about operating in South Africa’s township space - and as a result many have failed to capitalise on the opportunities that this market presents.

“The townships represent at least 40% of the national grocery market, with great entrepreneurship and beautifully creative solutions, such as conducting a wide range of activities via Whatsapp,” she says. "We see massive potential in some of South Africa’s underserved areas. We believe in providing people with good access to good food, and your location shouldn’t have an impact on that." 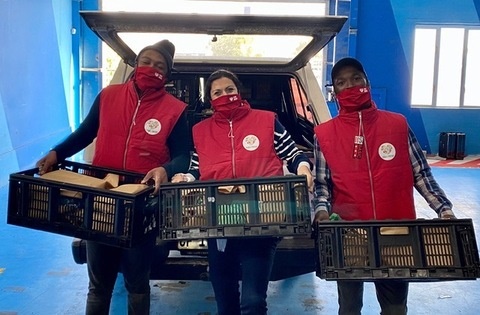 The organisation works closely with many non-governmental organisations to provide “efficient, localised, transparent and well-administrated sourcing, packing and delivery” of food within their target market.

“This is critical if you want to maximise the output of every rand spent and feed as many stomachs as you can,” Boonstra says. “Because of our scale effect, supplier relationships and smooth operations, it is a lot cheaper for any charity to use us rather than fill trolleys at a retailer and pack themselves.”

The company also works to up-skill people living in townships.

“We have created at least 50 new jobs for people living in the townships that we serve - packers, drivers, team leaders, sales staff, and administration. We have discovered some wonderful talent!”

The need for Yebo Fresh’s services has also increased dramatically since the start of lockdown. Boonstra says queues at township grocery stores can now last up to six hours, and many people have not even been able to travel out to local shopping malls or supermarkets, which has heightened the need for delivery options.

In early March, the company was receiving a few hundred orders a month, and only delivered on Saturdays. Once lockdown hit they had to rapidly increase their pace.

“Business has boomed significantly, and now we manage thousands of orders every single day. We went from having one, to two, and then three warehouses, before moving into one large space - a 2,400 square metre warehouse - where everything now takes place,” says Boonstra.

The company has also seen a shift from people initially buying food for themselves, to family members and employers using the service to send groceries to someone they care about. And since lockdown began, Yebo Fresh has shipped 65,000 food parcels to non-profit organisations, which Boonstra says equates to more than 4 million meals.

The company is optimistic about its future - and has plans to expand.

“Considering that the areas we operate in have very large populations and are significantly underserved by retailers, there are business opportunities in this market, but it does require a different approach, and one that is flexible and creative,” says Boonstra. “A business needs to respond to what works best for the community, rather than try to implement an existing way of operating."

The success of Yebo Fresh in Cape Town has prompted requests for it to expand nationwide, which is something the company is considering for the future.

But for now, Boonstra and her team are focusing on serving their existing markets, and are encouraging more people to consider the business opportunities that exist within them.

“We would love to see more players entering the township food market,” she says. “It is not easy for sure, but this is a market that deserves innovation and a broad range of offerings.”