Woolworths Dash came more than one year after Checkers unveiled its own native same-day app, and several months after Pick n Pay snapped up Bottles to offer a similar service.

But almost as soon as it launched, Dash was pilloried on social media and in app-store reviews. In its first month the iPhone app has attracted more than 20 one-star reviews, and the Android equivalent is rated just 1.9 out of 5, after 208 reviews.

Sixty60 launched with an audacious promise to deliver groceries within 60 minutes, but Dash was less ambitious. Instead of guaranteed delivery within an hour, Dash users are required to pick delivery time slots in 60 minute segments for the day ahead.

As multiple users have pointed out, securing an actual slot has been a near impossible task.

@WOOLWORTHS_SA Woolies Dash - serious brand fail! You go through the entire process of selecting and ordering only to be told on checkout that there are no delivery slots available. Back to Checkers60/60 we go.

Woolworths has been at pains to point out that the app is still in its trial phase, and that it has deliberately limited time slots. It did not explain why the app also came with a host of design and notification failures, some of which have since been fixed.

Please can the developers at @WOOLWORTHS_SA fix the dash app so that the cart is saved! I spent half an hour creating it this morning but no delivery times were available. Found out now when checking to add an item to@order tomorrow that the cart is empty ????‍?? #fail

So has anyone been able to place a @WOOLWORTHS_SA Dash order yet? I haven’t seen an available slot since Christmas. (At least they now show it before checkout. Yeay.)

After weeks of trying, Business Insider South Africa was finally able to secure a slot and fully test the service. Given the complaints, and our own battles with the earlier versions of the app, our expectations were low.

Here's what happened when we tested Woolworths Dash with an eclectic mix of items.

Delivery will cost you R15 more than Checkers, normally – if you can find what you are looking for

To secure a time slot, we had to place our order first thing in the morning, and move fast. Just after 08:00, a moment's hesitation saw a slot two hours later disappear, and we had to settle on an early afternoon delivery instead. After initial complaints, there is now a large banner on the opening page about the preliminary nature of the service. Every email also makes it patently clear that you are using a work in progress.

Below the banner warning that this might not be a seamless experience are categories that appear as simple black and white icons, for things like Beverages & Juices; Bread, Bakery & Deserts; and Deli & Entertaining. It lacks the quirk of Sixty60s' groupings, but it works.

Most things are in stock, including Woolworths favourites like readymade meals and hot food from the deli counter. Our local Woolworths also gave the option to purchase fresh sushi (though that was sold out), and a variety of house plants and cut flowers – perfect for forgotten birthdays or anniversaries.

Woolworths seems to have taken the kitchen-sink approach, and tried to recreate an in-store experience. We found the catalogue of items available to be extremely comprehensive, from niche sauces and ingredients, through to staples like bread and milk.

This is helpful if you know exactly what it is that you want to buy; you can enter the products into the search bar at the top and it’s accurate enough to make ordering them a breeze. But shopping on an app is clumsy at the best of times, and without expert navigation, carefully grouped categories, appropriate tags, and smart suggestions, the experience can quickly devolve into a clumsy and frustrating one if you are trying to browse options.

Unlike Sixty60, Dash also appears to take itself very seriously.

A nice touch in the ordering process is the filter options for each category. These allow you to sort by several variables, including price. Tap on the sub categories, though. and you may be overwhelmed with options that aren’t entirely intuitive. Quite how many users would venture into Bread, Bakery & Deserts looking for Teachers Gifts, or what exactly those would be, for example, is unclear, and an added click to find out is another frustration.

Still, adding items to your cart is quick and easy, especially if you have a basic list at your disposal, as is changing quantities.

The checkout process is also rapid, and for now, at least, all orders over R75 get free delivery “as a thank-you for helping us test and polish our service”. Order below the threshold and you’ll pay R50 for delivery - which is R15 more than Sixty60's delivery fee.

There’s also no option to tip the delivery driver, a feature that Checkers only added several months later. Before paying, shoppers have the option to pick alternatives, a feature that Woolworths calls “substitutions”, for out of stock products. Users can roll the dice and let the in-store shopper choose, choose a substitute themselves through the app, or pick “recommend a substitute to me”, though selecting the last option doesn’t provide any further details.

Unlike Sixty60, the substitution algorithm appears to still be learning which products are alike, so rather than recommending different quantities or brands of the same product, you’re instead presented with a search bar and a long list of items in the same broad category.

Our delivery was early, which could have meant disaster for an ice lolly

Shortly after 13:00 we received a push notification to say that shopping had begun. The alert also included our personal shopper’s name, a nice touch that adds a strange element of prestige to the process.

Moments later we received a WhatsApp call from an unknown number, the in-store shopper, who was calling to clarify some substitutions. That Woolworths provided our phone number directly to the shopper, who then contacted us directly from her own private number, is a potential privacy concern to some, and an in-app notification or messaging system, or at least a Woolworth's profile picture, may be a slicker and more reliable way to perform this check.

Nevertheless, the shopper was polite and efficient and offered good alternative suggestions.

Included in our order was a variety of products designed to test the limits of the product range on offer, the delivery process, and Woolworths’ promise of “stay-cold delivery”.

Aside from a few predictable staples, we ordered a full potted basil plant, some plant food to keep it satiated, a samosa from the hot deli counter (entirely for temperature control purposes), and an ice lolly from the frozen section. Aside from two flavour variations, resolved with the conversation, all other item were in stock.

Quite how the shopper was going to keep a fragile ice lolly frozen in Cape Town midsummer heat, with 45 minutes still to go before the delivery slot, was intriguing – but all was revealed when the driver arrived unannounced by the app some 20 minutes before the agreed delivery time. Fortunately for the frozen lolly, we were able to take delivery outside of the agreed upon time.

The ice lolly made it, but the basil was a disappointment

The products arrived in two plastic bags (which Woolworths says it will soon replace with paper), one with room-temperature items, and one packed in a soft cooler box, which Woolworths calls an innovative “flexible cold-chain carrier bag”, and that you don't get to keep. 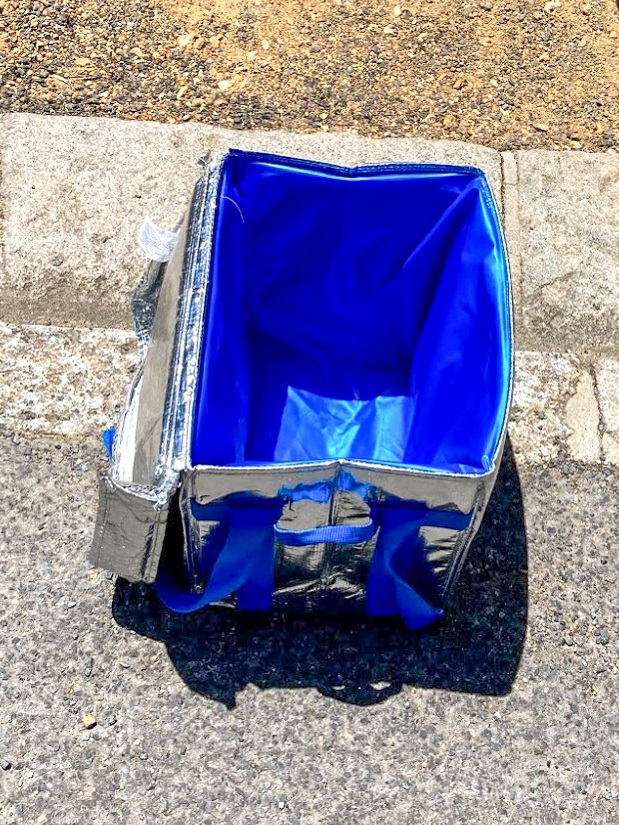 Calling the cooler bag a “game-changer” and “first of its kind for a retailer offering same-day delivery in South Africa” might be a slight overstatement - but when we unpacked our goods 30 minutes after the shopper had placed them in the cooler box, the temperamental ice lollies were still pleasantly frozen solid.

Other cold items were also at a suitable temperature, while the samosa was no longer the lukewarm item we’d have expected from a deli counter, and instead had equalised with the warm summer conditions experienced in the back of a scooter. The ice lollies (still frozen), and the samossa. The intact but disappointing basil plant

Aside from a container of fresh thyme arriving entirely inedible – a consequence, maybe, of not being able to judge and personally pick the freshest stock to our own standards – the remainder of the items arrived in good shape. The basil plant, though wilted and a bit insipid, arrived right side up, and with soil still in place.

In all, the Dash process was relatively seamless, and although we were underwhelmed by still having to fight for a delivery slot, confused by the sudden early arrival of the order, and disappointed by the quality of two fresh produce items, we were impressed with the cold storage and sheer range of stock available on the app.

Dash will, however, take some time to reach the level of comfort and seamlessness of Sixty60.

To be fair, Checkers has been tinkering on its app for over a year, and once Dash has ironed out the kinks, the staunch Woolies loyalists are likely to forget the initial annoyance, especially when they realise they can have a sushi plater and a large bag of Chuckles dropped directly on their doorsteps.

Until that stage, however, we'll be happy to continue using the competition.