KFC has somewhat subtly slipped their Spicy Chips - a collaboration with hot sauce maker Tabasco - back onto their menus in South Africa.

The side dish of traditional KFC slap chips, lathered in a Tabasco-flavoured salt, seems to have made its first appearance in July last year - but perhaps because of its limited store roll-out, the chips failed to light up social media, and intestines, as the company may have wished.

But in a short video last month, KFC teased the return of their Spicy Chips, this time with a wider store distribution - and a 25% price increase.

We tried the chips, and found that the salt may well be addictive.

But the quality of the chips, and the vast array of ingredients used to make the salt they’re swimming in, means they’re unlikely to leave you feeling particularly good about yourself afterwards.

The Tabasco salt is potent, and admittedly delicious - were it used in appropriate quantities on chips that had a bit more life in them than the limp amalgamation we found languishing in the bottom of the paper cup.

But if confronted with the unlikely decision of these versus normal KFC fries in the future, we’d likely lean towards Spicy for their novel flavour kick.

Here’s how our experience of the new KFC Spicy Chips went:

Braving a KFC mid-pandemic, at lunch hour, was, in our experience, not particularly enjoyable.

We therefore returned the following day, at 10:30 - an admittedly weird time to enter a KFC to order a single portion of Tabasco flavoured chips, but decidedly more practical if you’re into social distancing.

We found that the Spicy Chips now have pride of place on the store’s overhead menu: There are no sizing options, and the pricing also indicates an increase from last year's offering. A single portion is now R14.90, instead of 2020’s R11.90, which represents a 25% increase. At this price they’re still not going to break the bank - but by way of comparison, a small portion of regular KFC chips will set you back R9.90.

Our Spicy Chips took all of 30 second to appear from the back kitchen, and came served in packaging KFC fans will instantly recognise as a Sprinkle Pop’s cup with plastic lid - which already revealed secrets about what lay beneath. It’s just as well that the chips are sealed from outside elements - because as soon as we removed the lid we experienced an all-out olfactory assault that given the surprise had us recoiling in confusion but returning with intrigue.

Once acclimatised to the strong scent of vinegar, we got close enough to peer inside the cup.

The chips unsurprisingly immediately struck us as different to that of the marketing material, which presents them as a cup brimming with “KFC’s gold and crispy French fries dusted with Tabasco flavoured sprinkle”.

Instead, they looked somewhat less enticing - though not that different to how you’d expect most KFC or, to be fair, fast food, chips to arrive. 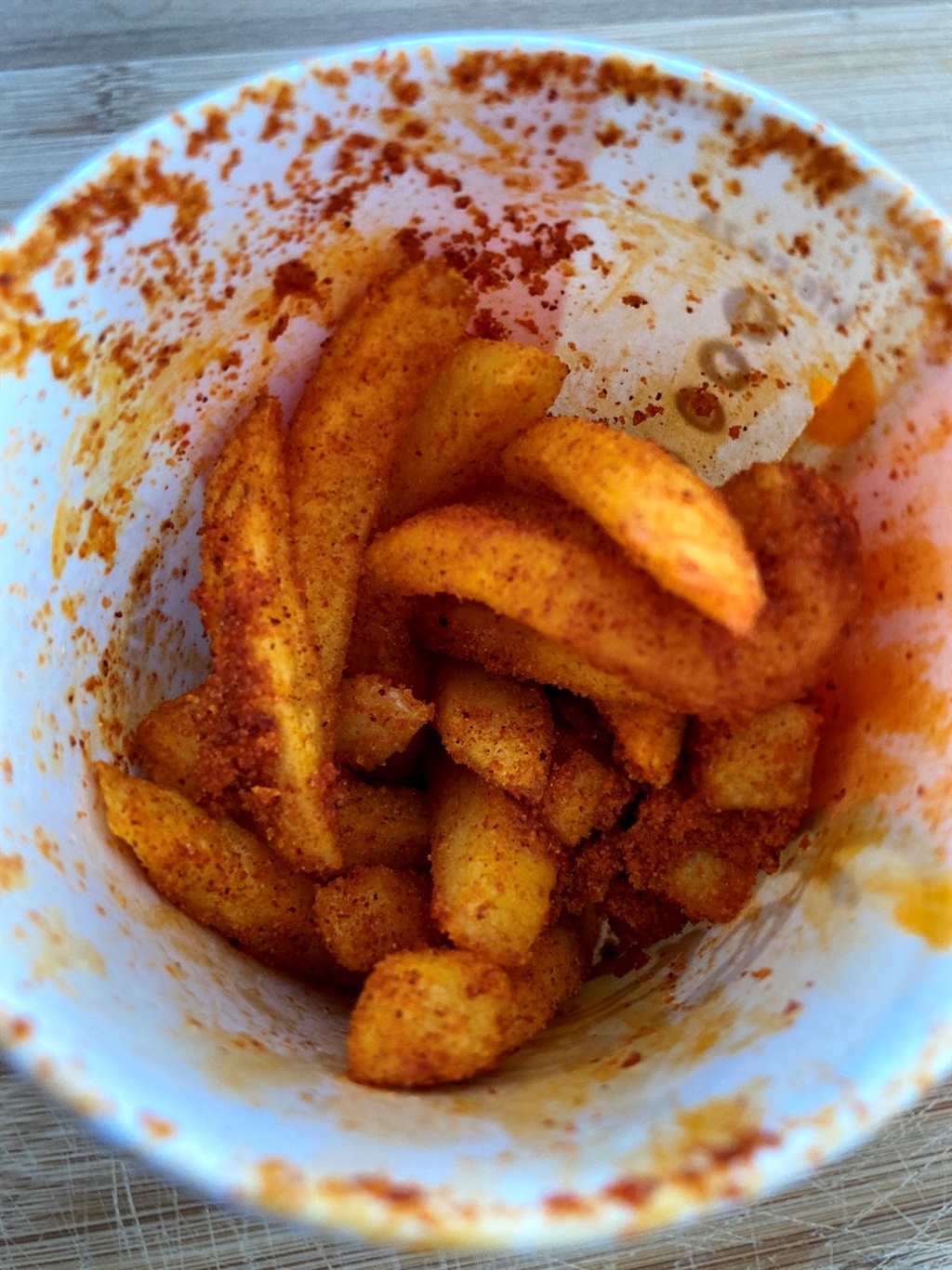 KFC Spicy Chips as they came in the container.

The fries were, unfortunately, therefore not quite as gold and crispy as the description teases - and the “dusting of Tabasco flavoured sprinkle” was more of a deluge.

But still, we persevered, eventually becoming fully acclimatised to the strong Tabasco scent emanating from the cup, and strangely eager to delve into the pile of glistening red-speckled chips.

The first hit of flavour was strong, but familiar, to anyone who favours a few drops of Tabasco on their meals.

Fans of spicy food would likely recoil, but given the name that’d be an unfair criticism. But given the apparent over-seasoning of our serving, there was little subtlety in the flavouring. Still, we ploughed through several chips before retreating to pause and objectively consider the dish that lay before us. We decided we’ve done our duty for the taste test and would need to consume no more. But then, strangely, found ourselves returning back to the pile of chips for more.

The Tabasco salt has surprisingly powerful qualities, like many on social media have proclaimed, and although the chips were disappointing, and their dusting anything but light, we could definitely see ourselves reaching for these over the traditional KFC chips, especially at a time other than mid-morning - in fact, some have already suggested that in the early morning hours, after a few beers, may be the best time.

Some light research on the KFC website also revealed some interesting facts about the chips’ nutritional values.

The 260 grams of carbohydrates, 132 grams of fat, 8,099 milligrams of sodium, and a staggering 11.4 grams of sugar, among a selection of other ingredients, all contained in a single portion, had us less than enthused about the experience we’d just concluded - addictive Tabasco salt keeping up wanting more, or not. We're on board with the notion that this salt, in the right quantity, worked into a decent plate of chips, or another dish entirely, would be completely addictive.

Which is when we discovered Tabasco also sells its own flavoured spicy salt, which may just have solved all of our problems.