Cucumber Sprite is now in South Africa - its taste surprised us Sprite, the third most popular soft drink in South Africa (after Coca-Cola and Fanta), has just launched a new flavour: cucumber.

"We were inspired by our colleagues in Russia and so tested Sprite Cucumber with our South African consumers," Mukundi Munzhelele, senior brand manager of Sprite in South Africa, told Business Insider South Africa. "They confirmed our belief that this would be an exciting product to launch in South Africa." Business Insider South Africa tried it in our office, and the first surprise was how strong the smell was – a glass of the stuff carried a strong whiff of fresh cucumber.

But while the smell was surprisingly authentic, our tasters were divided on the taste.

For some, the cucumber added an interesting twist to the Sprite, a much-welcome new taste to a beverage which they believe has grown boring over the years. (The original Sprite has been around since 1961.) None of our tasters were turned off by the cucumber flavour, which is relatively strong – but a number immediately commented on an artificial sweetener taste.

In line with the introduction of the sugar tax in April this year, Coca-Cola has started to reduce the sugar content of its drinks and the new cucumber-flavoured Sprite contains both sugar and non-nutritive sweeteners: acesulfame-K and aspartame (containing phenylalanine). 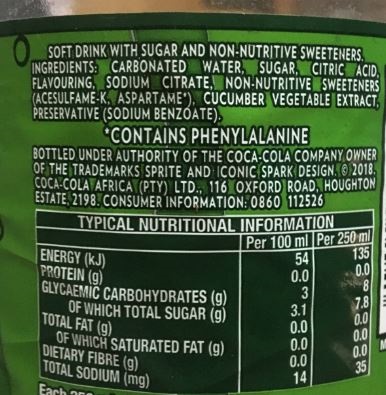 So far, a sugar-free cucumber-flavoured Sprite hasn't been released in South Africa.

Most tasters who didn’t know what the new flavour was thought it was watermelon.

One wiseguy guessed the new flavour was “E-number”, referring to the standardised names of food additives.

But the ingredient list shows that actual cucumber vegetable extract was used, explaining the authentic smell.

The tasters were divided on whether they would buy the new product. Slightly more than half wouldn’t, but the rest were immediate fans, and were making plans to mix it up with gin or for a Pimm’s cocktail, for which it would appear to be ideally suited.

The initial reaction on South African social media appears to be largely positive:

Getting a lil addicted to this lemon lime & cucumber flavoured @Sprite

The new lemon lime & cucumber flavoured sprite might just be my new fave ??

Big ups to https://t.co/yS1rM4ktfR @CocaColaCo @WorldofCocaCola @CocaCola for introducing the new Lemon Lime & Cucumber Sprite to South Africa! It’s delicious!Now, how about you also bring #CherrySprite here. Can’t see why only the United States should have that privilege...

There are many different Sprite flavours across the world. These include cranberry, cherry and tropical. Sprite also launched a limited edition flavour in honour of LeBron James. The drink was formulated to his taste, and features cherry and orange. Recently, Sprite Fiber+ was launched in China - which contains 30% of your daily fibre requirement.

When Business Insider SA asked Sprite South Africa whether other flavours could be brought here, Munzhelele said that "driving innovation is an important business priority".

"Whilst we can’t confirm anything at the moment, we are continually reviewing what we can bring to refresh consumers in South Africa."

Sprite Lemon-Lime Cucumber is available in 2 litre and 440ml bottles, as well as in a 300ml can.

Related Links
We tasted the first lab-grown sausage made without slaughtering any animals – here's what it was...
We tried chips from McDonald's, Steers and other takeaway joints - and the winner was clear
We blind-tasted ice-cream made from insect milk – and couldn’t believe the taste
Next on Business Insider
Are you depressed or just burned out? How to tell the difference and get the right treatment