We tested the new R5 bags from Checkers, Pick n Pay and Woolworths – and found that there’s really no excuse to use plastic anymore

Paper, plastic or bag? These days, bags come in all shapes, sizes and materials.

Some of the newest ranges of bags in stores are the larger-than-normal eco-friendly budget bags made by Checkers, Pick n Pay and Woolworths.

The retailers say they’re able to hold much more weight, last longer and are friendlier to the environment. For this you’ll pay a higher price point of between R3 to R5, compared to around 60c for your standard plastic 24-litre bag. According to Pick n Pay, the average lifespan of a reusable bag can equate to over 700 disposable plastic bags.

Business Insider South Africa devised a stress test to find out which of these in-store bags could handle the most weight – to see if they are worth the extra investment.

For the test we chose to fill the bags with the one item we all fear will shatter into a million pieces when on a cash-strapped shop– wine. We stocked up on the heaviest bottles we could find: Paarl Perle and Autumn Harvest.

Our goal was to fit as many wine bottles into a single bag and then shake it until the bag broke – it took some heavy lifting.

Our tests showed the bags in this range are well worth their price tag.

The three bags in this category performed well and were all able to hold 18.4 kg. One bag was a standout: it could have held even more if there was capacity. Checkers’ large ‘Planet Bags’ were introduced at a cost of R3.00 per bag. The cost is easily made back however thanks to a pay-you-50c-back every time you use it.

The bags are made with durability in mind. They are made from a thicker 70 microns of plastic, compared to the 24 microns for standard 24 litre plastic bags. They’re made from 100% recycled plastic (RPET) and are recyclable after use. You can certainly feel it when using it. It is much sturdier and more durable when putting in groceries.

In the past year, the Shoprite Group, which represents both Shoprite and Checkers, sold 700 million plastic bags made from 100% post-consumer recycled material, diverting 7,000 tons of plastic from landfill.

Nonetheless it held to full capacity at 18.4kg before coming apart on its side, at the seam. In terms of wines, that’s 5 Autumn harvests and 2 Paarl Perles – a lot of alcohol.

What makes the bag stand out is that it is made from recycled green plastic bottles. You wouldn’t know from the texture of the bag, which feels like material. The PET bottles are collected through municipal recycling programmes and an informal waste collection workforce of 75,000 collectors who earn a living from selling their PET bottles to recycling depots.

The bottles are then colour sorted manually or mechanically, before being washed and shredded into chips. The chips are then extruded into a RPET (recycled plastic) fibre that is then mechanically non-woven bonded together into a fabric. The fabric is then printed, cut and sewn into a budget shopper bag.

Once used, Pick n Pay says that the bag can be re-entered into the same recycling circle at its end of life. Pick n Pay said that when the R5 bag eventually becomes too worn, customers can bring it to their stores and have it replaced, at no charge.

The reason Pick n Pay are using green PET bottles is because the bottles tend to be left out of the recycling process due to lack of demand.

Collectors tend to get a higher price for clear bottles – as this fibre is used more widely – so they are more likely to pick up a clear bottle and leave a coloured bottle behind, unless they have space to transport it.

You would need to use it 9 times in order make up the difference in cost of purchasing one standard 24 litre plastic bag (55c). The most impressive bag was from Woolworths. It dealt well with the 18.4kg we could throw into it. It could have gone beyond that if there was more space.

What came as a complete surprise was that the bags held over 6kg more than their recommended weight, which Woolworths said was tested to carry up to 12kg. 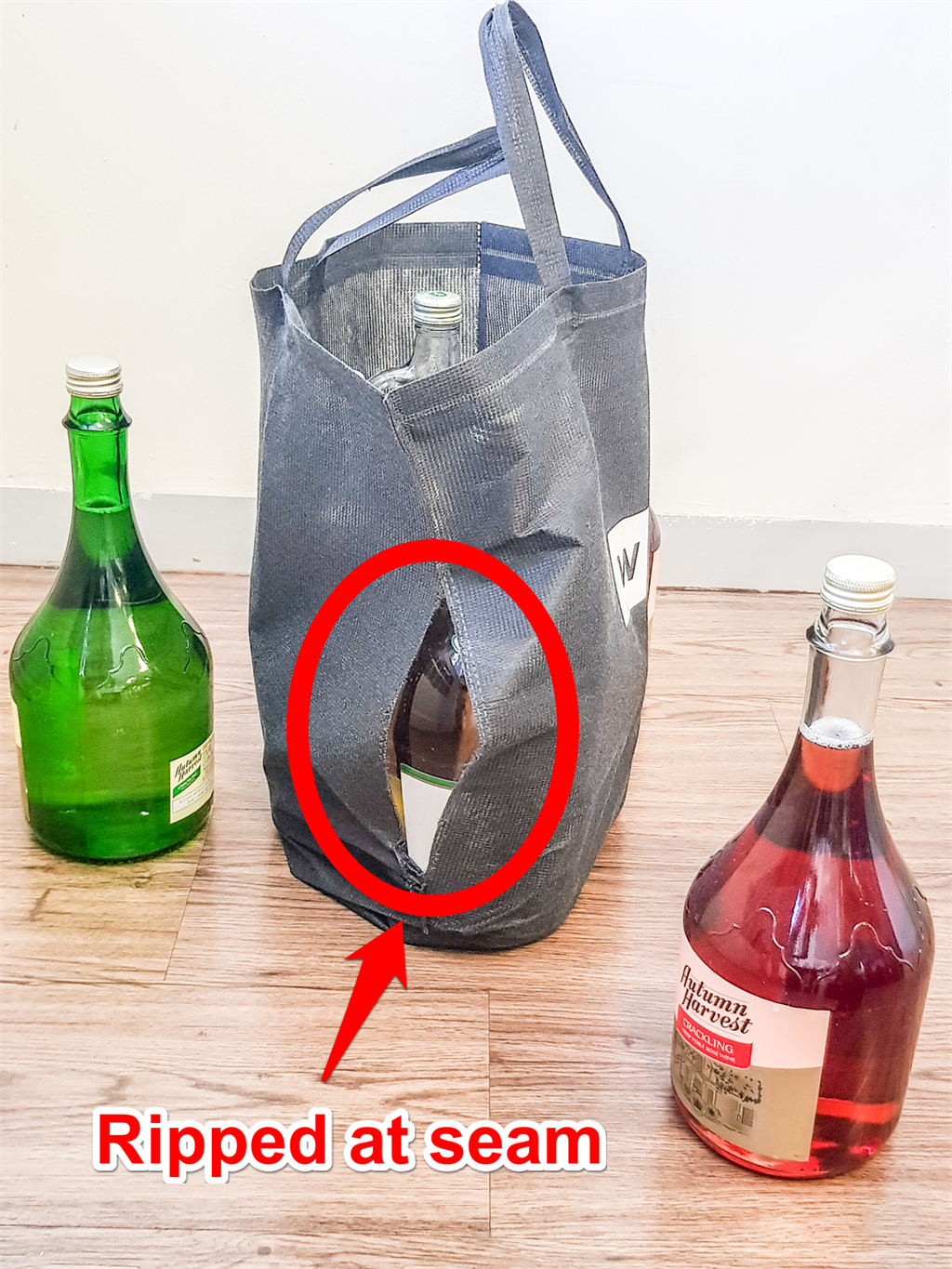 The slight downside is the that it was the most expensive bag in this range coming in at R5.50.

The bags were trialed in fours stores in the Western Cape last year. Business Insider spoke with Feroz Koor, Woolworths Group Head of Sustainability, who said that it went so well, they sold 80,000 less plastic bags compared to the same period as last year.

“We will shortly be announcing the next phase of the trials, extending our efforts to more stores arcoss the country,” said Koor.

The bags are recyclable and are made from 85% RPET plastic.

All three bags performed well during out weight stress test. In comparison to their plastic bag counterparts, they are well worth the extra investment.

Related Links
We tested paper bags from Checkers, Pick n Pay and Spar to see which can handle the most weight –...
We tested plastic shopping bags from Checkers, Pick n Pay, Spar, and Woolworths to see which can...
A whale washed up dead with almost 40 kilograms worth of trash in its stomach
Next on Business Insider
13 benefits of sex that can improve your mental and physical health